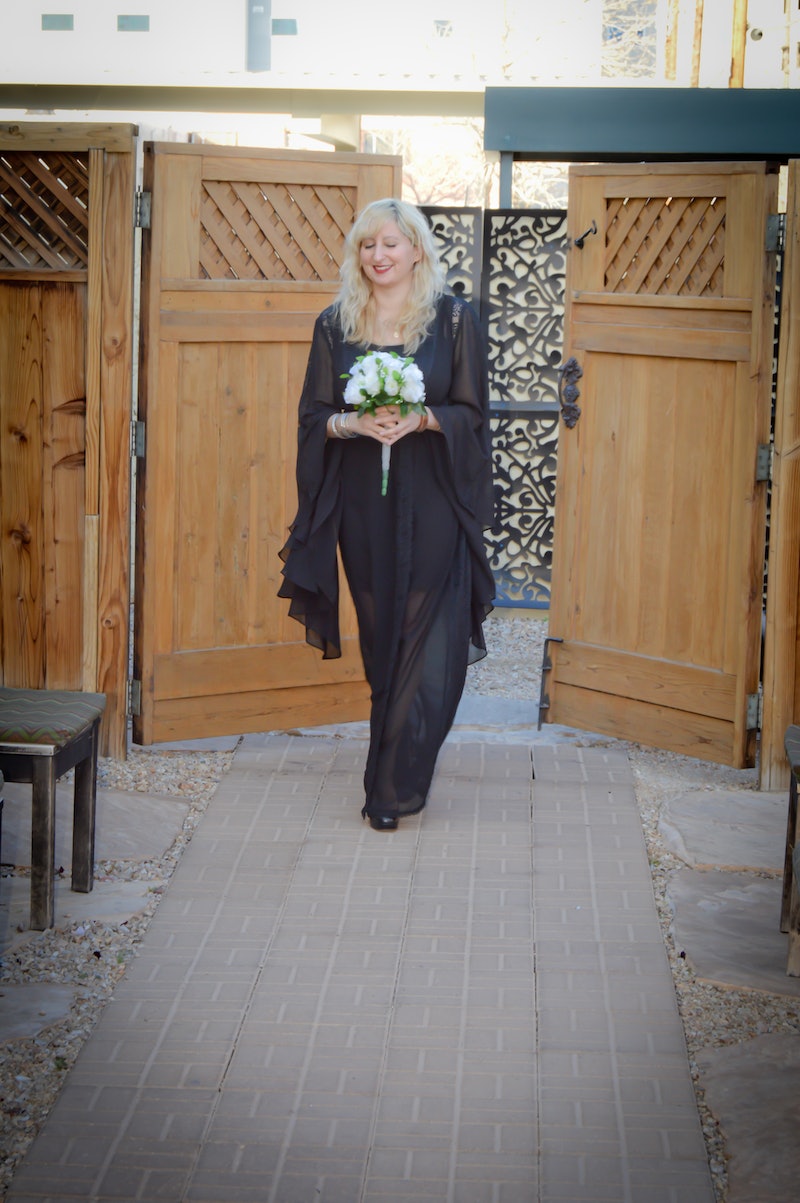 I hate it when people who are married go on and on about how they never thought they'd get married, but seriously: I never thought I'd get married. I spent my hard-partying twenties obsessed with the idea that romantic love was a capitalist scheme designed to make women emotionally vulnerable and hooked on self-help books and extremely expensive moisturizers. Though meeting my boyfriend Jesse changed my mind a bit, it didn't change my stance on getting married. We knew we loved each other — why did we also need the state government to sign off on this? This was romance, not building an addition onto a house.

But when my boyfriend and I kind of abruptly decided to get married for legal-type reasons at the beginning of the year, I was shocked to realize that the only kind of wedding I had ever allowed myself to imagine — going to the courthouse in the clothes I had worn to work that day, to symbolize that commitment was already part of the fabric of our daily lives — was kind of a turn-off for me. I discovered that I didn't want to get married in a place where people were also paying fines for burning leaves without a permit. Instead, I wanted to elope to Vegas, wear a cute dress, and instruct people to only take photos of my good side. I was shocked to find that I wasn't above some of the classic trappings of wedding culture that I had always thought myself too good for — it turned out, I was exactly good enough for them.

And so, I became curious about wedding planning calendars; those month-by-month preparatory guides that I had always thought only existed to shame brides-to-be ("What, you haven't bleached your teeth/guest towels/anus yet? But your wedding is three weeks away!"). I had been this wrong about who I was and what I wanted so far — what if wedding planning calendars actually contained crucial and calming advice about navigating this event that increasingly made me feel like I had no idea who I was? I decided to check and see.

12-4 Months Before The Wedding

Oh god, who even knows. Jesse had always been interested in getting married — his own folks had been happily married for 30 years, so to him, marriage was something people did in real life to show their commitment. Conversely, as the child of a traumatically hostile divorce, I thought marriage was something people did on TV, when the writers ran out of new plot ideas. As many of my friends married during our twenties, I was happy for them, but mystified as to why they had done it. Jesse and I were committed, but I had made it clear to him that marriage was not on the table for me. I just didn't see the point.

I am sure that I envisioned a cake at some point in this time period, though.

"Target areas...shape your brows" (Today Show); "Attend your shower" (The Knot); "I started weekly training sessions with Daria Werbowy’s former trainer Key Son about 3 months out." (Into the Gloss)

Over the fall, my boyfriend had been on tour with his band, where they were in a scary car accident in Louisiana — one where no one got hurt, seemingly by pure luck. At home alone in New York, I wondered about what would have happened if things in the accident had gone differently — if I'd had to rush out to a hospital in Louisiana, only to be told that the man I shared every aspect of my life with wasn't family, and that visiting hours were over. We knew we were a family — but, for the first time, it occurred to me that the rest of the world might not be so understanding. I started to reconsider.

One night, my boyfriend and I had a Very Deep Discussion about insurance and taxes, and decided that probably the best way to deal with all of this is to get married, as soon as possible — low key, just us, no guests, nothing schmancy. I closed the conversation by saying something painfully romantic like, "If you have any secret credit card debt, you'd better tell me NOW."

Consciously, I thought I was just being practical — this was just to make sure that people in positions of authority got the memo that we were a unit. But as we pinned down the details, I was surprised to hear some of the things coming out of my mouth. Like, I had always joked with Jesse about getting married in Vegas ... but I was now realizing I did actually want to get married in Vegas. I wanted to pay extra for the deluxe photo package. I wanted to buy and return nine different potential wedding dresses.

I thought I was some ultra-casual, rock 'n' roll-type person who didn't give a shit about things like whether other people thought I looked nice. Now, though, all of that seemed to be going up in a puff of chiffon.

I have spent my entire professional career writing about vaginas and boners and the time I pooped my pants at the convenience store (I had the flu, lay off), but this is the hardest thing I have ever had to type: I considered going on a wedding diet. This wasn't rough just because I have never actually been on a diet; it was rough because this went against not only who I thought I was supposed to be, but who the people I knew thought I was. My friends count on me to goof on juice cleanses, quinoa burgers, and people who tell you that kale is "yummy." I think dieting is mind-crushing patriarchal nonsense, designed to keep women from focusing on their dreams by keeping them focused on reworking their bodies for the pleasure of others.

But when I thought about the wedding, my brain turned to mush. Didn't I want to look good for the pictures (which I would post on Instagram once and then probably never look at again)? If I couldn't even figure out how to stop eating candy and tacos for the three weeks before my wedding, how could I ever achieve anything in life? It was like an alien had crawled into my brain. Maybe it had been in there the whole time, just waiting to strike.

In the end, the stress of my internal battle short-circuited whatever dietary urges I had had, and my eating habits went back to normal.

"Practice Restraint...Try to avoid salty foods, excessive carbohydrates, and do not overdo your exercise in the week before your wedding as all of these things cause your body to retain water and can result in a puffy face and eyes" (Vogue)

I repeatedly — some could say obsessively — took a "should you change your name when you get married" quiz, even though I had no intention of changing my name under literally any circumstances.

You know how sometimes you take a quiz that's like "Which Buffy The Vampire Slayer Character Are You?" and you go in with the understanding that you'll probably get Willow, but then also, you're willing to re-take it until you get Willow? And then maybe you take it two or three more times, with truthful yet slightly different answers, just to make sure that you really, truly, deeply are Willow?

That's how I felt taking this quiz. Obviously, I wasn't going to change my name just because an online quiz told me to, but I wanted some third party to kind of pat me on the back and say, "Yup, any fool could see that you're still the same old you even though you're getting married, which does not make you a tool of the man, even though as recently as two years ago you may have literally said the words 'Marriage is a tool of the man, man' to friends while on your third beer at some bar.'"

Even if you're trying to be non-traditional, there's something about wedding preparation that is identity-shredding. Or there was for me, anyway. At this point, I had still only told a handful of my friends about our wedding, because I couldn't deal with thinking about the weird wedding-fixated pod person I seemed to be becoming. How could I explain to them not only that I had changed my mind about marriage, but also that I had now woken up in the middle of the night, convinced I would spend the rest of my life awash in regret that I didn't get a wedding updo?

I became fixated on celebrities who seemed to have long, successful marriages, a category which, as far as I could tell, included only Sting and the woman who is married to Sting. I made a mental note to start doing yoga when we got back, just in case core strength and increased flexibility were the cornerstone of long-term successful partnership.

In the 24 hours before my wedding, Runaway Bride went from being an improbable rom-com to a documentary about my life. I woke up with a pit in my stomach, and an inexplicable urge to go. What was I scared of? What did I think was going to happen? I have no idea — I didn't think our wedding would change our relationship, and I didn't have any qualms about my love for Jesse. I only know that, all day, I had to use every ounce of self-control to not leave a polite note, slowly crawl out a window, and board a bus to San Diego.

After a morning occupied by my nervous diarrhea and application of roughly 30 layers of mascara, I texted a friend: "I guess this is actually happening??"

The ceremony felt both real and unreal — I could feel the sun on my face and the wind rustling my dress, but I was also outside myself, watching. Nothing bad was happening. I wasn't changing. The generic secular service wasn't, as I had feared, some kind of black magic ritual, permanently transforming me into Wedding Me, some being obsessed with photo angles and portion control, permanently unsure of herself.

I had been afraid that making this commitment would somehow change not our relationship, but me. I always thought of the reckless, wild child I had been in my 20s as the "real me," as if my tenure in the world of folks with jobs and reasons to not drink tequila on a Tuesday was only temporary.

But even drunk, "partying me" wasn't the real me. She'd used glitter and flashiness to keep everyone at arm's length, because she thought if anyone got any closer, they'd be horrified. Wedding Me had been an extension of that — I thought I had to have everything perfect on this day, to keep Jesse from seeing the truth about me, but I was realizing now that the truth was what he actually liked about me. I had let one person get close, and I just couldn't fucking believe that he saw who I really was and wanted to keep seeing it for the rest of his life. I would have cried, if I weren't so concerned about all that mascara.