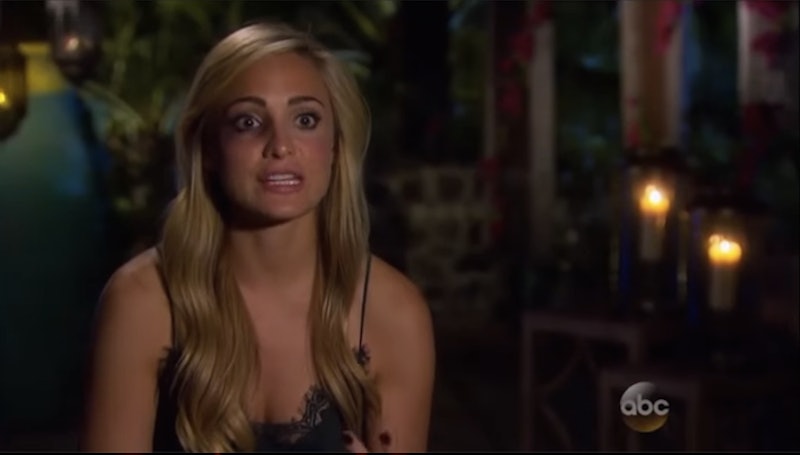 Not all heroes wear capes and not all detectives have a magnify glass — enter me, a self-proclaimed super-sleuth who thinks that hours of Criminal Minds and Law & Order: SVU has somehow qualified me to open up a Bachelor detective agency. The first (and really only ) mystery to solve: who hit Leah in the face on The Bachelor ? Leah's time on The Bachelor may be over, but season previews are forever, meaning a lot of fans are still wondering how Leah got the black eye from the Bachelor promo shown at the beginning of the season, and why was it never explored on the show. Bustle reached out to ABC who declined to comment, and to Leah who has not yet responded.

So, I grabbed my notebook (OK, I mean "Hulu account password"), and gladly took on the case of The Mysterious Black Eye, because that's what any true Bachelor fan would do. The approach to cracking the case was tedious — re-watch all episodes to find out when Leah would have been hit in the face and/or when she was wearing the same outfit as the scene in the promo. I never said this was going to be easy, but I did it because I care. After re-watching a couple of episodes, I learned one thing — Leah was barely shown, making her villainous end on the show that much more confusing. The real mystery should have been where Leah came from, but I digress. As they say, you either die a hero, or you live long enough to see yourself become the villain. I guess in The Bachelor world, Week 6 is "long enough."

To remind you, here is the only piece of evidence I had going into the case. In the promo, Leah is seen with what appears to be a black eye saying, "This b*tch is crazy. She hit me in the face," cutting to Lace, as if to suggest that Lace was the one who hit Leah.

It's a curious case, because not once throughout Leah's stay on the show was she ever shown to have a black eye outside of that promo. So, the search continued for the black lace dress Leah was wearing in the photo above. Sure enough, when Week 3's rose ceremony came around, Leah was there in the same dress. The only thing missing? A black eye. Observe: Below is an image of Leah talking to Jubilee after Jubilee gave Ben a massage, before the rose ceremony took place and during the cocktail hour. There seems to be a shadow over her eye (presumably from her hair), but it appears as if she doesn't have a black eye, though, to be fair, the shadow makes it hard to tell.

But, here, we have Leah sitting around with the group with a clear shot of the eye in question. This screenshot was from the cocktail hour as well, before the rose ceremony. There seems to be no black eye.

Finally, here is a photo of Leah during the rose ceremony. As you can see, there seems to be no shadow or anything around her eye here either.

So, that's what we can offer in explanation to the great mystery of The Mysterious Black Eye, even though it's not a definite answer. Hopefully, the illustrious Chris Harrison will give more information on this during The Women Tell All. In the meantime, I'm accepting cases for other TV mysteries, but only if they involve the tedious work of watching episodes where Ben Higgins is featured.