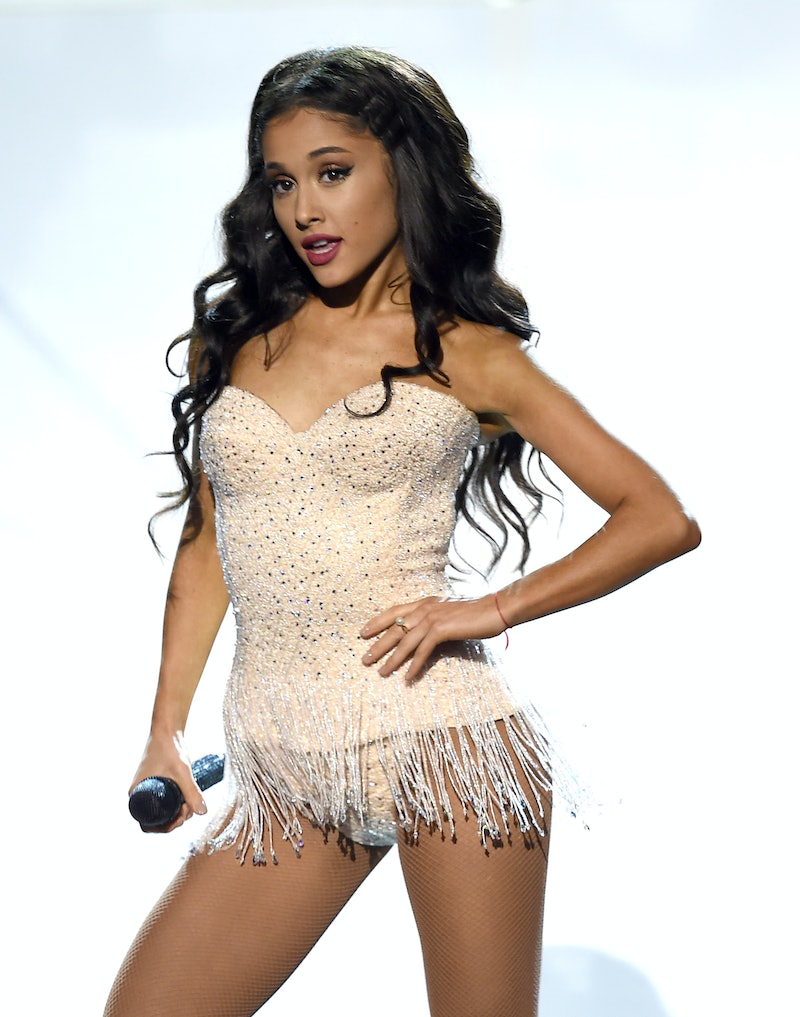 If you're one of those people (me) who believes you can never really be friends with your exes, Ariana Grande is here to prove you wrong. Because not only is Grande still friends with ex-boyfriend Nathan Sykes, she even recorded a love ballad with him post-breakup. And there is truly nothing that says "over it" like recording a heart-melting track that includes lyrics like "So don't ever think I need more, I've got the one to live for / No one else will do, yeah, I'm telling you / Just put your heart in my hands / Promise it won't get broken / We'll never forget this moment / It will stay brand new / 'Cause I'll love you over and over again." To quote that ever popular meme, one does not simply sing a love duet with her ex, unless she's totally cool with being friends with him. And obviously, Ariana Grande is.

But let's rewind: Before Grande and Sykes got to this totally awesome place of being friends after their late December 2013/early January 2014 breakup, there was a whole relationship that had to happen first. Sykes officially announced their relationship in September 2013, though they both made it clear that they were a thing for a few months before that. And though they romanced their way through the fall and early winter of 2013, the "Focus" singer revealed in January 2014 that they had ended things. Fortunately for our ears, time is an amazing thing and exactly two years later, we were #blessed with "Over and Over Again":

Speaking to Entertainment Tonight about working with his ex — who he also collaborated with on her 2013 track, "Almost Is Never Enough" — Sykes said that he was pretty transparent and straight-forward with Grande while collaborating on "Over and Over Again."

"I spoke to [Ariana] and I was like, 'It's only as awkward as everyone else makes it,'" he revealed. "If we don't make it awkward, then at the end of the day, after a couple of weeks, it's not going to be awkward anymore.'" Fair enough, but he also was well-aware what the media reaction and fan frenzy was going to be like.

"I think it's a very easy storyline for everyone in the media world," Sykes said. "I think as soon as everyone found out we were doing this, it was like, 'Headlines for days! Thank you so much, Nathan and Ariana, that is so kind of you!'"

Still, Sykes was quick to praise Grande's talent and vocal ability, as well as their mutual maturity in working together professionally after a breakup.

"It's not weird to me at all. I think the most important thing for me is that she's an incredible vocalist and I really think she brings something great to the song," he added. "I think it shows real maturity that we can both do this and not really let it bother us."

As for Grande's reaction, it's clear that she's just as supportive of her ex, tweeting him her congratulations and thanking him for having her on the track:

This is what a REAL happy ending looks like, don't you think?