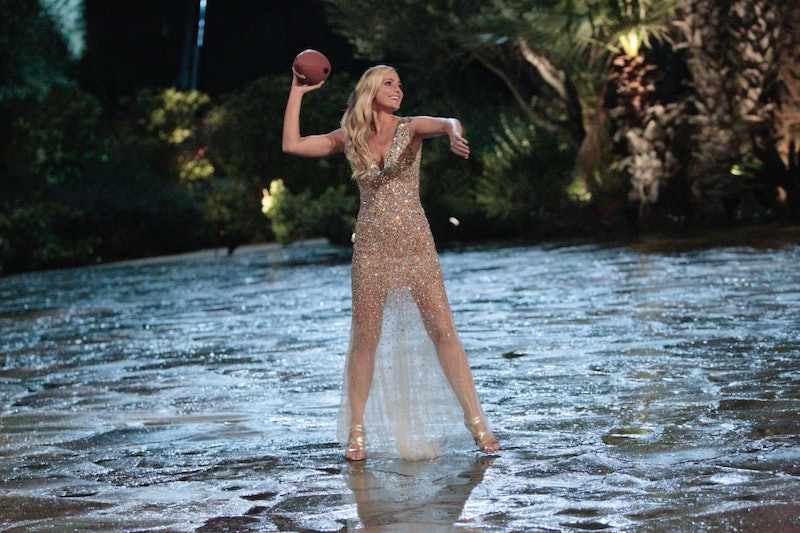 People who are fans of reality shows know that editing can have a major hand in how a contestant is perceived by the public. Take Leah from The Bachelor , for example. For many weeks she was pretty much unknown and then bam! she was the biggest troublemaker in the house. Is that true to life? ABC declined to comment on Leah's edit on the show, but what has the contestant herself said? How does Leah feel about her portrayal on The Bachelor ?

She certainly made an impression on Ben the first time she met him by showing off her sporty side with a casual football toss. At first, Leah seemed to be a friendly, fun girl, but there wasn't too much of an intense connection with Ben, which is perhaps why she seemed so upset in the Bahamas. She was shown being jealous of Caila's one-on-one date and telling Ben that Lauren B. was one way in the house and one way with him (a classic Bachelor complaint). It all seemed to come to the forefront rather abruptly, but maybe that's just how Leah expresses her frustration. Either way, I took a look at her social media to see how Leah feels about the edit she got on the show. Bustle also reached out to her for comment, but has not yet received a reply.

She's Not Embarrassed Of Her Actions

Even though Leah's initial introduction was a little silly, she didn't back down from it at all. (And, who doesn't have a silly Bachelor intro?) She also rocked some intense clown makeup during one date, proving she was totally game for anything. I love a girl who can stand by her choices and not be ashamed of coming off goofy!

She Joked About Her Appearance

As any woman who runs into their crush when they're in full "sweatpants, hair tied, chillin' with no makeup on" mode knows it's alright to cringe a little when you see yourself au natural. Although she's a total beauty in any state, I relate to these sentiments.

She's BFF With Her Competition

Though her elimination episode clearly tried to depict her as being jealous of the other women's one-on-one time with Ben, it seems that Leah got a few very good friendships out of the time she spent on The Bachelor. Leah posted recent pics with Caila Quinn, and gave some birthday love to Lauren Bushnell, as well as retweeting Olivia and Amanda. She really doesn't seem to be that catty or competitive — way to find friends in a hopeless place, Leah!

She Poked Fun Of Her Lack Of Air Time

Leah made it pretty far, so there must have been much more to hers and Ben's relationship than made it to air. She made light of it, however, with tongue-in-cheek Twitter posts and retweets from fans that complained about her lack of air time. I agree that we should have seen more of her and those on fleek eyebrows!

Though she is gone now, she is not forgotten. Keep on with your strong attitude and sense of humor, Leah! Bachelor Nation loves ya.