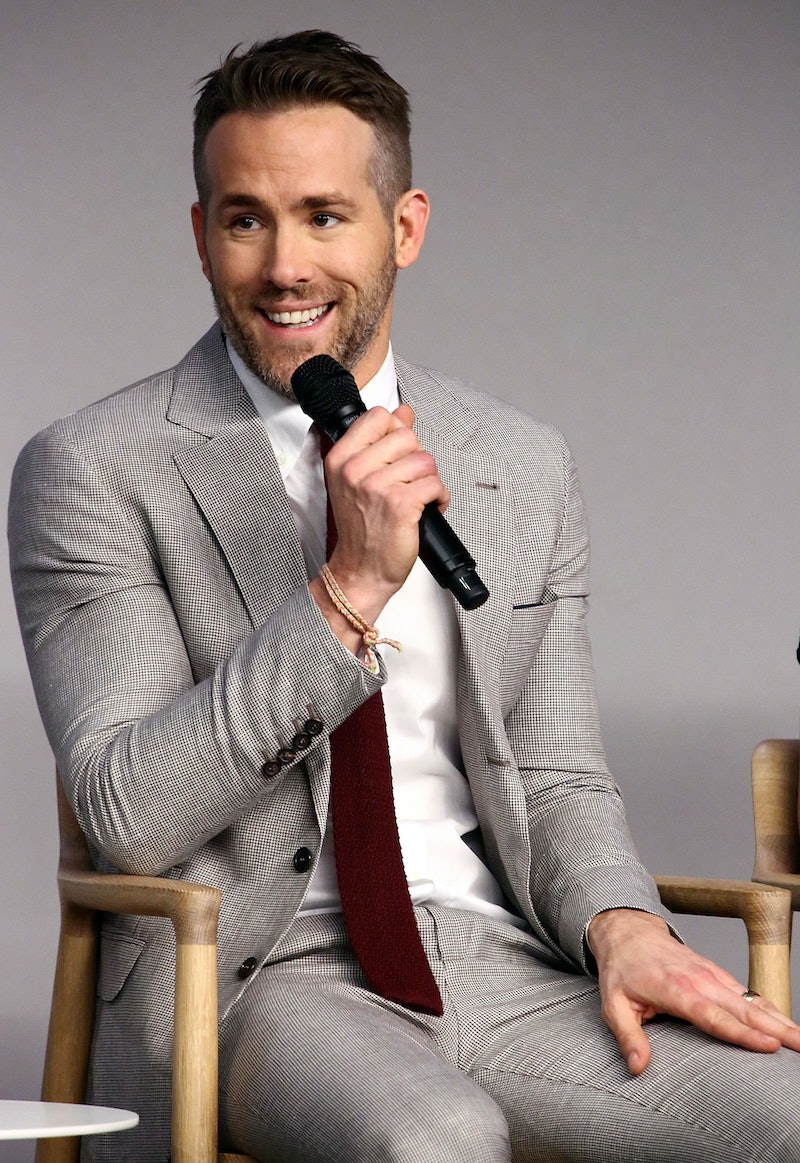 Quick question: Did you see Deadpool this weekend? Chances are extremely high that you did, considering the Ryan Reynolds-helmed superhero movie shattered records with a $135 million opening weekend, the biggest debut for an R-rated movie ever in history. (The previous record-holder was 2003's The Matrix Reloaded with a paltry-by-comparison $91.8 million.) Of course, rather than basking in the film's success, Hollywood has to immediately get to the bottom of why it did so well — so they can be sure to replicate its success as quickly as possible. But in doing so, one exec may have unintentionally started a war with Guardians Of The Galaxy director James Gunn… along with a little help from Deadline Hollywood.

What exactly does the new 20th Century Fox film have to do with the 2014 Marvel Studios smash? I'm glad you asked. In Deadline's Sunday report of Deadpool's unexpectedly large box office haul, the publication quoted an unnamed "suit" (not from Fox) as having said the following:

The film has a self-deprecating tone that’s riotous. It’s never been done before. It’s poking fun at Marvel. That label takes itself so seriously, can you imagine them making fun of themselves in a movie? They’d rather stab themselves.

Ironically enough, the character of Deadpool comes from the Marvel Comics stable, although the film rights were sold to Fox along with the X-Men and the Fantastic Four in 1994 — well before anyone know superhero movies were going to be such a bonanza. But Gunn wasn't about to take any guff, even from a cinematic cousin, and crafted a lengthy response on Facebook that managed to both defend Marvel Studios while praising Deadpool, all while making eloquent statements about Hollywood itself. After quoting Deadline's anonymous "suit," the director went on to say:

I love Deadline and get a lot of my film business news from them. And I love Deadpool even more — the film is hilariously funny, has lots of heart, and is exactly what we need right now, taking true risks in spectacle film — but COME THE F*CK ON. That's no reason to rewrite history. This quote has to have been said by the dumbest f*cking Hollywood exec in the history of dumb f*cking Hollywood execs.

Let's ignore Guardians for a moment, a movie that survives from moment to moment building itself up and cutting itself down — God knows I'm biased about that one. But what do you think Favreau and Downey did in Iron Man? What the f*ck was Ant-Man??!

After every movie smashes records people here in Hollywood love to throw out the definitive reasons why the movie was a hit. I saw it happen with Guardians. It 'wasn't afraid to be fun' or it 'was colorful and funny' etc. etc. etc. And next thing I know I hear of a hundred film projects being set up 'like Guardians,' and I start seeing dozens of trailers exactly like the Guardians trailer with a big pop song and a bunch of quips. Ugh.

Deadpool wasn't that. Deadpool was its own thing. That's what people are reacting to. It's original, it's damn good, it was made with love by the filmmakers, and it wasn't afraid to take risks.

It's hard to find fault with Gunn's argument here. Guardians is an incredibly tongue-in-cheek movie, so to hear a Hollywood executive claim that Marvel can't make fun of themselves is a bit odd. And Ant-Man sailed to success just last July on the backs of such praise as The New York Times review, which referred to the film as "bright" and playful" and containing "cartoonish whimsy and smirky humor."

And Gunn is absolutely right about Hollywood's tendency to try to replicate old successes rather than craft new ones. The renaissance of comic book films that we're in post-X-Men and -Spider-Man is living proof. See also: the explosion of Young Adult adaptations post-Harry Potter or the explosion of fantasy series post Game of Thrones

Speaking of Game Of Thrones, this is definitely one aspect in which television is stronger than movies — and accounts for the explosive success and expansion of the medium over the past few years. Television executives don't seem nearly as scared to try new things as their feature film counterparts. Just look at the diversity of shows like black-ish, Empire, Fresh Off The Boat, How To Get Away With Murder, Master Of None, Orange Is The New Black, Scandal, Transparent, and many many many more.

Gunn agrees that film execs need to step up their game if they hope to keep drawing crowds away from their living rooms and into the cinema:

For the theatrical experience to survive, spectacle films need to expand their definition of what they can be. They need to be unique and true voices of the filmmakers behind them. They can't just be copying what came before them.

So, over the next few months, if you pay attention to the trades, you'll see Hollywood misunderstanding the lesson they should be learning with Deadpool. They'll be green lighting films "like Deadpool" - but, by that, they won't mean "good and original" but "a raunchy superhero film" or "it breaks the fourth wall." They'll treat you like you're stupid, which is the one thing Deadpool didn't do.

But hopefully in the midst of all this there will be a studio or two that will take the right lesson from this - like Fox did with Guardians by green-lighting Deadpool - and say - "Boy, maybe we can give them something they don't already have."

And that's who is going to succeed.

Hollywood's aversion to risk and their "more-of-the-same" mentality is exactly what leads to things like the second year in a row of #OscarsSoWhite. How can "suits" see the massive popularity of something like Empire and still refuse to acknowledge the viability of minority voices? There are a plethora of stories out there to tell, so why do we keep repeating the same ones? That's why Deadpool was such a hit: it told a new story in an exciting way amidst a sea of sameness. (I'm already feeling the fatigue from this year's slate of superhero mashups: Batman vs. Superman in Batman V Superman, Captain America vs. Iron Man in Captain America: Civil War, and Daredevil vs. the Punisher in Daredevil Season 2.)

Now, instead of wasting time pitting two enviable successes against each other for no discernible reason, hopefully all those Hollywood execs out there will devote themselves to bringing us fresh and exciting new stories. Or James Gunn just might sic his pet raccoon on them.