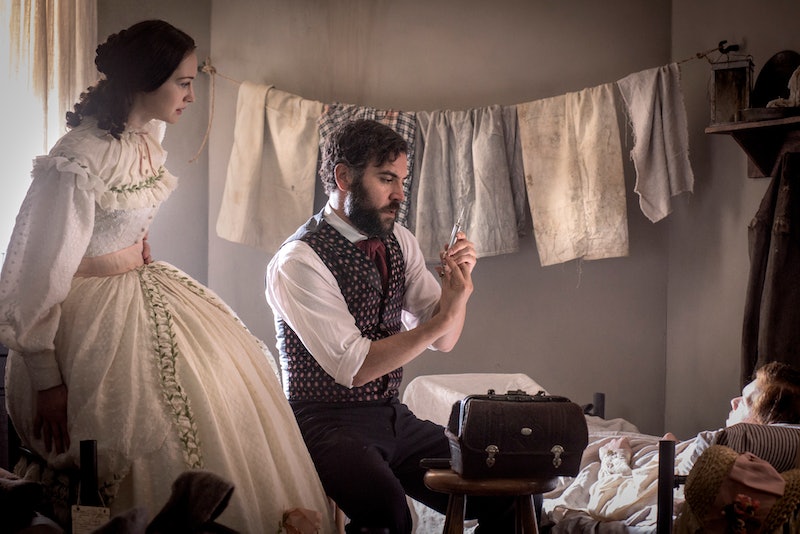 There are a lot of great things about PBS' programming, but one thing that I'm not so into is the fact that its series often have very few episodes. Granted, many of its TV offerings are British imports or are of the miniseries variety where a season full of just a few episodes comes with the territory. Even though you know that's just the way it is, it doesn't make the fact that a TV series you've just gotten really into is about to end for the season with only five episodes down and one more to go. That's exactly what's happening with Mercy Street , which we now have to wait and see if it returns for Season 2.

No, even with the Season 1 finale of Mercy Street airing Sunday, Feb. 21, PBS has unfortunately not yet confirmed or denied that Mercy Street will return for Season 2. However, the network has done a bit of hinting that this might not be the end of the road for the show. “I have not seen scripts for Season 2 and I know you’re trying desperately to get me to say Season 2," PBS President and CEO Paula Kerger said at TCA last month, as reported by Deadline. "We have very much let the door open for Season 2 and done what we can to make sure there can be a Season 2."

So it sounds like a Season 2 for the period drama set at a hospital during the Civil War is certainly not out of the question. PBS seems to have done whatever it could to make its original series a hit since the beginning, such as having it follow TV juggernaut Downton Abbey and nabbing well-known (not to mention youthful) talent like Josh Radnor and Mary Elizabeth Winstead. Those efforts seem to have paid off with Mercy Street scoring 3.3 million viewers during its premiere episode last month, a household rating 16 percent higher than the Season 3 premiere of Sherlock, which followed Downton Abbey in January 2014, according to Deadline. Though it's possible the ratings for Mercy Street have dipped since then, that's a definitely respectable figure for PBS that should warrant its series another season.

But whether you need something to watch as we wait and see if this series will get picked up or if Season 1 does end up being all we'll ever get, there are luckily plenty of other period TV dramas for you to get your history on in the meantime. Here are the ones you should put at the top of your list.

It's no surprise that Mercy Street follows Downton Abbey on PBS. Though the series take place in two completely different countries and time periods, there's enough history and drama in both to keep you entertained and enlightened throughout each episode. Downton Abbey is, of course, probably the most famous period drama on TV right now, and for good reason. This series about an English aristocratic family and their servants is scandalous, sassy, sweet, and sublime, usually all at the same time. With the sixth and final season about to wrap up in just a couple of weeks, there's no time like the present to get acquainted with the Crawleys.

If you're looking for a period drama that's a bit more American and a bit closer to the time period in which Mercy Street takes place, TURN: Washington's Spies is one of your best bets on TV right now. As a period drama that follows a spy ring during the American Revolution, TURN delivers its fair share of heart-pounding moments as any thriller does. It also packs a lot more action than Mercy Street, but that's kind of what you'd expect when you're comparing series that cover espionage and medicine.

The only good thing about Downton Abbey ending is that Call the Midwife should start up a new season on PBS after it. Though it might not attain the same notoriety and ratings as its fellow British import, Call the Midwife, which follows a group of midwives and nuns in East London in the 1960s, delivers the highest of highs and the lowest of lows as well as any acclaimed series out there. With its knack for exploring issues of gender, race, class, and sexuality at the time all through the lens of new mothers and those who help bring their bouncing bundles of joy into the world, the drama featured in Call the Midwife is so much bigger than just birthing babies.

With the success of Mad Men and the ways in which it has changed the contemporary TV landscape, you almost forget that it's a period drama. But with the series following the employees of a Madison Avenue advertising agency and taking place from 1960 to 1970, it totally is. The style of the '60s is one reason why Mad Men is so fun to watch. But check out the series for yourself, and you'll soon see that setting the show in any other decade just wouldn't work.

Don't let this seemingly silly-sounding name fool you; Peaky Blinders is no joke. This Netflix drama about gangsters in early 20th century Birmingham, England is some of the roughest and toughest TV you'll see today. Hold onto your hats while watching this series (but watch out for the razor blades).

OK, so Another Period is a comedy that is more of a satirical take on period dramas rather than being a period drama itself. However, if you appreciate period dramas, you should find this Comedy Central series to be a good time. If you've ever thought that Downton Abbey just gets a little too ridiculous sometimes, well Another Period, which is basically an American spoof of that, will exacerbate those moments, much to your delight.

But if none of these historical period dramas tickle your fancy, there's probably one out there covering a time and a place that will. And hopefully, Mercy Street will return before you're searching for long.