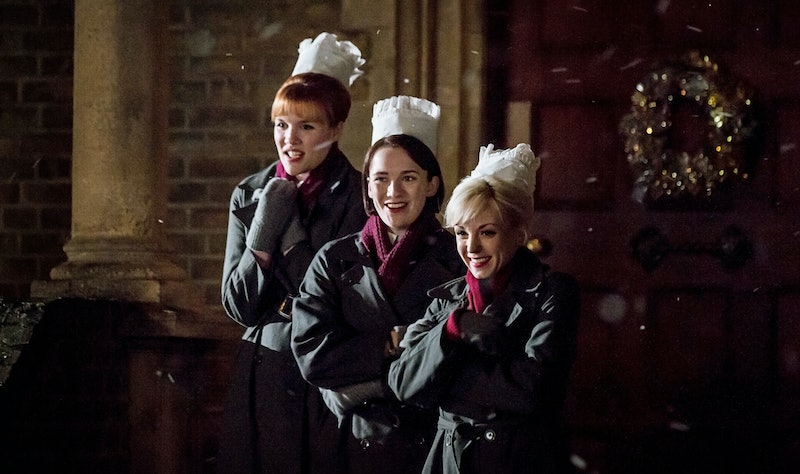 Watching Rudolph the Red-Nosed Reindeer, A Christmas Story, and It's a Wonderful Life may all be a part of your yuletide entertainment every year, but you should really make room for one more holiday special on your DVR. The 2015 Call the Midwife Holiday Special airs on Friday, Dec. 25 at 9 p.m. ET, and it looks like it's going to be a particularly magical episode this year. With more births on the way and a teased reunion between Patsy (Emerald Fennell) and Delia (Kate Lamb), all of this intense yet still heartwarming drama is sure to whet your appetite for when Call the Midwife returns for Season 5.

So when will that be exactly? Well, PBS, the network on which Call the Midwife airs in the United States, hasn't announced an official premiere date for the mid-20th century period drama just yet. However, since Call the Midwife premiered in 2012, it has traditionally aired sometime in late January on the BBC in the United Kingdom before hopping across the pond to begin airing in the U.S. in late March, after Downton Abbey finishes its run over here on PBS.

Speaking of Downton Abbey, though Call the Midwife is a much-beloved British import to the U.S., it doesn't seem to have inspired the same amount of fervor over here as its fellow period drama. I think that's a shame, because Call the Midwife is just as good (if not better, quite frankly) of an hour of television as what the Crawleys and their downstairs servants serve up. Plus, with a sixth season of Call the Midwife already in the works for 2017, if you're not already on board with the nuns and nurses of Nonnatus House, you really need to change that — and quick. If for some reason you still need convincing as to why your New Year's resolution should be to catch up with Call the Midwife, the following six reasons should do the trick.

1. It's Unlike Anything Else On TV

You don't see a story like the one featured in Call the Midwife on TV every day — or ever. Based on the best-selling memoir of Jennifer Worth by the same name, originally published in 2002, Call the Midwife chronicles the experiences of nuns and nurses living and working together as midwives in Poplar, a poverty-stricken area of London's East End, during the 1950s. With babies, religion, and class issues just some of the things at play in this series, you better believe each episode is a nail-biter.

Of course a show about the miracle of life will have you feeling all warm and fuzzy inside by the time the preview of scenes from next week's episode rolls around. Though getting to the end product is never easy, those giving birth and assisting with the birth often express a newfound love for the newborn, their loved ones, and most importantly, themselves. Call the Midwife is one of those shows that your heart won't be able to help but feel full after watching it.

Unless of course, the episode completely devastates you, which Call the Midwife also has a habit of doing. That's because, as we all unfortunately know, childbirth can also be a very unpredictable and dangerous process for the mother and child. As with many British TV shows, Call the Midwife isn't afraid to kill characters off or depict a not-so-happy ending. Not to mention, the nuns and nurses of Nonnatus House have their own problems that they need to sort out. Call the Midwife really keeps it real, and even though you may feel sad after watching it, having that kind of quality in a series always helps you to better connect with it in the end.

4. It's All About The Female Experience...

Of course, you would expect a show featuring nuns, nurses, and mothers to be female-heavy, but just because a drama has a lot of women in it doesn't mean it's going to make you learn or feel something about what it was like to be a woman in the 1950s. Well, Call the Midwife certainly does that, and it paints a complex portrait of women's roles, emotions, and ambitions as mothers, daughters, sisters, lovers, friends, employees, and everything in between. This show will make you see how far we've come in 60 years — and how far we haven't.

Perhaps the reason why Call the Midwife is able to so effectively communicate stories about the female experience is because it's a show with a lot of women behind it, which is unfortunately not something we see too much of these days. Heidi Thomas is the creator and writer of Call the Midwife, which also features Pippa Harris as executive producer and many other women writing for and directing episodes of the series. Part of the reason why I think Call the Midwife hits you so deep is because its creative team really understands women.

6. But It Includes A Lot Of Different Voices

But as much as Call the Midwife focuses on the ladies, it also gives voice to other groups of people that have historically been marginalized in society. Call the Midwife also presents stories about race, immigration, poverty, and homosexuality, all of which help the series give a more comprehensive account of issues bubbling underneath the surface of life in London's East End — and in other parts of the world — in the 1950s that would receive more attention in years to come.

All in all, Call the Midwife will truly make you laugh, cry, and think. I really can't imagine what more you could want out of a TV drama, so why look any further?