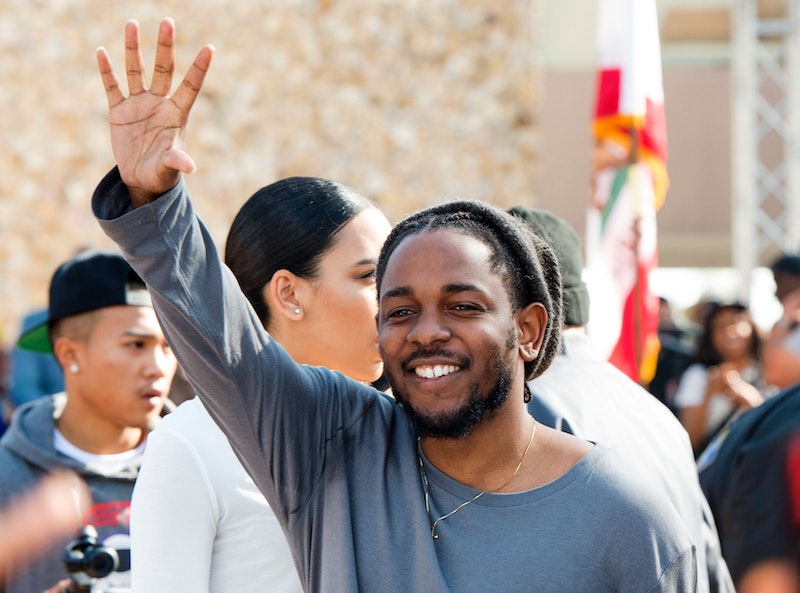 There's often a headlining rivalry for any awards show, and for the 58th Annual Grammy Awards Monday night, the names in lights are Kendrick Lamar vs. Taylor Swift. They have the most nominations going into the ceremony, Kendrick Lamar with an impressive and historical 11 nominations, and Taylor Swift close behind him with seven. The main event: who will win album of the year, Kendrick Lamar or Taylor Swift? Lamar's To Pimp A Butterfly is up against Swift's 1989, but Kendrick vs. Taylor face-off is about so much more than these two artists (who are friends and collaborators with no bad blood between them). To the victor go the spoils, but the chosen winner will also reveal if the music industry has been paying attention or made any progress by recognizing diverse artists this year.

Lamar's second full-length album To Pimp A Butterfly has earned him an astounding 11 nominations, the biggest being Album Of The Year. He is the second artist ever to receive so many nominations for a single year, second only to Michael Jackson who earned 12 nominations for Thriller in 1984.

But Lamar is unfortunately the victim of some of the worst Grammys snubbery. In 2014 the 28-year old rapper from Compton was beat by Macklemore in the rap categories and for Best New Artist, and good kid, m.a.a.d. city (still) shockingly went home without any recognition. Now the white artist on the other side of K Dot is Taylor Swift.

Of course, Swift can't help that she is white. But she is a very beautiful woman with unlimited resources and a squad of equally gorgeous and powerful privileged women. Yes, she has a great voice and great songs and great cats, but she is by no means as normal of a gal as her image sometimes suggests. 1989 broke tons of chart records and raked in like, a crap ton of money along the way. Fuse put together the numbers, and the stats are impressive: 1989 sold 1.287 million copies in a week, had three number one singles ("Blank Space," "Shake It Off" and "Bad Blood,") and, as of October, had sold 5.4 million copies. For a female recording artist, that is amazing and commendable.

But Taylor Swift has So. Many. Grammys. Before the seven nominations for tonight's ceremonies, Taylor Swift had already earned 19 Grammy nods and took home seven of those Golden statues. Her first win was in 2010 for her album Fearless, making her the youngest artist to win the award. Which, again, is great — but it's obvious the Grammys really, really unabashedly love Taylor Swift.

On the other hand, Lamar has a measly two Grammys on his shelf. Not to undercut his achievement — he more than earned those statues for his single "i." This year Lamar has become the black artist who must — without choosing to — represent the diverse talent in the music industry that sometimes goes unrecognized. But tonight's ceremony could make a small step towards dismantling the monopoly of white winners at awards shows; or, we could end up with #GrammysSoWhite.

Kendrick vs. Taylor is about race, a representation of essentially the two sides of the music industry right now. Lamar came full-force with his aggressive, passionate, and politically damning record To Pimp A Butterfly, and he said himself in Billboard's most recent issue of his eleven nominations that he "wants to win them all" because he feels like TPAB is his best work. And the critics agree — Rolling Stone lauded the album as "a masterpiece of fiery outrage, deep jazz and ruthless self-critique."

Does that mean Taylor "deserves" to lose? No, but she shouldn't automatically win, either. It's been long overdue for Kendrick Lamar to be recognized for his beautiful, poetic, dark, history-making and history-telling rap. Not only that, but it becomes harder and harder to forgive the Grammys' shortcomings when honoring black artists. Their particular diversity problem: doling out a lot of nominations to black artists but rarely giving them the awards. Particularly troubling is the fact that over the past 20 years, only five minority artists have won Album Of The Year, among them Lauryn Hill and Outcast, though 35 were nominated. I want to see Kendrick at number six.