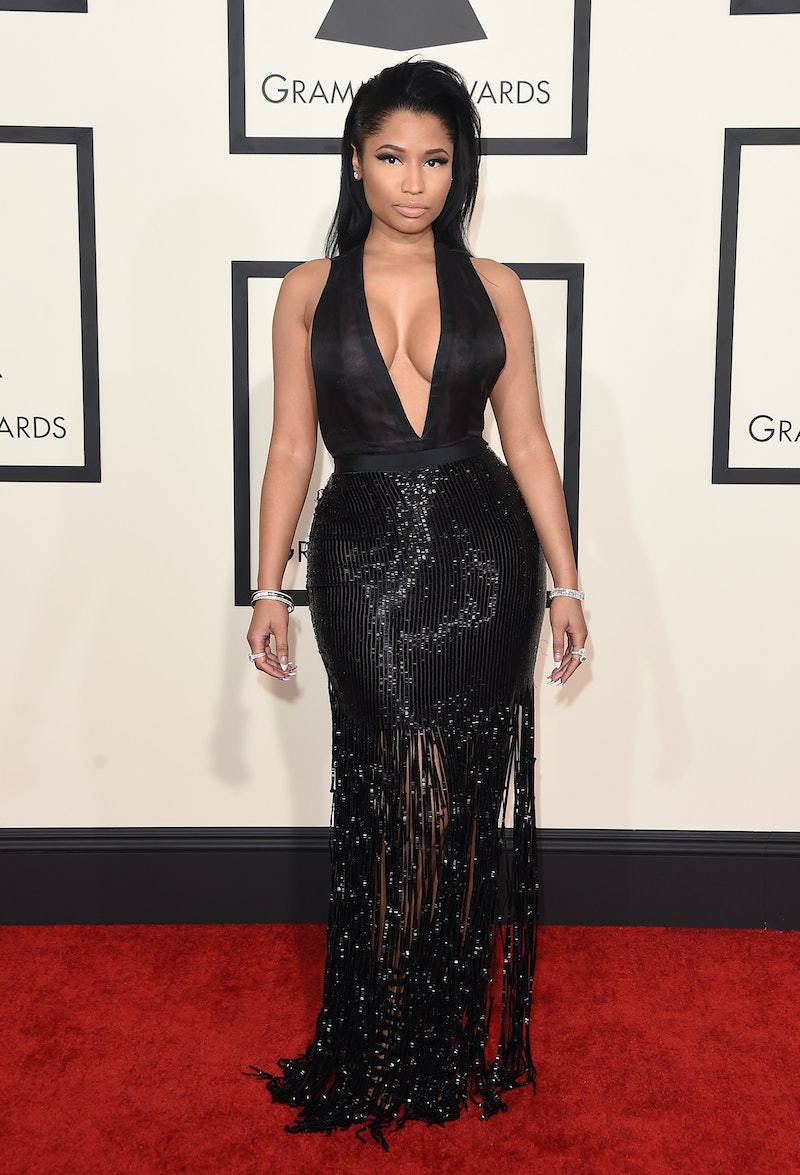 Waiting for Nicki Minaj at the 2016 Grammys was like waiting for an angel (the flyest angel in all of heaven) to descend upon my world to show me how to live my life. Sadly, this year, she was nowhere to be found, so we're left to imagine what she would have worn instead of being able to see it for ourselves.

It wouldn't have been her first awards showstopper – far from it, actually. Last year, she showed up at the 2015 Grammys wearing a fiercely low cut black gown with sequined fringing, and she worked every single second of that red carpet like she'd been doing it from the day she was born. Then, at the 2015 MTV Video Music Awards, she wore a gilded Labourjoisie gown that probably made your heart skip a beat or two – and that was before she made you lose your mind when she called out Miley Cyrus.

Needles to say, this woman is skilled at making the night a little bit more interesting, and she certainly would have brought her best this year. Though she won't be performing (sob), and The Pinkprint wasn't nominated for Album of the Year (scream sob), "Truffle Butter' was nominated for Best Rap Performance, "Only" got a nomination for Best Rap/Sung Collaboration, and The Pinkprint did snag a spot in the "Best Rap Album" category – even though the nod went to Kendrick Lamar. Only time will tell if she'll take any of the other titles, but until then, at least we can sing the praises of her former red carpet looks.

And here are some of her best looks from red carpets past.

Minaj served us fringed biker realness at last year's awards, and I loved every second of it.

This golden gown with sheer panels is amazing, and paired with a blunt bang, Minaj was definitely giving us a modern Cleopatra situation.

This dramatic red cape wasn't everyone's favorite, but it definitely spoke to me – even if I wasn't sure exactly what it was saying.

This look was definitely a testament to the fact that Minaj doesn't take herself so seriously all the time.

She had Meek Mill by her side, and she totally slayed in this intricate Givenchy lace gown.

This cutout Alexander Wang frock was one of my favorite Minaj looks ever. It was totally wearable, but still gave a subtle nod to the star's unique style.

This scandalous Alexander McQueen gown is absolutely perfect, and it's one of those looks that gets better with time.

As you can see, we really missed out on some red carpet amazingness due to Minaj's absence. Hopefully next year she'll come back to us in full force.