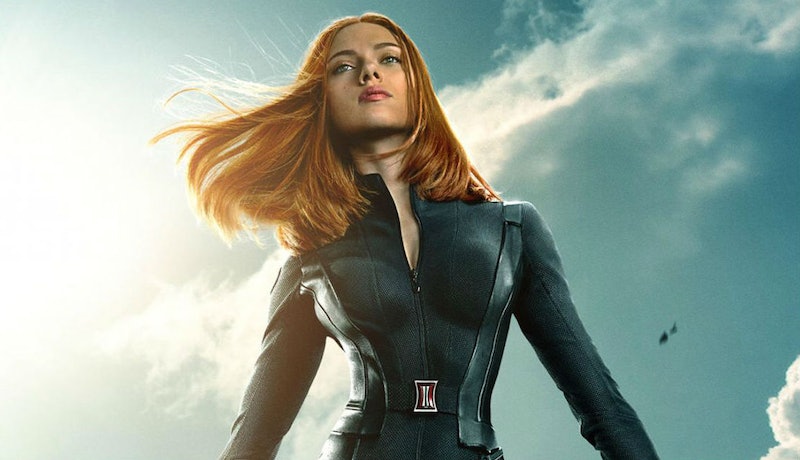 It would seem Scarlett Johansson can't escape controversy this week. First, she's the subject of criticism over her support of SodaStream and now, it's her Captain America 2: The Winter Soldier poster that's sparking debate. The problem with the Cap 2 conversation is that it's focusing on whether or not Johansson's waistline was Photoshopped — it's a movie poster, so I'm going to go with "duh" — when there's another issue at work.

Look, I'm not saying Photoshopping an already unattainably beautiful actress to look more like a Barbie than humanly possible isn't shitty. It's shitty and it certainly doesn't make anyone feel good. But show me a movie poster in the last 15 years that wasn't photoshopped; movie posters are ads. There will be Photoshop. It's what the Cap 2 poster does after the issue of image-altering is settled that's bothersome.

Despite the fact that Johansson's character Black Widow is a superhero and a member of the Avengers, her poster is wildly sexualized. Rather than striking a pose of strength — something even ol' Eyepatch McGee (fine, Nick Fury) gets to enjoy in his poster appearances — Black Widow appears softened and coy, almost blowing in the wind along with her hair.

She's almost wistful, holding the guns only to prove she's still the action hero character she's supposed to be. But with her head titled slightly and her knee popped so she can strike a flirtatious pose while listlessly holding her two weapons at her sides, she appears more like a walking come hither stare than a superhero. She could take down an army with her tactical skills, but you'd never know that because on this poster, it appears she's trying to hypnotize audiences with her hips.

The issues with this image would be no big surprise if it hadn't been for better representations of women action heroes that came before it — namely, Black Widow on her character poster for The Avengers (below). She's not even slightly flirtatious. She's furious and determined; her hips are facing straight forward; her stance and countenance suggesting power over sex appeal. Her face is the focus, rather than her body — though she's Scarlett freaking Johansson, so her body still looks incredible. This poster was sexy without being sexualized.

We get it. Dudes love Marvel movies, and dudes probably really get a kick out of Johansson's very sexy Cap 2 poster, but there's this thing called Women Like Superheroes Too. And while Black Widow isn't exactly our savior, she is a kickass woman we can get behind. We're smart enough to know that she isn't just standing around striking sexy poses and letting her hair blow in the wind throughout Cap 2, but is it so much to ask that the image that will likely adorn whatever 50 foot tall poster winds up in Times Square might have a lady superhero who looks like she just rocks instead of looking like she's about to rock someone's world?