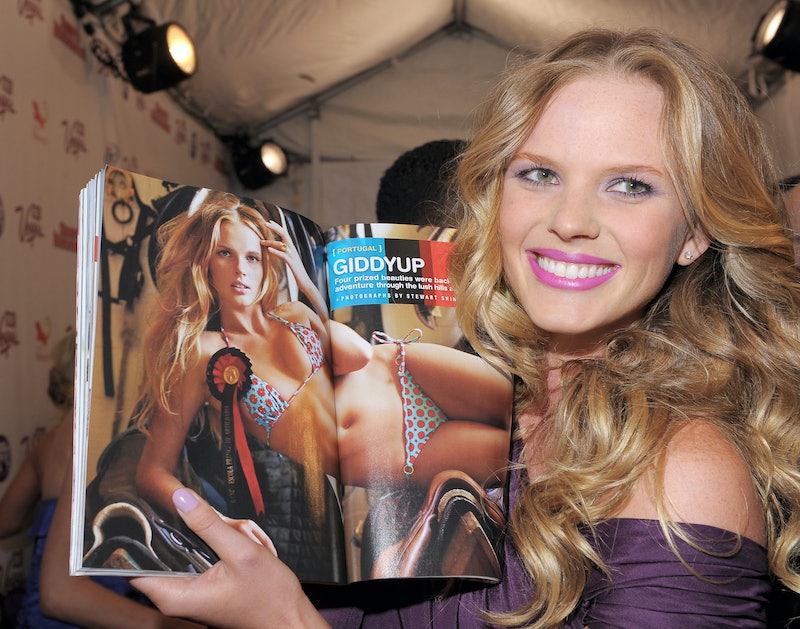 Models are models for a reason: They've all hit some sort of very rare biological jackpot. And although not all models are conventionally beautiful, they do have one thing in common (other than dating Leonardo DiCaprio): they're all pretty damn striking. Anne V is no different. Blonde, ethereal, and just about every ice-princess-worthy adjective, Russian model Anne Vyalitsyna has posed for the Sports Illustrated Swimsuit Edition for nine years in a row. Nine.

Even though Vyalitsyna has appeared bikini-clad in SI more times than I have actually felt comfortable enough to wear a bikini in my life, the model recently revealed that she had insecurities, too. Anne V described to Vogue how hard it was to grow up in the fashion industry — a business that is hyper-critical of everyone, including (maybe even especially) models. Now, at 27, Anne V said she has learned how to deal with it:

I've been modeling for 12 years and I can do it with my eyes closed. I know I'm pretty.

And there it is. While every woman seems to find a strange sort of pleasure in reading the "they're just like us" stories of models and celebrities in which stars famous for their beauty describe their and self-doubt, the second someone like Anne V says something as bold as "I know I'm pretty," a sort of unsettling, critical feeling takes over.

Women don't like to hear other women say, "I know I'm beautiful." It sounds silly, but it's a hard and sad truth. For some reason, we have created an unspoken rule that saying and believing you are beautiful negates the truth of it. Instead, the idea of not being aware of our own beauty is celebrated.

"You don't know you're beautiful/And that's what makes you beautiful," sang Harry Styles and the rest of One Direction in their insanely popular and absolutely inescapable hit single. Of course, One Direction is a boy band catering mostly towards teen girls and not necessarily adult women, but maybe that's the problem.

Here are hoards of young girls (also me, alone in my apartment) singing a song naming a girl's insecurities as what makes her attractive. While there is, of course, something to be said for any woman who isn't fixated on her looks, that really isn't what the song says. "What Makes You Beautiful" emphasizes a larger and scarier, yet incredibly socially-accepted idea, that a confident, self-assured woman who knows she's beautiful is somehow less attractive.

Sounds insane, yes? And it is.

Women must be honed in on unspoken yet pervasive ideas surrounding confidence and beauty. We need to encourage each other to be confident in our own beauty, rather than being ashamed to feel good about ourselves or acknowledge that we find ourselves pretty. And when a woman says she's attractive, rather than texting your girlfriends about how she's full of herself, we must take the impetus to recognize that her action is a beautiful thing in itself.

Even though most of us aren't Anne V and won't be walking a catwalk any time soon, at the end of the day, her statement of "I know I'm pretty" is a simple, yet important message for all woman.

More like this
Here Are All 703 Outfits Rachel Wore On Friends
By Kat George
Florence Pugh’s Flipped Bob Is Giving ’60s Bombshell
By Olivia Rose Ferreiro
Selena Gomez’s Rainbow Nails Added A Perfect Pop To An All-Black ’Fit
By Audrey Noble
How To Get Wednesday's "Soft Goth" Lip, Straight From The Makeup Designer
By Audrey Noble
Get Even More From Bustle — Sign Up For The Newsletter