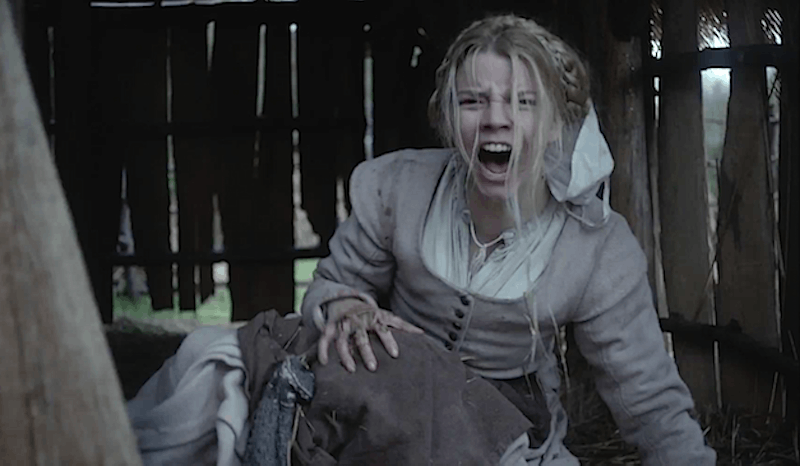 Back in the '90s, witches became metaphors for women's empowerment in movies like The Craft and Practical Magic, as well as teen dramas like Charmed. Pop culture’s most famous witch of all, Hermione Granger, used her intelligence and power to defeat evil in the Harry Potter series; Disney witches, meanwhile, once seen only as sources of horror, explored more complex aspects of their power in films like The Little Mermaid. These women changed from their nightmarish beginnings seen earlier in history to more interesting and complicated people, becoming a little less terrifying and a lot more cool. But with a new movie, witches — and all of the fear, paranoia, and terror that come with them — are going back to their 17th century roots in Robert Eggers’ chilling historical horror film, The Witch.

“Witches have become Disneyfied, plastic ornaments that you hang outside of your door and little kids dress up as for Halloween,” Anya Taylor-Joy, the movie's star, tells Bustle. “Or like in The Craft, as an epic source of female empowerment. But I'd argue that even the witches in The Craft are scary. They f*ck shit up.”

The Witch, out Feb. 19, takes what viewers think they know of witches, with decades of sanitization, and turns these women back into powerful, frightening beings. Says Taylor-Joy, “It’s like, oh you think that's a witch. Here's a witch.”

Following the story of a Puritan family in 1630s New England who are banished from their village and choose to live in a remote area by a sinister forest, The Witch is an original, fascinating take on a centuries-old subject. When baby Samuel goes missing, right under teenage daughter Thomasin's watch, the family begins to suspect the young woman of witchcraft. And as more and more horrific and sinister things occur in these edge of the woods, Thomasin becomes increasingly accused — yet she asserts her innocence throughout.

The film's focus on the power of suggestion and the horrible consequences that can have, Taylor-Joy says, was evident the first time she read the script — which was, rather fittingly, very late at night, home alone in her bed. “I turned the final page and my body collapsed into itself. I was seized by the most fearful anxiety that I just didn't understand,” the actor recalls. The Witch's portrayal of religion, as well, stuck out to her; Taylor-Joy, who was brought up Catholic, says the script contained "several lines that just felt like they'd gone through my heart with a stake."

"It's an ancestral, inherited fear that is so embedded, deeply in my body that I wasn't even aware that it existed," she says. "It's primal and animalistic and tapping into something that people have forgotten. Realizing it again it shook me big time."

The Witch is indeed hauntingly creepy, and it's already being hailed as one of the most successful and critically praised horror films in years. Perhaps its popularity stems from its abandonment of jump and scare tactics in favor of a slow-burning, realistic tale of horror, with roots in a true, terrifying time of American history. For Taylor-Joy, the movie's basis in reality hit her hard once on set. “In the moment, when Thomasin is accused of being a witch, an intense feeling of dread came over my body,” she says. “That is it. That is a death sentence, and this happened to women. This happened.”

Yet for the actor, getting to play a witch, even one so persecuted, was clearly a thrill. “I've been deeply into magic for a very long time. I love witches,” she says with enthusiasm. “When I was little I would run into the woods to look for them, very excited and very certain that there would be magic and I will be a part of it."

The only true magic from The Witch is its impressive ability to terrify, thanks to its pitch-perfect balancing of the supernatural and the historical. After all, what’s scarier? The idea that witches exist, with the ability to harm and kill using the powers of the Devil? Or that you may be accused of being a witch yourself and possibly killed for it, thanks to widespread paranoia and groupthink mentality? The Witch combines both horrific possibilities — and it does so by giving agency to its lead character, even as she's persecuted for something she swears she didn't do. Says Taylor-Joy, “It's nice to bring that kind of power back to the word 'witch.'”

Even if it means terrifying viewers as a result.

More like this
Twitter Is Identifying With Sally Field & Jane Fonda’s Friendship In New Viral Video
By Jake Viswanath
North West Will Make Her Acting Debut Alongside Mom Kim Kardashian
By Radhika Menon
How To Stream 'To Leslie'
By Radhika Menon
Keke Palmer Shares The Sex Of Her & Darius Jackson's Baby
By Jake Viswanath
Get Even More From Bustle — Sign Up For The Newsletter
From hair trends to relationship advice, our daily newsletter has everything you need to sound like a person who’s on TikTok, even if you aren’t.