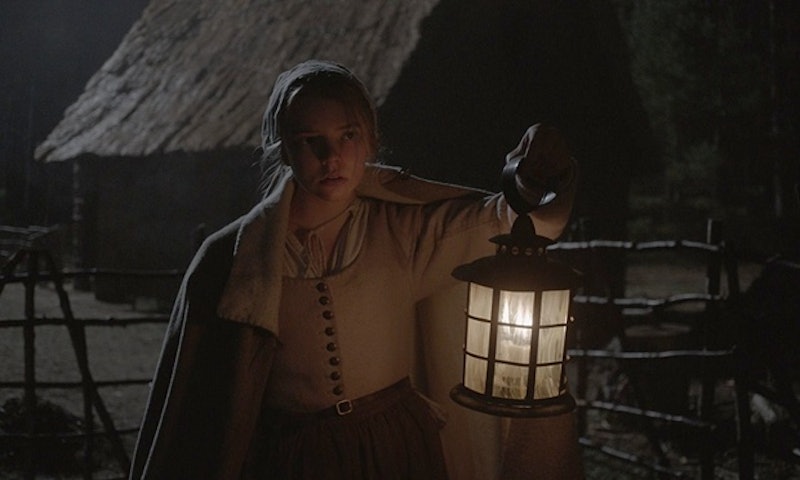 A new horror movie called The Witch is set to try and frighten audiences on February 19, bringing back a classic scary movie mainstay that hasn't been all that successful in recent years: Witches. The once-terrifying devil-pact-makers that gave audiences the creeps in movies like 1999's The Blair Witch Project and 1968's Rosemary's Baby have in recent years been relegated to creatures to be hunted in bland action flicks like 2013's Hansel & Gretel: Witch Hunters and last year's The Last Witch Hunter. But The Witch is hoping that it can put witches back at the forefront of horror movie antagonists. So how scary is The Witch going to be?

The word on the street is that this movie is scary with a capital S. The movie so far sports an impressive 85 percent rating on Rotten Tomatoes, and the bulk of reviewers are praising the film for its disturbing level of creepiness. "The subtitle of [writer/director] Robert Eggers’ intense and unnerving feature debut The Witch is A New-England Folktale, and once you’ve seen the movie, you’ll think even ye olde unnecessary hyphen is scary," Time writes in their review. The Wrap refers to the film as a "genuinely creepy horror triumph." And Mashable says the movie is "a truly dark, stunningly crafted experience that'll have you seeking out a church as soon as you leave the theater." This all sounds terrifying, but what is about about The Witch that has everyone running scared? Take a look at these nine reasons why The Witch is so scary.

The Witch takes place in 1630 New England, as a family is exiled from their community and forced to try to survive on the edge of wilderness. As someone who grew up myself deep in the woods of Maine (no foolin'), I can confirm that it's a weird, creepy place even today. I can't imagine growing up there without the modern distractions of lights and television.

In the film's trailer, a baby goes missing during a game of peek-a-boo. Is this not every parents worst nightmare? That your baby just disappears without a trace? I don't have kids, and I find this concept terrifying.

Every horror film worth its salt these days has a creepy kid or two, and The Witch is no exception, having two of the youngest members of its family seemingly communicate with their goat, Black Phillip.

I've never been more scared of a farm animal. There's just something unsettling about Black Phillip; like he knows something I don't.

At the heart of the film is the story of a family turning against each other. The idea of not being able to trust your family, especially when there aren't any other people around for you to associate with, is extremely unpleasant.

The family's hardcore Puritan religious beliefs dictate every aspect of their lives, making their already challenging lifestyle almost impossible to maintain with their self-imposed restrictions and superstitions. Not an easy way to make a living.

In my opinion (and many others), The Exorcist is the scariest movie of all time. So any time a film includes Satanic dealings and makes them seem real, I can assume I'm in for a real scarefest.

The film takes place a few decades before the Salem Witch Trials, but it's hard not to think of that black eye on our history, and the paranoia that once gripped the region.

This movie would be plenty scary without anything supernatural going on, but the fact that there's a real, super frightening witch who messes with baby's blood is just too much.

The Witch looks as if it's going to be one of the most frightening films to be released in years, as it's bringing Americans' fears of the past into the present in a unique and refreshing way. After watching it, I think I may take a nice long break from planning any trips home to Maine for a while.