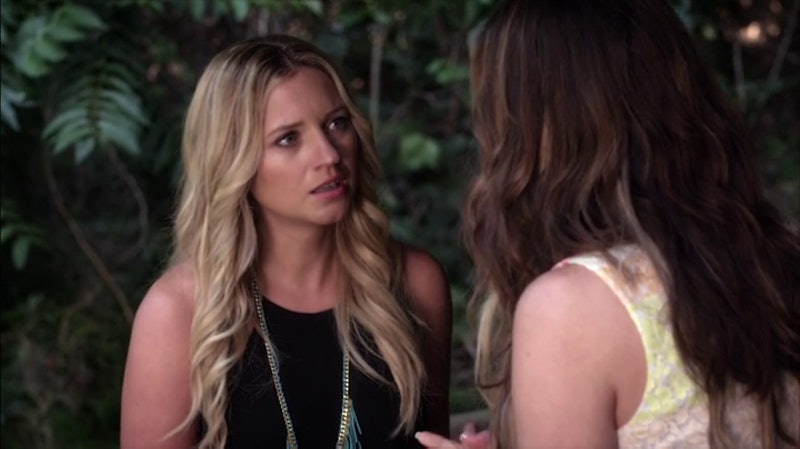 Five years have passed since Charlotte DiLaurentis was revealed as Big A, but though Charlotte was once the Liars' greatest adversary, today it's her death that is bringing them the most trouble. Charlotte was killed in the Season 6B premiere, and, because this is Rosewood, the Liars are once again suspected of murder. Emily, Aria, Spencer, and Hanna have lived five A-free years, but now it seems that another omnipresent stalker is gearing up to take them down. Though the girls have not been contacted by Uber A just yet, showrunner I. Marlene King insists that Uber A — and "what we've been waiting for" — is coming. The flash-forward at the end of Season 6A seems to confirm this, as the Liars confront Ali about a "he" who is coming for her. We know that this Uber A is seriously dangerous, but while most of us assumed that Uber A is the one who killed Charlotte, there could be a completely different connection between these two characters. Could Uber A blame the girls' for Charlotte's death?

So far it's safe to assume that the Liars did not kill Charlotte (that would be a huge betrayal to loyal PLL fans, let's be real) but clearly someone they know did. At the end of "Charlotte's Web," we saw a mysterious, seemingly male figure visit Charlotte's grave. That person's driver said that he was sorry for their loss, which might mean that the person visiting Charlotte was a friend of Ali's older sister — not a foe.

King's interview with MTV suggests that Uber A is targeting the girls because he believes that they may have had something to do with a death. Here's what she said:

This Big Bad has an agenda, and it’s to find out why this person passes away — and to seek revenge on the person responsible...and it will not stop until that person pays, and [the Big Bad] will kill people to get that answer.

Considering that Charlotte is the season's first dead body, and that a potential Uber A was visiting her grave, it seems like the person King is referring to is Charlotte. If that is the case, there are a few possibilities as to who this new Big Bad — a.k.a. Uber A — could be. Perhaps Uber A is a friend of Charlotte's from the mental hospital who got out before Charlotte was able to. Perhaps he is a friend that Charlotte knew from Radley, or even a friend that she met as "Cece Drake" when she went to UPenn. Whoever this person is, Charlotte likely told them about how awful the Liars were, which put the girls on his hit list.

If Uber A is a friend of Charlotte's and not her murderer, that means that we have two dangerous people at large in Rosewood. Buckle up, PLL fans: the mystery train isn't slowing down anytime soon.