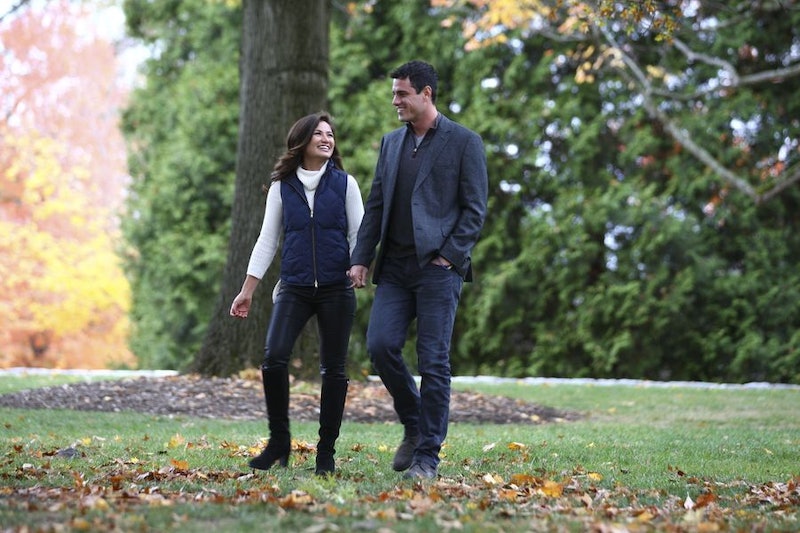 This season of The Bachelor is trucking along as Ben continues on his search for the love of his life and leaves the occasional broken heart his wake. Now that we're down to the final four, it's time for hometowns! But I'm looking ahead even father to the end of the season, and who will be standing in front of Ben when the Bachelor gets down on one knee. So, does Ben choose Caila on The Bachelor Season 20?

Of course, who can forget when Ben affectionately referred to Caila as a "sex panther," or that he's taken her on two one-on-one dates? But, even though Caila seemed to be an early front-runner — or should I call her a front-jumper given her limo introduction? — I just don't think it's in the cards for these two. After filming wrapped, Ben has kept pretty mum on the exact details of this season of The Bachelor, keeping us in the dark about who he chose at the end of this process. However, that isn't to say there haven't been clues along the way throughout the season. So I'm going to lay out exactly why I don't believe Ben will choose Caila at the end.

Sure, Ben choosing to take Caila on a second solo date could totally be a good thing. But when Ben was explaining his reasoning to the cameras, he said he made the decision because he still wasn't sure about Caila. He wanted to break through Caila's happy/always smiling exterior, which implies that he didn't feel as though he knew the real Caila. At this point in the season, that is a gigantic red flag.

During the dinner portion of their second one-on-one, Caila and Ben had a confusing conversation in which she told him she's worried she'll break his heart, which makes him worried she's already checking out of their relationship. Was this a hint of things to come? I think it was, and I think what's to come is heartbreak.

During the group date while the contestants were in Ben's hometown of Warsaw, Indiana, Caila approached him with her worries that they had very different upbringings — he had roots in one town while she moved often. It didn't seem to be a problem for Ben, so long as she could see herself staying in one place. But, this sounds like it could turn into more of a fundamental issue in their relationship down the line. (Plus, that whole moss speech doesn't really count as an answer in my book.)

Caila Is Unsure Of Their Relationship

During the rose ceremony of Episode 7, Caila said she had a bad feeling. Although Ben inevitably sent Becca home, it seemed clear he was deciding between Becca and Caila — and it seems even Caila knew their relationship wasn't as solid as it could be by that point in the season. If both Caila and Ben are unsure of their connection, that doesn't bode well for the two.

Ben and Caila's relationship would be shaky even in the real world where Ben wouldn't be dating three other girls in addition to Caila. But, this is The Bachelor, so we need to take the other relationships into account and, unfortunately, Ben's connections with some of the other ladies are much stronger than the one between him and Caila.

Maybe I'm being too much of a Negative Nancy — or maying I'm reading just a little too much into all of Ben and Caila's interactions — but I don't see these two working things out and ending up together. But, on the bright side, that leaves Caila as a perfect candidate for The Bachelorette !