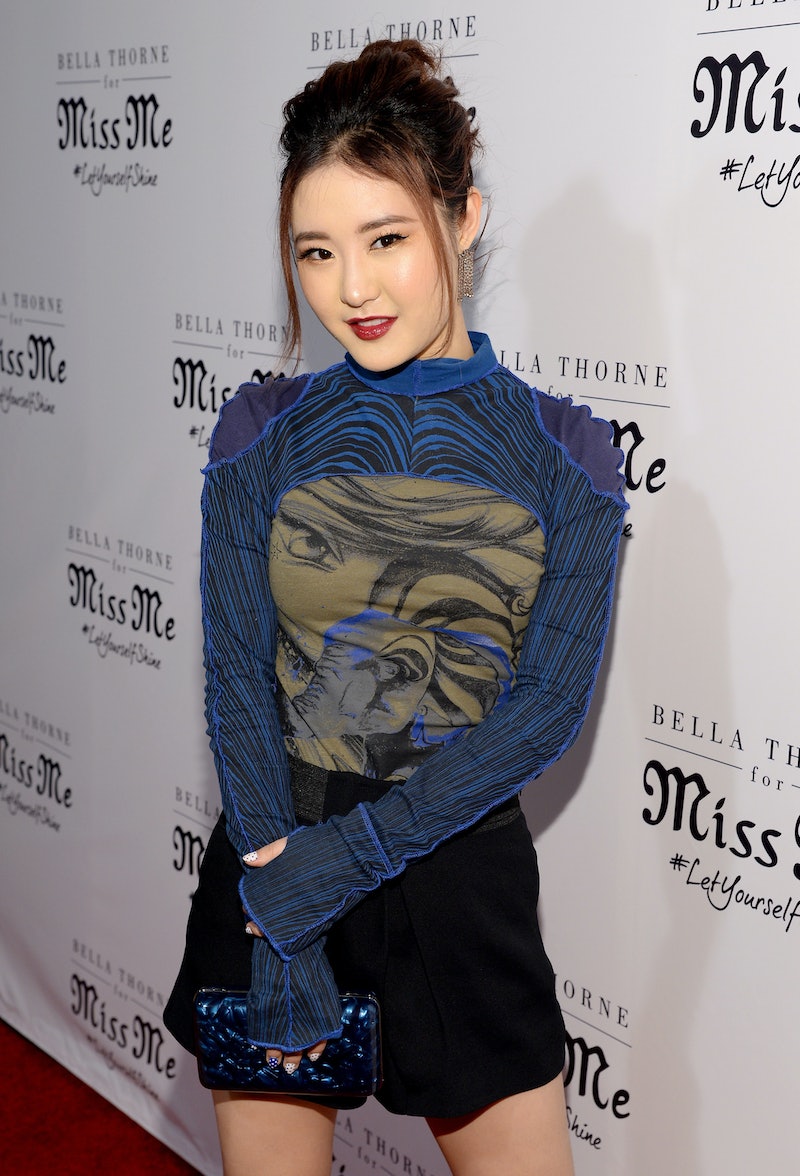 Megan Lee is kind of a big deal, and, in 2016, she's going to become an even bigger one. The Korean-American actress is probably best known to her American fan base as Sun Hi Song from the Nickelodeon series Make It Pop , but, as a singer, she's done many YouTube videos of original songs and covers on her own channel, and, as a songwriter, she has a career that she built solidly in Korea and that she is about to bring back to an American audience as well with an album to be released at some point in 2016. However, even more inspiring than how hard she has worked to build her brand and reach an audience is exactly what kind of message Megan Lee aspires to send to said audience via said brand. "I like to use music to inspire and empower people in a positive way," she says in an interview with Bustle. "That’s sort of the message.”

In the last year starring as Sun Hi Song in Make It Pop — a whirlwind experience that Lee describes as happening very quickly — Lee has embodied the outspoken, fiercely loyal, and fiercely independent character by putting some of her own soul into Sun Hi. "It’s more like an enhanced version of myself when I play Sun Hi," she says. "Everything is just over the top. I love to know people, I love to sing, I love to perform, and I like to make people happy. So I guess I try to use those characteristics of myself into Sun Hi’s character."

Nowhere is the connection between the character and the woman more obvious than when it comes to Lee's music career. Her music draws from her own personal experiences in order to craft songs that people can relate to, learn from, and feel inspired by. In fact, that, Lee believes, is the entire point of being a musician. “I believe that’s what entertainment is really about in my heart. I think, especially in the music world, music is a very powerful thing and I want to use it in the most positive way possible. To inspire other people. To spread a good message. To make the world a better place. I know that sounds really corny and cheesy!" She laughs. "But that’s how music has touched my heart, so I want to be able to touch other people’s hearts in the same way and hopefully even more.”

Quite honestly, she seems to be pulling that off. Lee frequently connects with her fan base, partially made up of the #SunHiNation of fans she has picked up from her work on Make It Pop, through the use of her videos, her Twitter account, her Instagram, and her Vine. There are some celebrities who seem completely inaccessible — unless you have the money to pay to see them, of course — but Lee is not one of those people. She not only goes out of her way to be accessible to her fans, but she also cites them as just as much of an inspiration to them as they might be to her.

“The fans are the reason I keep doing what I do now. They inspire me," she says. "Especially on the days when I’m down. You know, we’re human, we have our ups and downs. But I think the fans are definitely the ones who push me through my career and they inspire me to keep going forward and not give up.” She praises her fans for their funny pictures and drawings of the Make It Pop cast, for creating videos in which they sing and dance along to songs from the show or that Lee herself has written as a solo artist, and for making hilarious memes and captions for Make It Pop. Above all, she praises her fans for being there for her, with the kind of humble appreciation that is truly rare to find in a celebrity with such talent.

Fans looking for more of Lee won't have long to wait. The singer-songwriter has been working on an album called I Am... that will be released in March 2016, or at least before December 2016. But this is not an album that is just for fans. This is an album for anyone who is curious about what it is that Megan Lee truly is and what it is that Megan Lee is truly all about. "The song titles are still not confirmed, so I can’t really say much about it, but each of the songs will be somewhat filling that sentence: I am... blank and blank." says Lee. "I want this album to show a new side of me to my fans as a musician, as a person, because I’ve learned so many things over the past few years. I think I’ve grown a lot and changed as a person, hopefully in a positive way! So I want to kind of express myself through my new music."

The album, which will be a mixture of jazz and urban and many "different things" besides, is still a work in progress, but it's the exciting kind of work in progress. Rather than feeling overwhelmed or terrified by the prospect of releasing music in English for the first time in a long time, Lee absolutely can't wait. "What I look forward to the most is how [the fans] relate to the songs, because a lot of these songs that I’m writing come from personal experiences. Some of them can be pretty emotional, but I want a lot of them to be happy and positive. I’m really looking forward to see the reactions from the public, the general audience and the fans." Honestly, just looking through Lee's YouTube page is enough to convince even the most stubborn detractor that her talent is undeniable. Whatever musical message she wants to send to the world is sure to be inspirational, empowering, and relatable in a way that only Megan Lee can be.

More like this
Is Megan Fox Pregnant? MGK Gave A Shout-Out To Their “Unborn Child” Onstage
By Hugh McIntyre
Harry Styles Performed A Snippet Of Taylor Swift’s “22” & The Crowd Went Wild
By Jake Viswanath
BTS Is Visiting The White House To Discuss Anti-Asian Hate Crimes With President Joe Biden
By Jake Viswanath
Kim Kardashian Reacts To Kanye West’s Diss Song “Eazy” On 'The Kardashians'
By Jake Viswanath
Get Even More From Bustle — Sign Up For The Newsletter