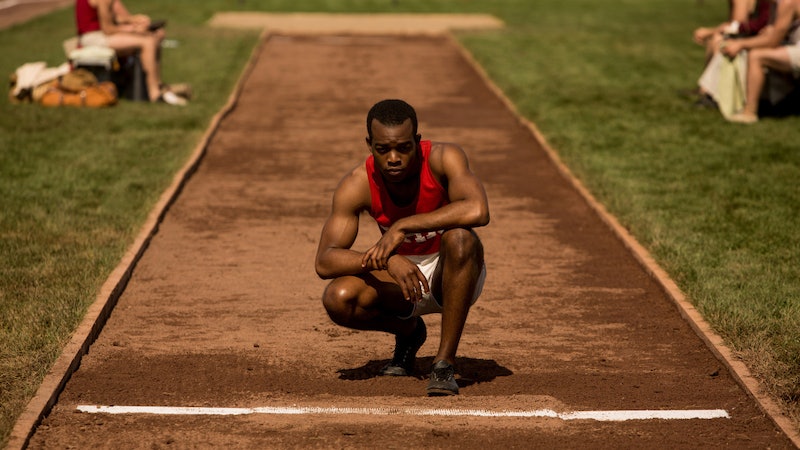 The new Jesse Owens biopic Race tells the story of the star athlete's rise in the sport of Track & Field from his college days at Ohio State University through his record-breaking performance at the 1936 Olympic Games in Berlin. During Hitler’s Nazi regime, it was not only groundbreaking that Owens, as well as other black and Jewish athletes, even attended the games, but that he went on to win four gold medals, showing up some of Germany’s most prized competitors and embarrassing a nation that would most likely have preferred he hadn’t shown up in the first place. Yet one of the most interesting aspects of the movie has little to do with Owens himself, but a supporting character: Leni Riefenstahl, Hitler’s go-to film propagandist and the person who documented Owens' career-making runs for the world to see.

Played by Game of Thrones’ Carice Van Houten, Riefenstahl is an assertive, important character, with her presence filling the void in what would otherwise be a heavily male-dominated film. But her inclusion in the story doesn't come without some controversy. Although Race paints Riefenstahl squarely as a hero, she actually has a far more complicated legacy — and considering that the film is essentially about how someone who's oppressed triumphs over adversity and discrimination, it’s rather odd that Race mostly ignores the criticism that's surrounded Riefenstahl and her films in regards to her possible Nazi connections.

Riefenstahl’s work is something that every cinephile should be familiar with; after spending the 1920s as an actor, she was asked by Adolf Hitler to direct Der Sieg des Glaubens (The Victory of Faith), a documentary about the 1933 Nuremberg Nazi Party Rally. That film would inspire her crowning achievement, Triumph of the Will, which documented the same rally the following year. Triumph of the Will has been called one of the greatest propaganda films of all time by many cinematic historians, and it took Riefenstahl’s career to a higher level than ever before. Said The New York Times critic at the time, the film’s “cheering crowds, precision marching, military bands, and Hitler's climactic speech, all orchestrated, choreographed and illuminated on a scale that makes Griffith and DeMille look like poverty-row directors."

After the success of Triumph of the Will, Riefenstahl was asked to document the 1936 Olympic Games, to which she would have full access, with no restrictions. It was through this technical masterpiece, Olympia, that she helped pioneer a number of filming techniques, including mounting a movable camera on rails for tracking shots and using slow motion. Because of Olympia, Owens’ record-breaking runs and flying jumps were captured on film for the world to see. And, notably, despite potential backlash (which in the case of Nazi Germany could possibly mean outright death), Riefenstahl chose to treat Owens, and any other athletes at the Berlin Games, with the same cinematic reverence that she reserved for the Fuhrer himself.

There are moments throughout Race when Riefenstahl is shown acting in defiance of Hitler’s regime, particularly when she and her team are ordered not to film the Games' final relay, the race that would earn Owens his fourth medal. Instead of complying, Riefenstahl leads her crew back into the stadium, challenging Propaganda Minister Joseph Goebbels’ commands in order to capture Owens' historic win. The scene supports the idea that the filmmaker was never actually a Nazi, but simply a person interested in recording history and creating beautiful movies. And Riefenstahl's presence in Race is undeniably inspiring. It’s thrilling to watch her capture the motions of the athletes, and witnessing such a groundbreaking female filmmaker in action, especially one from the 1930s, is something audiences rarely get to see in real life, let alone on-screen.

But by making Riefenstahl a heroic character, Race ignores the darker sides of her legacy, such as her involvement in Nazi propaganda and following of Hitler's commands. There's no strict evidence that she was a Nazi herself; after World War II, Riefenstahl attempted to distance herself from her Nazi employers, claiming that her duty was only ever to the craft and not necessarily to the ideals of those that commissioned their making. According to The Guardian , “She always insisted that she had never been a member of the Nazi party and knew nothing of Hitler's plans to wipe out the Jews. She also denied that she had had an affair with Hitler, but admitted that she had once gone for a romantic walk with him by the sea.”

There is, of course, always the possibility that Riefenstahl was a victim, adhering to Hitler’s requirements out of fear for her own life. The Guardian reports that about a year before her death in 2003, she said, "I had no political reasons for making these films. There was one Hitler and one government. Everyone shouted: 'Heil Hitler'. It was normal at that time. You have to put yourself in the past to look at it from the right perspective."

Certainly one of the greatest conflicts in artistic appreciation is the question of if consumers should separate the intentions of an artist from the art itself. Riefenstahl may go down in history as one of the greatest filmmakers to ever live, but her life will always be shrouded in the mystery of her Nazi associations. As film journalist Sandra Smith recalled in The Guardian , The Independent once wrote that "Opinions will be divided between those who see her as a young, talented and ambitious woman caught up in the tide of events which she did not fully understand, and those who believe her to be a cold and opportunist propagandist and a Nazi by association."

And while Race choosing to plant Riefenstahl firmly on the side of progressive good might be frustrating to some, the reasoning makes sense, considering the movie's focus on Owens and the fact that it's already full of conflict without delving into Riefenstahl's motivations. Still, it's a bit disappointing that, like many other films have done, Race casts aside what could've been a substantial female-led subplot in order to focus on its male hero. So perhaps it’s time for a Leni Riefenstahl biopic, a (hopefully female-directed) movie that focuses on the filmmaker in all of her controversial, naive, powerful, problematic glory. I, for one, think that exploring such an intriguing figure would make for a great, thought-provoking historical drama.