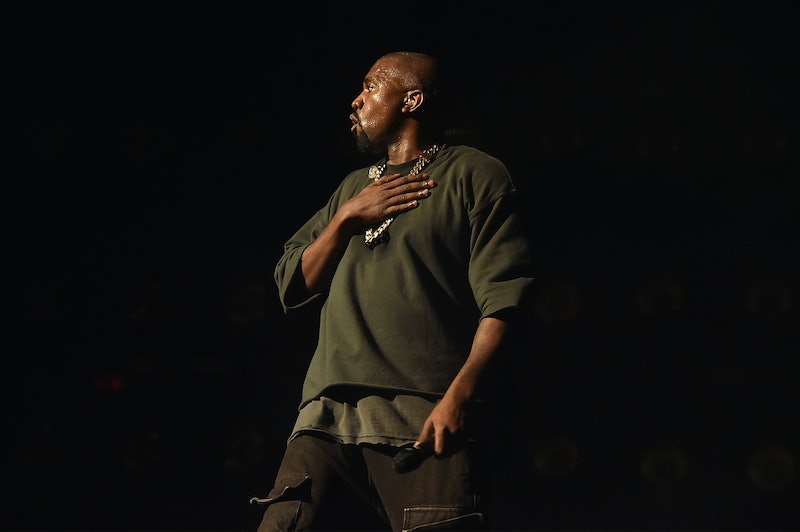 To say that Kanye West is no stranger to controversy would be like saying that his wife Kim Kardashian is no stranger to the selfie. After releasing his new album The Life Of Pablo on TIDAL, West has gone on series of rants on his Twitter, about topics ranging from his music to the state of education in the United States. Apparently, though, there may have been another rant that took place offline: according to Page Six, West allegedly had a "meltdown" on the set of Saturday Night Live Feb. 13 — and now, it seems there might be potential audio of the alleged SNL incident.

Page Six leaked they claim to be audio of West backstage at SNL on Feb. 13, where he was performing to promote The Life Of Pablo. The audio, whether it truly depicts West ranting or not, is definitely an intense listen. According to Page Six, the alleged rant was sparked by the fact that SNL reportedly had to strip West's stage of a shiny flooring material, which allegedly infuriated the "Ultra Light Beam" rapper. Eventually, though, the alleged West rant then gets into West's favorite topic (how awesome he is) and a number of other topics West has been fond of ranting about lately — including Paul the Apostle, and Taylor Swift.

"Look at that sh*t, they took my f**kin stage offa SNL without asking me. Now I'm bummed," the audio alleges West ranted. "That and Taylor Swift, fake a**. Now I ain't gonna do this, we're breaking the mother f**king internet." Then: "By 50 percent! Stanley Kubrick, Apostle Paul, Picasso, f**king Picasso and Escobar. By 50 percent more influential than any other human being. Don't f**k with me!"

The clip ends with the voice yelling, "By 50 percent for the next thousand years. Stanley Kubrick. Ye."

It should be noted that we do not have confirmation whether this is really West on the tape or not. Bustle reached out to West's team for comment in response to Page Six's audio and claims, but has not yet received a response.