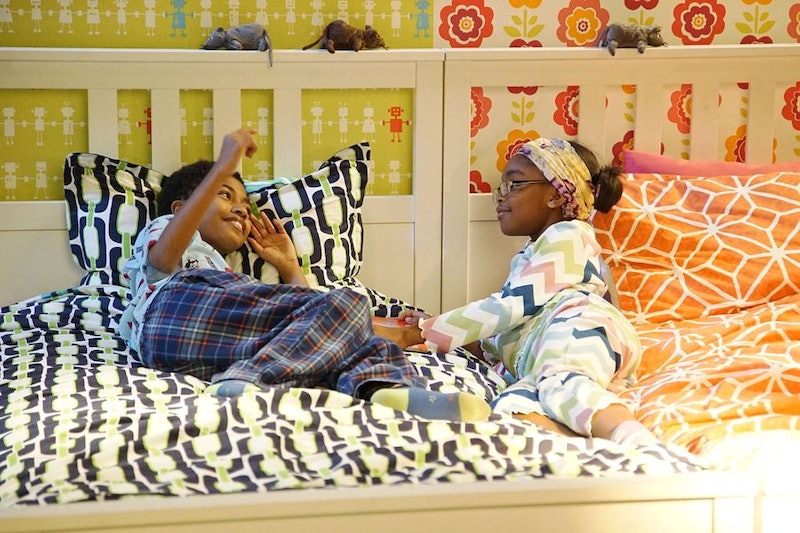 Seeing Jack & Diane dressed identically is pretty much the extent of their participation in black-ish so far, so it's a shame to see their first full on episode ruined by wasting half of the episode on extended product placement. The idea of Jack & Diane not wanting to be twins on black-ish anymore is something that any siblings can relate to. But, receiving a Buick as a gift? Not quite as relatable. In the episode, Dre unfairly limits Zoe after gifting her a brand new car. Unfortunately, it seemed to directly contrast Zoe's character — she's supposed to be the normal teen in this family, who would totally use her own car to party and stay out late, not head to the library.

As the most comedically focused episode of black-ish Season 2 post-holiday hiatus, I'm not displeased about the episode's lack of a larger theme or more serious message besides a fun 30 minute adventure with the Johnson family. And despite the disappointment that the Zoe plot retread old ground, there were plenty of funny moments. Junior attempting to turn his room into the world's most night terror-fying Air BnB of all time was fantastic. "Name one thing that sounds sexy... about condoms" was a perfectly constructed joke. And it's always a joy to see Tracee Ellis Ross act like she knows what she's doing while Bow is completely clueless.

Of course, the tables finally turn on Diane, who's more of a shy nerd than a popular kid without Jack. And, while that's basically a foregone conclusion, given that they couldn't very well un-become twins, doing it through the visual of Jack routinely finding nails in his sandwich is right for such a lovable dummy. So, it's a shame that ultimately, the episode winds up being a bit of a wash because of its mismanagement of Zoe.

Looking forward to seeing what next week brings instead!

More like this
You'll Never Guess Which Hollywood A-Lister Big Mo Is Related To IRL
By Sam Ramsden
Jesse Tyler Ferguson Had A Funny Run-In With A Fellow ‘Modern Family’ Alum
By Grace Wehniainen
“The Door Is Always Open” For Another 'Breaking Bad' Spin-Off, Says AMC Boss
By El Hunt
Dan Levy’s Father’s Day Pic Of Dad Eugene Spoofs The ‘Schitt’s Creek’ Vet’s Past
By Grace Wehniainen
Get Even More From Bustle — Sign Up For The Newsletter