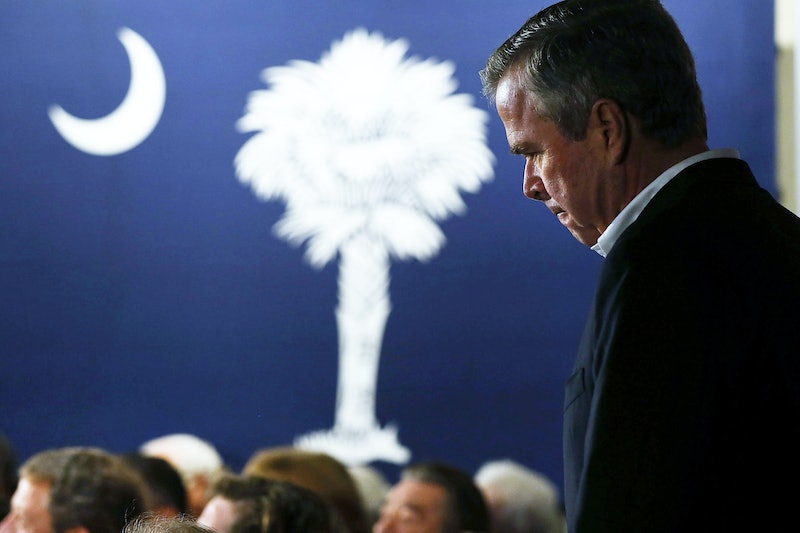 Former Florida Governor Jeb Bush has spent over $100 million on his presidential campaign, but according to the polls, it hasn't been paying off. The Republican candidate has raised and spent more money than any other GOP candidate. However, that financial support hasn't been matched by voters, and these upcoming elections may be the last straw. If he doesn't win big in the Nevada caucus and/or the South Carolina primary, Bush might drop out of the presidential race.

One of the most telltale signs of the candidate's potential withdrawal is his recruitment of his older brother, former President George W. Bush, who joined him on the campaign trail in South Carolina. Though the move initially came across as a confident rallying call, it may represent Bush's last "hurrah," and his final attempt at garnering some much-needed support. Before dropping out, candidates want to ensure that they are remembered for their valiant efforts. They want to exit the stage with a bow and go out with a bang. But leading up to the primary, Bush is going to face some personal advantages and disadvantages in the "first in the South" state that will undeniably help determine whether he can pull through.

According to Real Clear Politics, Bush is polling in last place nationally, averaging just 5.4 percent support in national polls. Among South Carolina voters, he fares slightly better, coming in fourth place, with 10 percent support. The polls suggest that his closest competitors in the state are Marco Rubio, who has 16.8 percent support, and John Kasich, who polls a fraction of a point beneath Bush. Though the candidate is polling low, this primary certainly isn't hopeless for him.

Luckily for the candidate, South Carolina is located close to Florida, the state he once governed. If the stars align correctly for Bush, his Floridian loyalty will bleed across state lines to reach Palmetto State residents. Additionally, Bush's relation to two former presidents contributes to his conservative appeal. For example, South Carolina remains a fan of George W., which became apparent after his rally for Jeb attracted over 3,000 in Charleston. Bush's immense crowds and southern background may be perceived as a source of hope for the candidate, but there's a huge problem: Support for Southern conservatism and George W. might not translate into support for Jeb specifically. In that sense, the candidate is in danger of being placed on the periphery of the political scene.

During the Charleston rally, George W. made an attempt to push that thought aside, ensuring the audience that although he's polling in last place nationally, his brother has a chance of winning against Hillary Clinton or Bernie Sanders, saying:

Well, Jeb hasn't been winning, and he faces some tough competition in the upcoming primary. Rubio is also a Florida legislator, and is therefore also friendly with other conservative states in the South. But Rubio's adopted a specific strategy that might just one-up Bush when it comes to insider support. Over the past few months, he has been getting familiar with South Carolina's legislators and playing up that Southern charm. On Wednesday, just days before the primary, South Carolina Governor Nikki Haley endorsed Rubio, who's already gained the public support of two other South Carolina legislators. Bush had previously called Haley "probably the most meaningful endorsement."

Bush has a lot of things going for him. He comes from a family of two presidents, he had more than adequate funding and resources to conduct a strong campaign, he's familiar with the Southern region of the United States, and he has the endorsement of two former presidents. But if these advantages can't keep his boat afloat in South Carolina, then his already-expensive campaign may have to come to an end. As of now, though, his Twitter profile suggests he's not going to back down until the South Carolina game is officially finished.