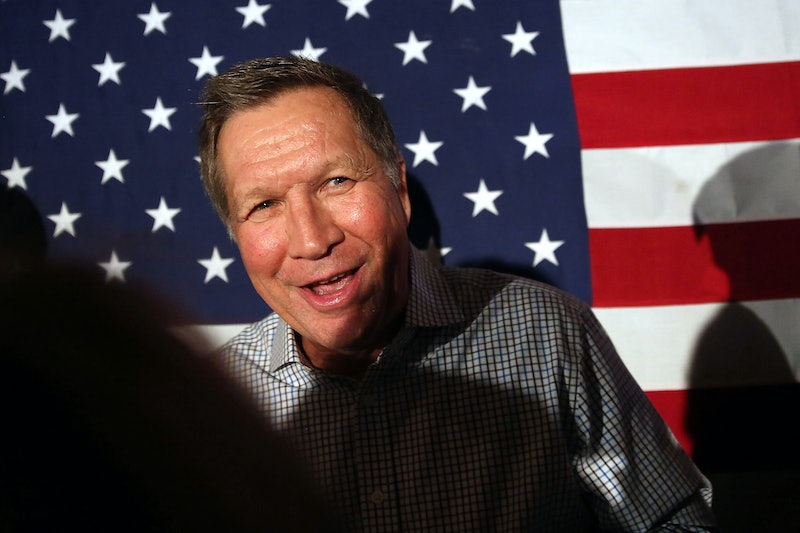 The GOP presidential candidates have given notoriously awful remarks regarding violence against women and have voted just as terribly, so the standard by which candidate John Kasich's answer on domestic violence was judged during Thursday's GOP town hall forum was admittedly low. However, in a party that has time and time again completely skirted around the epidemic of violence against women, it shows a certain amount of political courage to stand up for women and to do so passionately. By this measure, Kasich shows he may in fact be too nice to be a conservative.

His answer came when a woman in the CNN town hall audience asked him how his presidency would address the current, ridiculously high rates on violence against women (one in three women experience physical violence carried out against them by a partner within their lifetime, for one horrific example). Kasich began by putting a scenario in the minds' of viewers: Imagine someone beating up your daughter or mother. He physically shuddered when he thought about his two teenage daughters. He then moved beyond the anecdotal by suggesting the United States needs "an all-out war" against the issue.

In a GOP field that commonly speaks and votes heinously against women, the governor's words were powerful. Even still, voters have to be careful not to take him by his words alone. For example, the entire Republican field has called upon defunding Planned Parenthood at one point, Kasich included. Kasich has consistently voted to defund Planned Parenthood and further restrict access to abortion while governor of Ohio. His only exception has been to allow abortions in the instances of rape or incest.

So make no mistake, Kasich's extreme views on abortion certainly place him far from being an outright ally to women. But, when considering the rest of the Republicans currently running for the nomination, conservatives looking to vote based on the issue of violence against women may find their best (if still weak) choice in Kasich. He, at the very least, hasn't called women "dogs" or "fat pigs" like GOP front-runner Donald Trump has.

Kasich also used his time at the town hall forum to discuss his leadership behind Ohio's efforts to end human trafficking. With the help of activists, Kasich signed a bill into law that has helped end sex trafficking in his state. The 2014 law seeks to punish the perpetrator instead of criminalizing the victim, and has gone on to help thousands of women get rehabilitated.

So while the governor's track record is beyond far from perfect, his answer on violence against women offers a sliver of hope. For conservatives hoping to level the GOP playing field by pushing for a more moderate candidate than the usual extreme options, Kasich may be their guy. His answer Thursday night suggests that there may be hope for his views on women just yet.