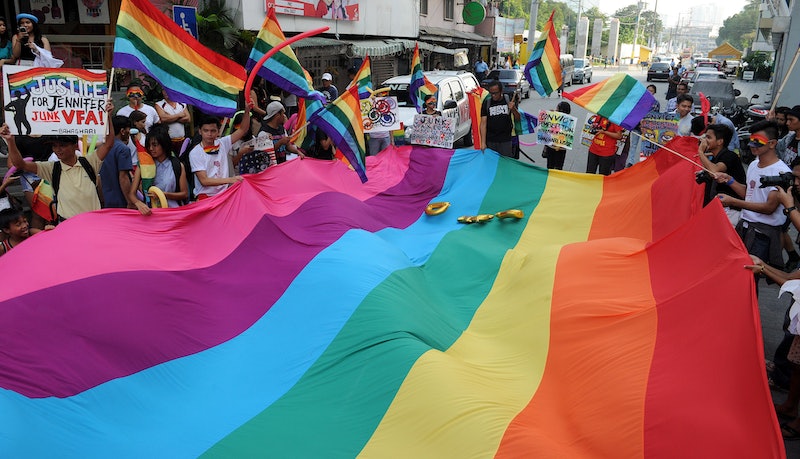 It really is remarkable just how much public opinion regarding same-sex marriage and LGBTQ rights has shifted over the past 20 years — and, encouragingly, it seems that the gains made regarding LGBTQ acceptance aren't going anywhere. A new poll from the Public Religion Research Institute shows that not only do most Americans support same-sex marriage, the vast majority of Americans support LGBTQ anti-discrimination laws. In other words, lawmakers who introduce discriminatory bills can't really say that they speak for some hypothetical silent majority who oppose gay rights. It turns out the real majority is actually very much in favor of LGBTQ people having rights.

The study contains a whole host of interesting findings — for instance, support for same-sex marriage neither increased nor decreased in the wake of the historic Obergefell v. Hodges decision, which ruled gay marriage bans unconstitional; rather, it hovered between 53 and 55 percent throughout May, June, and July of 2015. But perhaps the most significant finding is that 71 percent of Americans favor non-discrimination laws. And startlingly, LGBTQ non-discrimination laws enjoy majority support across every demographic group examined in this poll.

In fact, even religious people support nondiscrimination laws. While members of many religious groups are unlikely to support same-sex marriage, a majority of people from every denomination sampled by the Public Religion Research Institute supported non-discrimination laws.

Religious exceptions for nondiscrimination statutes are slightly more popular, but 59 percent of Americans are still opposed, overall, including a majority in all but four states.

LGBTQ rights have come a long way in the past few decades, and the legalization of gay marriage was a big step towards full equality. However, in many states, it is still legal for employers to discriminate against LGBTQ employees, or for people to deny service to LGBT customers. Trans people are particularly vulnerable to discrimination, and indeed have been the target of a wave of discriminatory legislation of late.

And all of this seems somewhat strange given then, apparently, discrimination against the LGBT community is even less common than same sex marriage. When a majority of people in every state support anti-discrimination laws, you have to wonder, how hasn't this sort of thing been outlawed yet? I have to assume lawmakers are just out of touch.

But hey, with poll numbers like this, hopefully it's only a matter of time.

You can see more findings from the Public Religion Research Institute poll here.