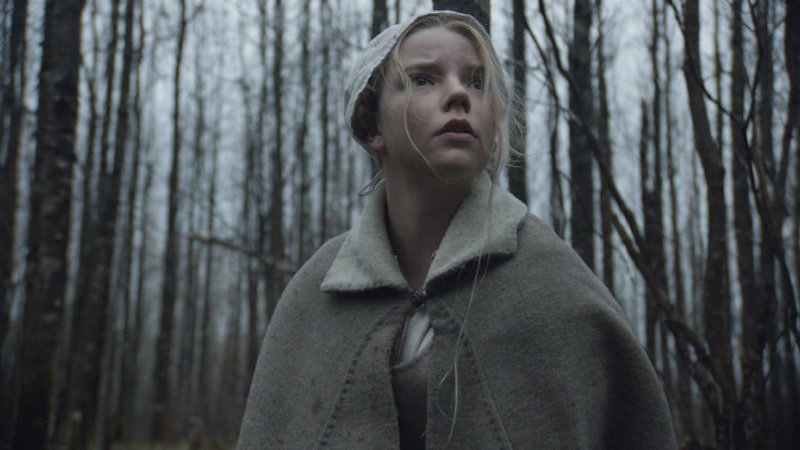 Horror films often carry religious themes, but few of them also incorporate religion's historical tendency to persecute women. Yet The Witch , out now, features a protagonist, Thomasin (played by newcomer Ana Taylor-Joy) who comes of age during a time of extreme oppression. When her baby brother goes missing quite literally right under her nose, it isn't long before Thomasin is charged with witchcraft, and as increasingly terrible things happen to her family, she finds herself facing horrific accusations for invented crimes. And according to the film's director, Robert Eggers, the cruelty Thomasin experiences is due both to her gender — there is, after all, the widely accepted theory that the Salem Witch trials were meant to control women’s empowerment — as well as other, darker factors.

"When someone called you a witch, it wasn't just that they're intimidated by you as a powerful woman; there is some of that for sure," Eggers tells Bustle while in Salem to promote the film. "But it is also that you're actually a fairy tale witch capable of doing all of the horrific, primal, terrible things that the witch does in this film. The fact that that was the belief just shows you how intense it was. That's actually more sexist, it makes the fear of female power even greater than if it were a conspiracy where these people didn't believe in witches."

Indeed, while men were accused of witchcraft and were even occasionally executed in Salem, the male-dominated time period meant that more often than not, women took the brunt of the accusations. According to witch historian and expert Emerson W. Baker, who was on hand over the course of the days' events in Salem, over 80 percent of accused and executed witches were female. Explains Baker, "This is a very patriarchal society, and women are considered the weaker vessel... if Satan is loose and Satan is the great trickster, the great tempter, women's souls are much more vulnerable. They can be attacked because they're weaker. Like Eve and the apple."

This scary sentiment made its way into Eggers' film, which subtly hints at the fact that Thomasin's main threat to the family may lie in her budding womanhood. Says the director, "Female power, like in the earthiest, non-supernatural way becomes twisted into something supernatural... the power that they contain is the Devil."

And as The Witch makes clear, some of the most horrifying events in American history, such as the Salem Witch trials and other witch hysteria events occurring throughout the 17th century, have definite connections to patriarchal oppression, if little basis in non-paranoid reality. "When we talk about witchcraft and witch hunts today, it's about people persecuting people for things that aren't actually real," Eggers says. "But what you need to understand during [this] period [is that] the witch was a reality, a real thing on everyone's mind."

It's always commendable when a male filmmaker decides not only to tell stories featuring female protagonists, but to also explore moments in history when women suffered through unfair and often violent oppression. Thankfully, Eggers will revisit some of the same themes in his next project, which he hints is a medieval epic. "The protagonist is male but there are themes of climbing feminine power that are really important to me," the director reveals. "[The lack of female representation] is a big deficit in western culture and I think that as a society we are slowly getting out of that."

And, he adds, the way to do so isn't necessarily by creating the typical "strong female characters" that have populated cinema in recent years. "Slapping armor on Snow White or Alice in Wonderland and saying that's a strong female protagonist is really just ruining a fairy tale," Eggers says, before adding his take on Star Wars: The Force Awakens: "I think that Daisy Ridley being the new Christ of one of the world's most popular contemporary religions is a very important thing."

And so is a movie like The Witch, featuring one of the most interesting, complex, and genuinely terrifying female movie leads in recent memory.

More like this
An Extremely Messy Ranking Of What Actually Happens In 'Don't Worry Darling'
By Chloe Foussianes
14 Women To Watch This Oscar Season
By Marina Watts
Paul Mescal, Man Of Mystery
By Samantha Leach and Heather Hazzan
12 ’90s Movie References You Missed In 'Do Revenge'
By Radhika Menon
Get Even More From Bustle — Sign Up For The Newsletter