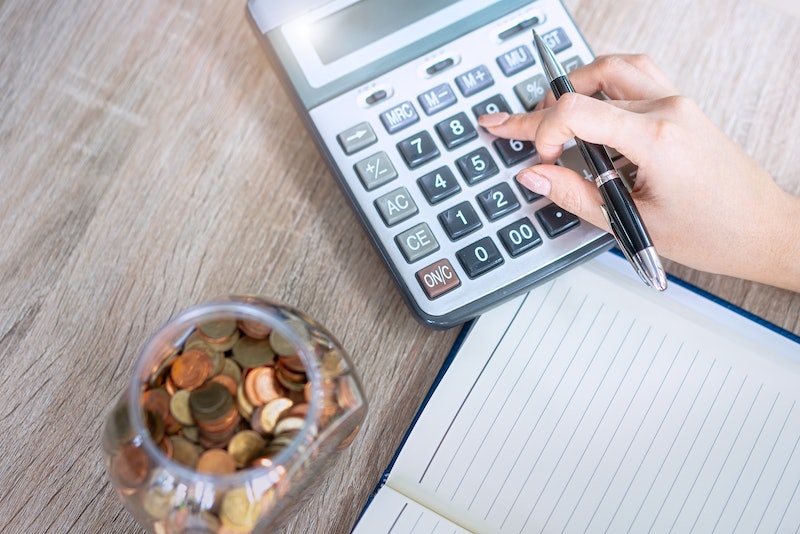 There are a lot of hard lessons that accompany being an adult, but some of the hardest are, without a doubt, about money. You will learn a lot of things about money in your 20s, and as far as I can tell, it only gets more stressful with age. On top of that, no one is ever there to hold your hand through it all or to tell you what you should be doing — you're kind of on your own, and the potential to screw up big time is always in the back of your mind. Fun!

Your 20s are a time when you gain a lot of financial responsibility, and it can be incredibly overwhelming. Even if you grew up budgeting your money, saving, and acting like an adult, it's still different once you're out there in the real world. Many of us end up feeling like we're flailing around, losing money on pointless things and not really making any progress on our savings accounts. Or at least that's how I've been feeling, and I hope I'm not alone (I know I'm not). A lot of financial lessons have been kind of a slap in the face, to be honest.

I've said it before, and I'll say it again: colleges really, really should have a basic course on how to be financially responsible. But they don't, and so you're left working things out by yourself, learning while making lots of mistakes. At 28-years-old, I feel that I've learned a lot (but still have a long way to go), and so I felt the need to create this guide that will hopefully provide assistance to other struggling twentysomethings out there. Here are 18 things you'll learn about money in your 20s.

1. You Need A Credit Card To Build Credit

People love to complain about credit cards (and with good reason — more on that in a minute), but you actually need them. If you don't have student loans or any other kind of loan, a credit card is probably the only way to build up your credit. It's the only way for anyone to see that you know how to pay back your money responsibly — that's how you build up credit. A friend of mine thought that they had good credit because they never had a loan or credit card, but that actually means you have no credit, which is not ideal. Get a credit card, don't use it often, pay it back responsibly, and you'll be OK.

2. Paying Things Off Slowly Is Better Than All At Once

Literally everything is so much money. I know this sounds obvious and silly, but it's true. It's not until you're financially responsible for everything in your life that you realize how quickly things add up. It's scary and jarring if you haven't realized it already.

4. Everything Always Hits You At Once

Your car will always break down two days after you pay five expensive bills, and then a few days later, you'll be hit with a doctor co-pay or... you get the idea. The point is, big money issues always seem to happen at once, which can be so overwhelming. This is why it's important to have money saved, even if it's just a little bit. You need that cushion to fall back on.

5. Credit Card Debt Is So Real

Remember how I said credit cards are necessary, especially if you don't have loans to pay back? They're also kind of evil. Credit card debt is real and terrifying, and it happens so much faster than you think. It can also follow you for a long time, so you have to keep on top of it and be strict with yourself.

6. Food Takes Up Most Of Your Paycheck

When you start paying for all of your own food, you will also spend a lot of time wondering how the heck food costs that much money. Forget buying takeout or going out to restaurants — even just doing basic grocery shopping adds up fast.

7. You Have To Ask For Raises

No one is trying to hand you money when you're an adult — no one. If you think you deserve more money at work, you have to ask for it. It's very rare that you are just handed an impressive raise without having to remind people that you deserve it. Before I had a career, I assumed that pay raises just happened regularly, but that is actually a laughable concept.

I remember the first time I got a raise. It was for $10,000 extra a year, and when I first heard that number, I was stoked... until I got my paycheck and realized it only comes out to a few dollars more per check. Very disappointing. Money just takes on a new value as you get older.

9. Having A Full-Time Job Is Not A Miracle-Worker

When I was in college working as a waitress, I always thought that my life would be financially easier once I had the full-time job I wanted. I imagined that I would finally be able to really save more, that I would be able to book vacations without caring about the price tag, and that I would quickly make enough money to move out. LOL. While full-time jobs absolutely help, they are not going to change your life immediately. First of all, it can take years to get to a good salary. Second, with a full-time job comes other expenses: benefits, commuter fees, 401Ks, work clothes, food, etc. It's tough!

10. Procrastination Can Seriously Hurt You

As an expert procrastinator, I know how easy it is to think about a dwindling bank account, but do nothing about it because you'd rather not think about it too long. Or how simple it is to blow off bills that come in the mail because you'll deal with it later on. Or, even worse, how you can put off taxes until you're scrambling at the very last minute. But unlike a classroom situation where you can at least try to make an excuse to a teacher to get an extension, procrastinating when it comes to bills and payments and taxes can lead to debt, expensive fees and fines, or even, uh, jail. It's no joke.

11. Tracking Expenses Is Tough But Necessary

I absolutely hate budgeting my money and tracking my expenses because it makes me uncomfortable and anxious. It makes me anxious because I know that sometimes I spend my money on the wrong things, and I don't want to be confronted with that. But tracking your expenses is one of the best ways to cut out unnecessary spending and budget your money better. It's not fun, but it is very helpful.

12. Investing Is A Good Idea If Possible

A lot of people always talk about investing as if it's something you can only do far in the future, and for many people, that is true. Investing requires money, which is why it's not something a lot of twentysomethings do. But if you are able to invest in something like real estate or stocks, you should. You have to be smart about it and you shouldn't do it if you're struggling, but if you do it right, it can be very helpful.

As a college student, I assumed that once I had a health insurance plan, I could go to any doctor and anything would be covered. Once I graduated, I knew that wasn't true — but I still thought that I could go to doctors who were covered under my insurance and not owe anything. Again, not true. It's hard to find a great health insurance plan. Besides the fact that you still have to pay co-pays, there are also deductibles to think about, as well as lab fees that often aren't covered.

14. Interest Rates Are So Important

Everyone says this, so it can get annoying, but it's so accurate. Please pay attention to the interest rates when credit card companies are knocking down your door. Sure, the perks sound great, but if the interest is at, like, 22 percent, you're going to get screwed.

15. Yes, You Should Start Saving For Retirement Already

You're 23-years-old working your first full-time job — you don't need to think about retirement already! Right? Wrong. You should start a 401K as soon as you start working. Why wait? You don't need to put thousands of dollars in right away. Even a small amount is better than nothing.

16. Taxes Are Confusing And Annoying

You might already know this, but taxes seriously are the worst. First, no one tells you how to do anything, so you have to figure it out on your own. Doing your own taxes is hard and not something I recommend to people who have no idea what they're doing. Bringing your taxes to get done can sometimes cost as much as you're getting back. And, if you're like me and you file incorrectly, you don't get any money back and you owe money! So fun.

17. Saving Is A Really Long Process

I realize this sounds obvious, but for real: saving a good chunk of change can take such a long time. I was so irresponsible when I was younger and didn't save anything because I wanted to "live in the moment." I worked as a waitress making hundreds of dollars in cash every weekend, and blew it on clothes and drinks and vacations. I could slap myself! I've been saving heavily for the last few years, but honestly, it's tough.

18. Bragging About Being Clueless Will Get You Nowhere

I see a lot of posts online about how twentysomethings know nothing about money, or memes about wasting your last few dollars on wine. These are funny and light-hearted, but at the end of the day, there's nothing cute about being clueless about money. It's dangerous and it could mess up everything for you. So, learn what you can, and be as responsible as possible. It's OK to admit that you're overwhelmed and confused and that you need help, but it's not OK to shrug it off and act like it's no big deal. Trust me.