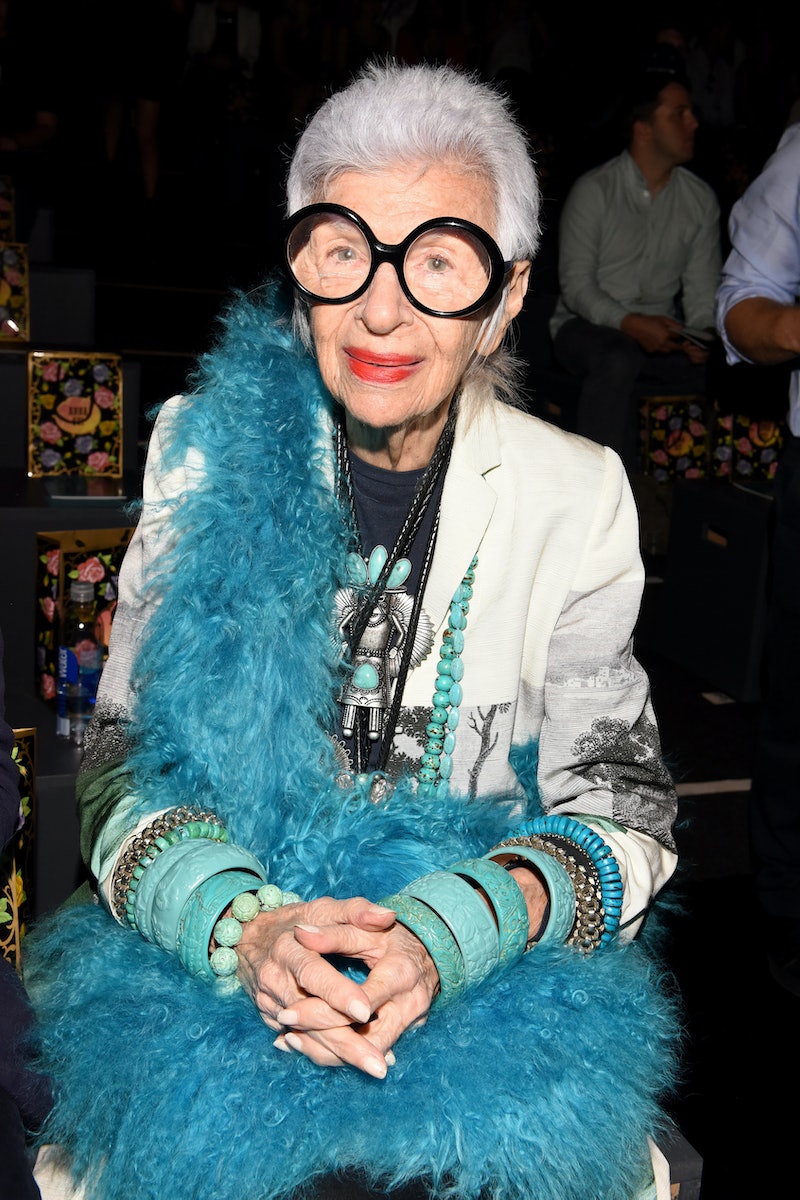 When people think of models, they don't typically picture women in their mid-90s, but this is not your average elder. Iris Apfel landed an ad campaign with Blue Illusion at the age of 94, and that's not even the best part! Don't think this woman' is just a pretty face — she's also working with the brand creatively all along the way as well. This fashion icon might be older than you, but she way cooler than you as well.

Apfel has got so much going on career-wise that she actually refers to her life as "busy to the point of insanity," according to an interview with People. That's not stopping her from being fabulous, though. The expert dresser and on-point accessorizer is the new face of Blue Illusion, an Australian boutique with Parisian aesthetics, but she's doing plenty of work behind the scenes as well.

The Spring 2016 ad campaign will not only be starring Apfel, but it will be styled by the woman herself and shot in her apartment, People reports. How fabulous is that?!

“All of the accessories in the campaign were mine. I accessorized everything,” Apfel told People. “I have a very big collection. I’ve been collecting since I was 11 years old. I’m 94 now, so do the arithmetic. It’s a lot of stuff.”

If you think this news is amazing, you'll be astounded to hear that she's involved in tons of diverse projects at the moment as well. "Busy to the point of insanity" is an understatement, but in the words of Apfel herself, via People, “Oh my god, I love being busy, I think it keeps me alive. I’m probably the busiest person you ever heard of.” Well said, Apfel.

After seeing what she's involved in at the moment, you'll understand just how fabulous she is.

The 94-year-old is teaming up with WiseWear to reach a whole new demographic with their wearable technology.

This one threw me for a loop, but the style icon is a brand ambassador for the car company. Apparently they were looking for an icon to be in their ad campaigns.

Held in Paris, Apfel will be the star of an exhibit at Le Bon Marché titled "Iris in Paris."

She was recently interviewed by her close friend Steven Caras for a luncheon series at the Kravis Center. Tickets to see the fashion star were $85 a piece.

Talk about staying active! If only I could be this awesome — and this well dressed — when I'm in my 90s.

Want more cool fashion? Check out the video below, and be sure to subscribe to Bustle’s YouTube page for more hacks and tricks!