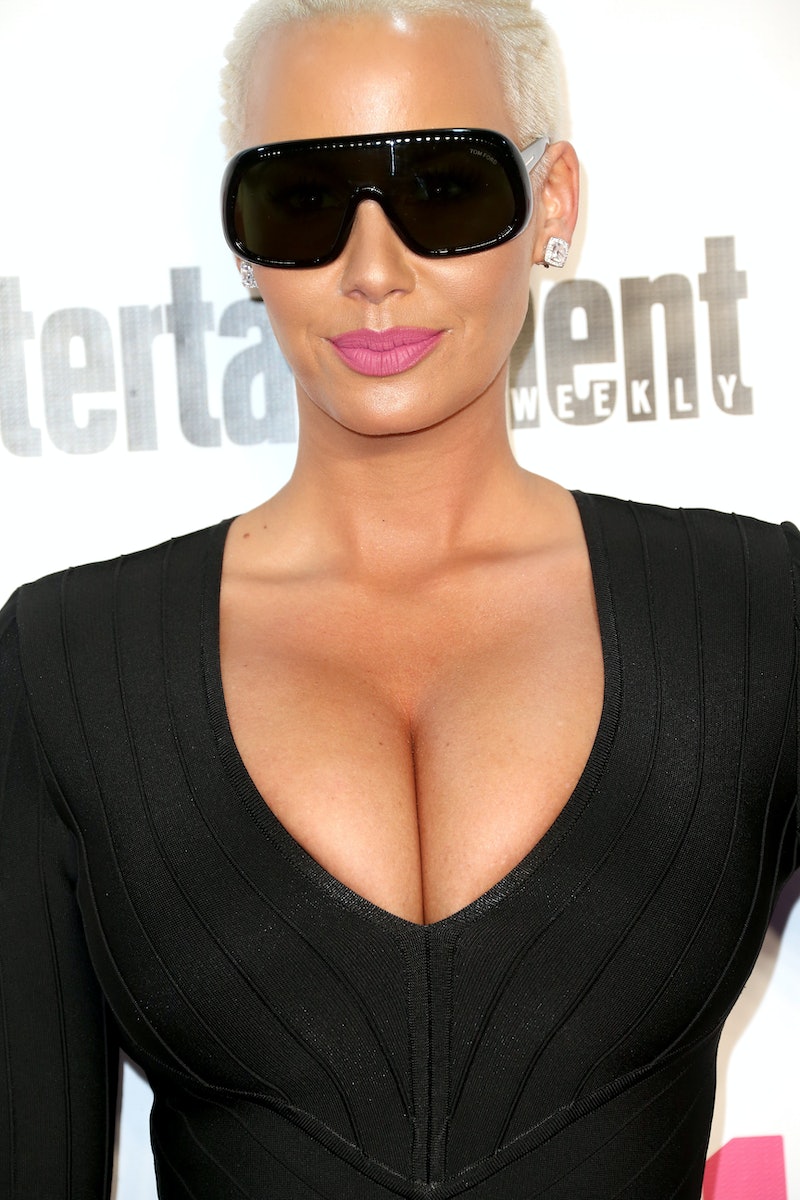 So far in 2016, model and actress Amber Rose has made it clear that she is not going to put up with any BS. First, there was her rebuttal to Kanye West's unfair jabs at her, and now, the most recent instance: During an appearance on It's Not You, It's Men, Amber Rose talked consent with Tyrese Gibson and Rev. Run. Well, that wasn't the purpose of her visit to the talk show — but, looking at the clip, she was really left with no choice.

It all starts when the male hosts of the show begin discussing topics relating to consent — specifically, Gibson brings up the example that someone looks at a basketball player and knows they're a basketball player, so they ask to play basketball with them and then compares it to the "energy being sent out there" by some women. Rose begins to emphatically repeat that it's not the same thing, before going on to explain the fact that one's clothing has nothing to do with consent — and that verbal consent trumps anything that might be implied by clothing or behavior:

Rose's words were met with enthusiastic applause from the audience, and it gave me chills. When Rev. Run responded by saying "I've heard a quote, 'dress how you want to be addressed,'" she shut it down, immediately. When the audience applauds him, she says "oh, boo ... stop that," to them and then explains to Rev. Run that "that's not realistic."

Rose didn't back down once, though she does later add that she's mad at society, not them individually. She also described herself as a former slut-shamer. I loved this point, because it's easy in conversations about activism to present those perpetuating social ills as evil, and those fighting against those ills as blameless. But Rose admits that she has participated in the culture of slut-shaming, and suggests that those who do aren't consciously evil, but just acting in the way a sexist society has trained them to. It's important to note, however, that she's asking them to stop.

Of course, this isn't the first time that Rose has taken up feminist causes. As she mentions in the video, she hosts a slut walk, and she's also appeared in feminist videos like Funny or Die's "Walk of No Shame." Additionally, along with Blac Chyna, she notably dressed in the insults that have been thrown at her at the 2015 MTV VMAs.

Alongside her activism, this video is especially empowering because this conversation has played out so many times between frustrated feminists and stubborn listeners. To see Rose defend her words without getting angry is inspiring for me; I'm someone who too often backs down or gets too emotional when faced with confrontation, even when I know I'm right. Seeing her courage while staring a whole audience down while they applauded words she didn't agree with is similarly inspiring. I hope I can have that kind of courage and calmness the next time someone describes a woman as a slut, and channel Rose with a calm, but forceful, explanation for why that's wrong..

Rev. Run and Tyrese's reps did not immediately return Bustle's request for comment.

More like this
Sandra Bullock, Girlboss Extraordinaire
By Matt Harkins & Viviana Olen
Spice Girls’ Net Worth: The Richest Member Is Wealthier Than The Rest Combined
By Hugh McIntyre
Kourtney Kardashian & Travis Barker’s Italian Wedding Photos Are Finally Here
By Grace Wehniainen
These Adorable Kourtney & Travis Moments Led Them To The Altar In Italy
By Bustle Editors
Get Even More From Bustle — Sign Up For The Newsletter