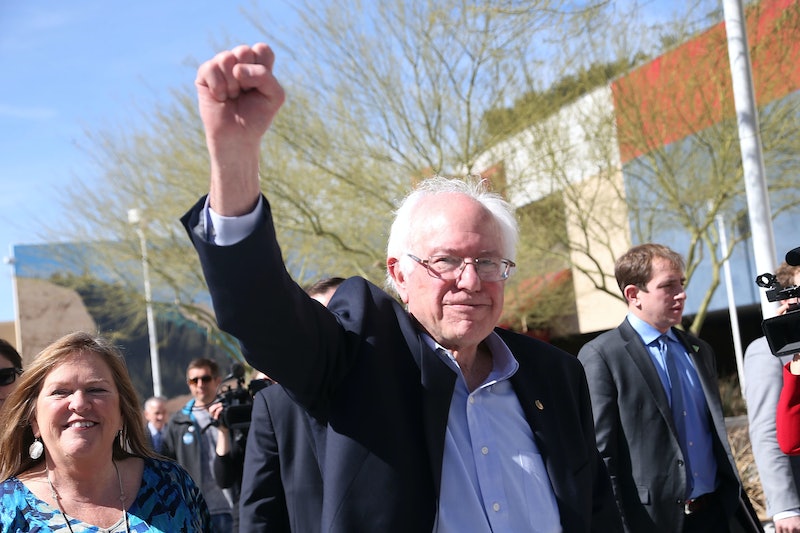 In the beginning of February, Sen. Bernie Sanders was thought to be impossibly far from a victory in Nevada's caucuses. While there have been few polls from the state, those that were conducted before February showed Hillary Clinton with a strong double-digit lead in the state. Indeed, Clinton won in Nevada on Saturday, but only by a narrow margin. So, while technically a loss, the closeness of the race has left the campaign optimistic, which is reflected in Sanders' comments on Nevada. Here's his official campaign statement:

Bernie Sanders on Saturday congratulated Hillary Clinton on her victory in Nevada’s closely-contested caucuses and looked ahead to carrying his campaign for the White House to primaries and caucuses across the country. “I just spoke to Secretary Clinton and congratulated her on her victory here in Nevada. I am very proud of the campaign we ran. Five weeks ago we were 25 points behind and we ended up in a very close election. And we probably will leave Nevada with a solid share of the delegates,” Sanders said. “I am also proud of the fact that we have brought many working people and young people into the political process and believe that we have the wind at our back as we head toward Super Tuesday. I want to thank the people of Nevada for their support that they have given us and the boost that their support will give us as we go forward,” Sanders added. The close Nevada outcome follows Sanders’ 22-point victory on Feb. 9 in New Hampshire and a virtual tie on Feb. 1 in Iowa. The contest moves next to South Carolina, where Democrats vote on Feb. 27, and then to states across the country.

Exit poll data from NBC News on Saturday showed that Sanders did indeed garner the support of young voters and those who have never caucused before (some, presumably, because they weren't old enough in past elections). He had a sweeping majority of the vote from caucus-goers in the 17-29 age bracket, and a decent lead among those aged 30-44. More than half of first-time caucus-goers sided with Sanders.

Sanders elaborated on his feelings Saturday night during his post-caucuses speech, tying the new energy his campaign has drawn to his familiar stump speech:

What this entire campaign has been about is the issue of momentum, is the issue of bringing more and more people into the political process. ... [W]hat I think is happening is that, as people hear our message — and it's a tough message — ... we have a corrupt campaign finance system which is undermining American democracy and must be changed. We will not allow billionaires and their Super PACs to buy elections in the United States of America, and the American people are catching on.

The Sanders campaign sure could use some wind at its back going into the South Carolina primary on Feb. 27; Clinton has maintained a more than 20-point lead over Sanders in the Palmetto State in recent polls, according to Real Clear Politics. Whether a near-tie in Nevada will help boost him in South Carolina primary, and, more importantly, in the 11 Democratic contests on Super Tuesday, aka March 1, remains to be seen. For now, Sanders will take a moment to appreciate the tremendous progress his campaign has made.