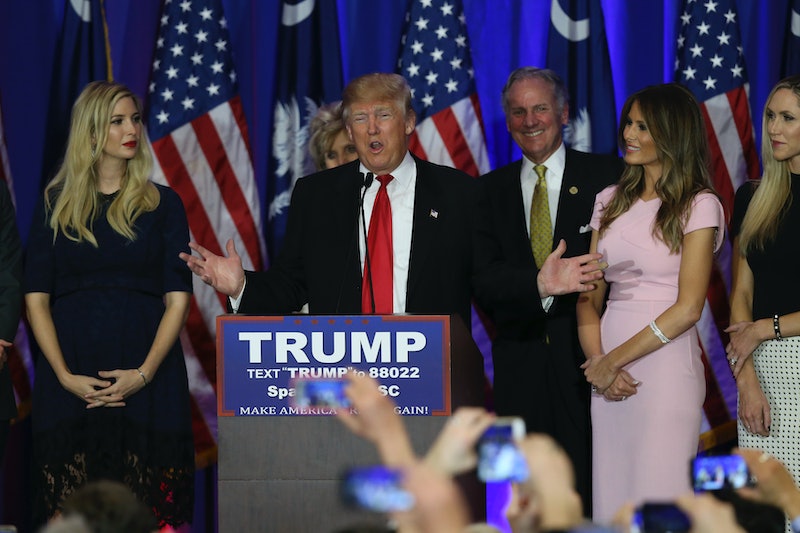 The South Carolina Primary proved to be almost as wild as the incredibly close Democratic Nevada Caucus that unfolded earlier on Saturday. Early leads were established for Marco Rubio, Ted Cruz, and Donald Trump, with frontrunner Trump simply dominating less than an hour after polls had closed. Though the GOP field has become a bit clearer, the race in the Palmetto State was not without its harrowing moments. Republican presidential hopefuls have been campaigning all week long in South Carolina; none more notably than Trump, who feuded with Pope Francis and continued his war of words with fellow candidates Cruz and Jeb Bush. Somehow the divisive rhetoric was enough to captivate Republican voters and the Donald handily won the "first in the south" primary. Donald Trump's South Carolina primary victory speech reflects some of that fiery language while also including some kinder, sweeter moments.

South Carolina is an important state to gain momentum in. Its results may very well predict which candidates will be left by the time the Republican National Convention is held in July. Since establishing itself as an early primary state for Republicans in 1980, all but one primary winner in the Palmetto State has gone on to nab the GOP presidential nomination. Add to that the fact that Trump simply dominated the New Hampshire primary and it seems as if his nomination for the Republican party is all but inevitable. Every Republican candidate who has won both early primaries has gone on to do so. Trump exuded pride and excitement at the realization.

His victory speech was certainly inspired, reflecting just how far the candidate has come since first entering the political ring and including some special guest remarks from his wife and daughter. Trump first kicked off his speech with a shocking barb against South Carolina Gov. Nikki Haley, however. After thanking supporters, Trump had this to say about Haley:

Regardless of the statement, the Donald was simply overjoyed about his victory and enlisted the help of wife, Melania, and daughter Ivanka to address a massive crowd at Trump HQ in South Carolina. Melania exuded pride and stated that her husband "will be the best president." "He's working very hard and he loves you and we love you," Melania said in her brief statement. Ivanka was next and said to supporters of her father:

This is an amazing, amazing night. The momentum since the beginning of this campaign has been unbelievable and that's because my father's message resonates so deeply with so many people. As a family, we're incredibly proud. We're incredibly grateful to each of you and thank you for being here to support us. I will say this: my father is an incredibly hard worker and he will be working for each and every one of you. Together we'll make America great again.

The candidate addressed issues of immigration, utilizing a call and response technique that has now become de rigueur in Trump speeches. Trump spoke in depth about the proposed wall he wants to build between the United States and its neighbors to the south. His fans shouted "Mexico!" when the Donald asked who would be footing the bill. His "Make America Great Again" slogan was also mentioned repeatedly, and not just by Trump, as indicated by Ivanka's aforementioned comments. Many of his statements appeared to be par for the course.

What truly stood out as the candidate decried the many ways he sees the country losing was what Trump had to say about his fellow candidates. The Donald took the time to congratulate two of his fellow candidates for their efforts in South Carolina before launching into a lengthy oration on his policies. Trump said:

I want to also congratulate the other candidates. In particular, I have to say Ted and Marco did a really good job and they did quite well as I understand. I just want to congratulate the other candidates. There's nothing easy about running for president. It's tough. It's nasty. It's mean. It's vicious. It's beautiful. When you win, it's beautiful.

The kind remarks came as a bit of a shock but his sentiment that politics can be beautiful shows just how much Trump has been enjoying his campaign and how potentially humbled he may be by the outpouring of support. Such friendly statements in a victory speech may show a new side of Trump as he continues to attempt to tone down his language and prepare for a possible presidential nomination.