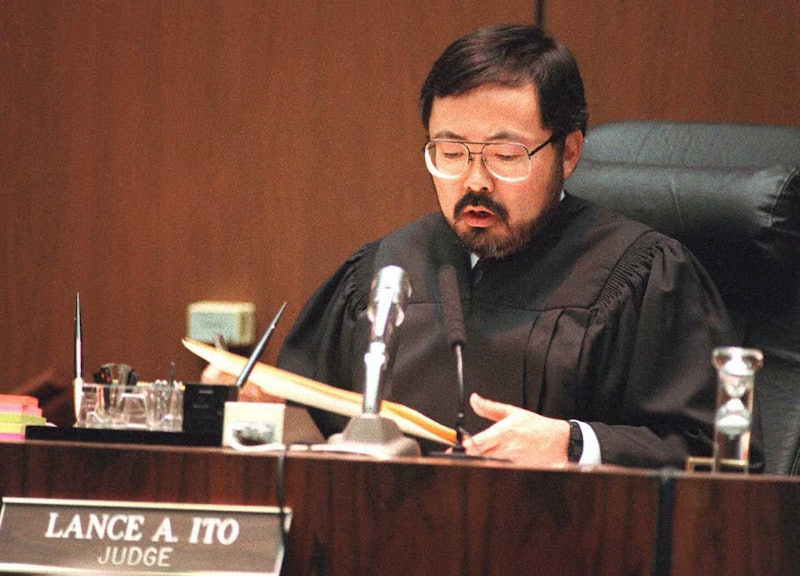 Although no one has forgotten about the biggest trial of the 20th century, Ryan Murphy's new series The People v. O.J. Simpson: American Crime Story has brought renewed attention to the O.J. Simpson case and its major players, including Lance Ito, the judge who presided over the Simpson trial. The series goes behind the scenes to show viewers how prosecutors and defense attorneys carefully constructed their cases in the months leading up to the trial, which was watched by millions after Ito made the controversial decision to allow cameras in the courtroom. It's been over twenty years since 150 million people halted everything they were doing to watch the verdict live — Simpson was found not guilty of the murders of Nicole Brown Simpson and Ron Goldman. The trial marked the beginning of an era where it's now common for cameras to be present in courtrooms, but where is Judge Ito today and how does he feel about the case in hindsight?

In the years since the Simpson trial, Ito has kept out of the public eye and has given precious few interviews or statements. On the rare occasions that he's spoken to the media, Ito hasn't commented on the Simpson case. Last October, NBC News reported that Ito had presided over 500 cases since the Simpson trial before retiring in January 2015. He had few post-retirement plans aside from learning to play the guitar. The article also noted that Ito had recently celebrated his 34th wedding anniversary and resides in Pasadena, California. Although Ito declined to be interviewed for the article, his friend and former Los Angeles County District Attorney Robert Philibosian stated: "He's having a wonderful retirement... They travel and they have a huge group of friends."

While the prosecutors and defense attorneys in the case went on to pen books and provide interviews, Ito's public statements have been practically nonexistent and he hasn't commented on the Simpson case. In a rare interview, Ito briefly spoke with Fox News in 2012 and said this:

“I’m still ensconced on the 9th floor of the Downtown LA Criminal Courts Building, trying one long cause/complex criminal matter after another. It’s probably [been] 150-plus jury trials since OJ... I’m married to the same woman [a now retired chief of police], live in the same neighborhood, drive the same car, but looking forward to retirement in the not too distant future."

But, just because he wished to stay out of the public eye didn't stop people from trying to find him. In fact, The Los Angeles Times reported in 2009 that Ito's name placard had been stolen so many times that he'd stopped replacing it and he was therefore the only judge who didn't have a name plate outside his courtroom.

Although American Crime Story has brought his name back into the public eye, it seems highly unlikely that Ito will break his silence anytime soon.

More like this
The True Story Of Candy Montgomery From Hulu’s True Crime Series
By Radhika Menon
The Staircase Explores The Murder Trial That Ripped A Family Apart
By Gretchen Smail
David Rudolf, Michael Peterson’s Attorney In 'The Staircase,' Is Still Practicing
By Taylor Maple and Morgan Leigh Davies
Where Michael Peterson From 'The Staircase' is Now
By Justice Namaste
Get Even More From Bustle — Sign Up For The Newsletter