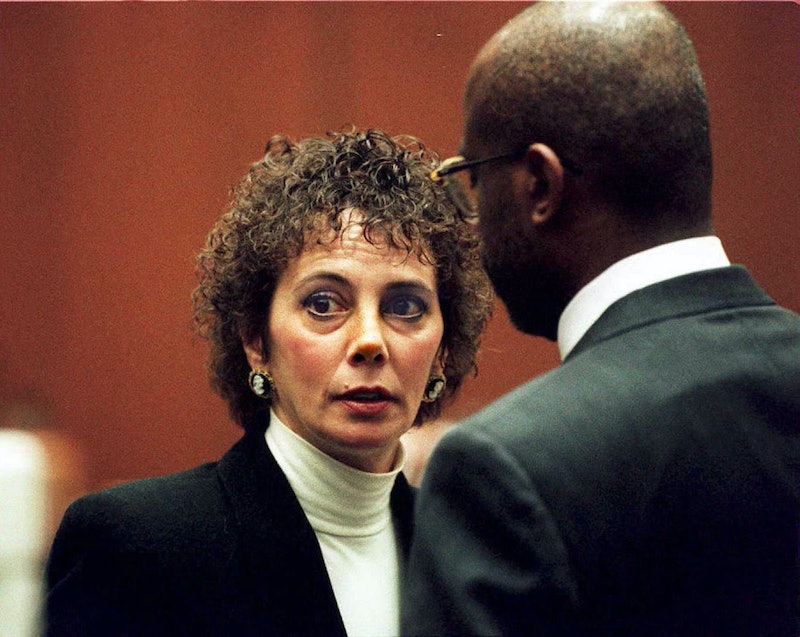 FX's buzzy new anthology series, American Crime Story: The People v. O.J. Simpson , is such superbly crafted entertainment that it can be occasionally hard to remember that this all happened to real people. The drama, the passion, the cliffhangers, the clashing egos — the entire thing is practically ripped straight out of a primetime soap. To be fair, the original 1995 trial often felt that way as well, in many ways becoming the country's first brush with "reality television" as we know it today. But, it is about real people — and one of them, prosecutor Marcia Clark, wants to remind everyone of that fact, speaking out passionately about her opinions of Ryan Murphy's show. So what does Marcia Clark think of American Crime Story ? Bustle reached out to Clark for comment and was provided the following statement.

I think the series is terrific. It really does a great job of exploring the big themes in the case and offers insight into all the characters in a very compelling way. And kudos to Ryan Murphy for exposing the rampant sexism both in the media coverage and the courtroom itself. No one has been willing to talk about that till now. I hope it'll prove to be helpful to all women. Sarah Paulson, who is always brilliant, is simply fabulous in this role. Her performance is compelling, nuanced, powerful and sensitive. It's an honor to be played by someone so incredibly talented.

And, she's been speaking out to many other publications on the show as well. Perhaps unsurprisingly, her first thoughts were of herself and the bizarreness of the situation, as she told Vulture the day of the premiere. "It was very surreal. 'There's me! But I'm right here? But I'm right there.' It felt a little out-of-body, you know?" She also admitted to Vulture to being flattered that someone of the Emmy-nominated caliber of Paulson would be portraying her. "I thought, 'Well, you know, that's a pretty big honor.' I've been a big fan of hers for many years, and I think she's a brilliant actress."

Despite the particularly brilliant stroke of casting, Clark admitted she originally hoped the series would somehow never materialize, as she told Entertainment Weekly in a separate interview also on the day of the premiere. "Misery. Absolute misery," is how she described her reaction to hearing the initial news. "I kept hoping and praying, 'Please, please don’t let this happen. Make something go wrong. Make someone think this isn’t a good idea.' Projects in Hollywood, as you know, go away all of the time."

She went on to clarify to EW that her feelings of "misery" weren't because she thought the show would be bad, necessarily; rather, the memories are still just too painful for her:

The whole experience of that trial was a nightmare. It tore me up. I can’t tell you. I watched justice get thwarted from almost day one. It was a runaway train from the start. Things happened that should never happen. It was crazy. It got crazy really fast, and it only got crazier as the days and months went by. Everybody seemed to forget that two innocent people were slaughtered — not just killed, slaughtered. It was hideous. No one seemed to remember that. The prospect of reliving it and having it all over the world again, not a happy one.

She also discussed the accuracies and inaccuracies of the show at length with Vulture, from the small — she claims to have asked to partner up with co-counsel Bill Hodgman, rather than having been assigned; it didn't take her as long to recognize O.J.'s name on the phone as the show depicted — to the very large… namely, the fictional Marcia's overconfidence at the beginning of the case. "Oh God. That is so not true. I'm sorry, the truth is, we were not [confident]," she told the website. "We've got to look confident, though. I'm not going to go out to the press and say, Oh, we're going to lose! I have to present a confident case. It was clear months before the trial started that we were in big trouble."

Clark told EW that she had a support group with her when she viewed the premiere: "I had a couple of friends with me so that I would not climb out on the balcony ... and also to give me a perspective on it all. When I watch it, all I can do is think about what went wrong and what was crazy about it," she told the magazine. "I go back into the nightmare. I needed people there to kind of balance me out and say it’s all right, to get a normal person’s perspective on it because I don’t think I am."

The morning after the premiere, Clark appeared on ABC's The View to share her thoughts on the episode specifically. She started by enthusing that, "I think [the show's] amazing, really amazing," before stating that she "can't watch it the way most people do" because it "hurts too much" and then lauding Murphy for possessing "the vision and the guts to pull out the important issues," referring to the racism and sexism prevalent in the case. "They really nailed the racial issue in the biggest way possible," she told the hosts, "I mean, people will talk and that's a good thing."

It's not all "nightmares" and "misery" for Clark, however. She did mention one funny moment to Vulture when she spoke with Paulson and personally apologized for her very dated hairstyle. "Oh, man, sorry about that hair, man," she recalled telling Paulson.

Given her mixed feelings at the outset of the show, Clark isn't sure if she'll continue watching the rest of the season. "That’s a toughie," she told EW. "It has nothing to do with the series. The series is a quality effort. I think Ryan Murphy did a beautiful job, just from what I’ve seen in the first two [episodes], no question. And, of course, Sarah, what a wonderful actress! But, I don’t know if I can make myself do it. I don’t know if I’ll survive it. It’s just so awful."

Thankfully for the prosecutor, ACS is an anthology show — which means that in another eight episodes the story of The People V. O.J. Simpson will be over, and Clark will be able to enjoy Season 2 of the show (which will focus on the aftermath of Hurricane Katrina) as just another regular television fan. For the rest of us, ACS returns this Tuesday night with its third outing, "The Dream Team," as the suspect's legendary team of lawyers starts taking shape before the trial.

More like this
Owen Warner's Net Worth Might Surprise 'I'm A Celeb' Fans
By Sam Ramsden
Here’s Everything Coming To & Leaving Netflix In December
By Jake Viswanath
The 'Kenan & Kel' Reunion On 'SNL' Took A Dramatic Turn, Thanks To Keke Palmer
By Brad Witter
These 'Criminal Minds' Throwback Photos Show The Cast’s 17-Year Evolution
By Grace Wehniainen
Get Even More From Bustle — Sign Up For The Newsletter