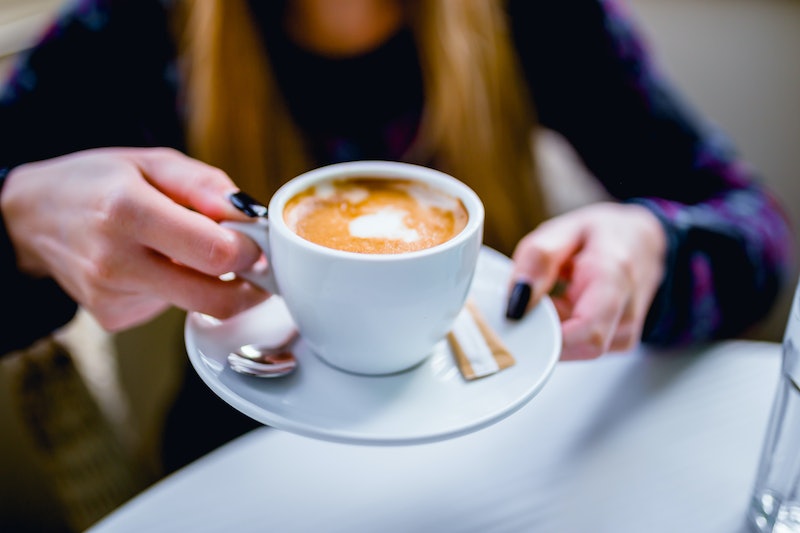 There's nothing more satisfying than taking that first sip of your cup of joe in the morning, but what makes it even better? Besides just being delicious, coffee actually has some pretty major health benefits. A new study has just revealed that a higher intake of coffee has been linked to a reduced risk of cirrhosis, a chronic damaging of the liver.

Why is this? As most of us know by now, coffee contains antioxidants that help repair cellular damage and reduce inflammation — all of which go a long way towards easing the symptoms a damaged liver. This could certainly be a potentially important finding for those with the disease. Still, as Forbes points out, there is one hugely important distinction to make in terms of the study's findings: though drinking more coffee may be correlated to a reduced risk of cirrhosis, coffee alone can't reverse all the damage that alcohol can do.

Too much alcohol has been linked to a wide range of health problems, from heart disease to cancer to dementia. Cirrhosis is just one of the many possible illnesses that can be caused by overconsumption of alcohol. So while coffee may lead to a significant reduction of risk for liver damage, it won't necessarily treat any of the other negative side effects associated with heavy drinking. It's important to drink responsibly, regardless of how much coffee you consume.

That being said, there are plenty of reasons to continue your coffee habit, other than a potential reduced risk in developing cirrhosis. Here are three other health benefits of drinking coffee:

1. It can help lower the risk of Parkinson's disease

Several studios have found that coffee drinkers have a lowered risk of developing the neurodegenerative disorder, Parkinson's disease. As previously mentioned, this is partly due to the wide range of antioxidants that coffee has, which help fight off disease. The caffeine itself also helps ward off the condition, so decaf drinkers may not enjoy the same level of reduced risk.

2. It can enhance your memory

The caffeine in coffee has also been found to have a positive effect on long-term memory. A 2014 study in Nature Neuroscience found that caffeine enhances certain memories at least up to 24 hours after it is consumed.

3. It can lower the risk of certain cancers

Researchers have concluded that frequent coffee drinkers have a lowered risk of both liver and colorectal cancer, two of the most common types of cancer worldwide. Again, this is due to the abundance of inflammation-busting antioxidants found in coffee.

So while coffee may not completely ward off the damage brought on by long-term drinking, it's certainly working hard to protect your body in other ways. Just another reason to go ahead and pour yourself another cup, right?