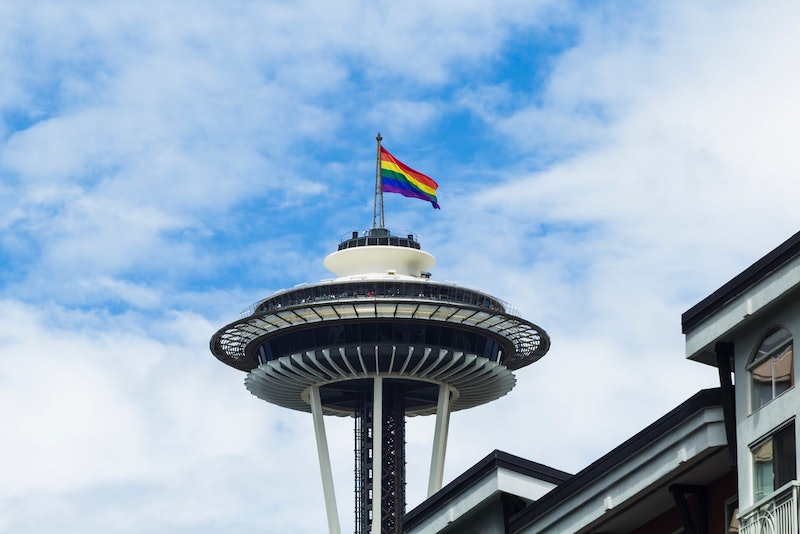 Travelling while lesbian, gay, bisexual, trans, queer, or otherwise non-conforming is no easy task. Even in the United States, it's no secret that there are pockets of the country that aren't particularly friendly towards LGBTQ people. But there's more good news than bad news here: Despite the intolerance of certain parts of the country, there are a wide variety of LGBTQ-friendly travel destinations in the United States to put on your bucket list if you're looking for some fun, a welcoming community, and (most importantly) safety.

So what makes a place "LGBTQ-friendly?" Different people have different definitions, but to me, an LGBTQ-friendly place has a few different components: LGBTQ-friendly businesses, community outreach services, LGBTQ people in city council or office, low (or, ideally, non-existent) levels of hate crime, a relatively high percentage of LGBTQ residents, and spaces around the city designated specifically for LGBTQ people to meet one another, hang out, and feel safe.

Some areas of the United States are well known for their LGBTQ friendliness, like San Francisco and New York City; however, they're far from the only LGBTQ-friendly travel locales out there. For example, many coastal cities and states bordering Canada are great places for LGBTQ acceptance and safety, both for tourists and locals. So the next time you start planning an adventure, check out these five LGBTQ-friendly places and have a grand old time!

If you've a queer lady and have seen The L Word, your perception of Los Angeles is probably something along the lines of streets, cafes, art galleries, and bars all being filled with hot queer women throwing you flirtatious glances and offering to buy you a drink — and depending on what part of LA you're in, that's actually not so far off from the truth. A lot of the queer action happens in West Hollywood; it's filled with LGBTQ friendly clubs such as The Abbey, one of the most famous clubs in the country, and Fubar, which mostly attracts a gay, male crowd. In addition to nightlife, WeHo has a lot of cafes and eateries that cater to LGBTQ clientele; among them is Urth Caffê, which is basically The Planet from The L Word. If you drive down Santa Monica Boulevard in WeHo, you'll find lots of LGBTQ-friendly sex toy shops, party stores, and clothing boutiques. Oh, and for all the cute queer beach babes, head to Will Rodgers State Beach between Santa Monica and Malibu.

I'm proud to say that my hometown loves the gays. Whether you're right in downtown or near a suburb, you're like to find fun LGBTQ-friendly places to go where you're totally free from harassment based on sexual orientation or gender identity. Seattle has one of the highest populations of gay and lesbian adults in the country according to Vocativ's Queer Index; notable among the city's variety of gayborhoods are Capitol Hill, where you can see drag shows at Julia's or go to Neighbours on Broadway to dance the night away, and West Seattle, home not only to many LGBTQ couples, but also to the fantastic Meander's Kitchen.

The capitol of the United States has the most gay and lesbian adults in the country, making up 10 percent of the population; it also has an LGBTQ newspaper, the Washington Blade, which chronicles local, national, and international LGBTQ news. D.C is rated as one of the top 10 places for LGBTQ singles, meaning that if you're looking to be scooped away, this might be the spot for you. Where might this scooping happen, you ask? You could head to Nellie's Sports Bar on U Street (mostly gay men) or Phase 1, a lesbian bar with dancing, pool, Jell-o wrestling, and drag king shows.

If you prefer New England beaches over the warm, sandy ones in Cali or the rocky shores of Seattle, head to Providence, RI, where there are plenty of openly LGBTQ politicians and excellent LGBTQ adoption laws. Head to events put on by the Rhode Island School of Design to meet some artsy queers; at night, go to the Dark Lady, voted the best gay bar in Providence.

This major midwestern metropolitan area has one of the highest numbers of LGBTQ-friendly businesses in the country and ranks number one when it comes to the highest the number of gay media outlets. If you're a queer lady of color, head to the QWOC hangout space at the Doll House (where they sometimes serve one dollar Jell-o shots); if you're looking for a general space to find queer culture and good people, head to the appropriately named "Boystown," mostly a mecca for gay men, and "Andersonville," with more queer lady culture. Many of the cute, queer cafes, thirft stores, bars, and sporting events take place in these areas.