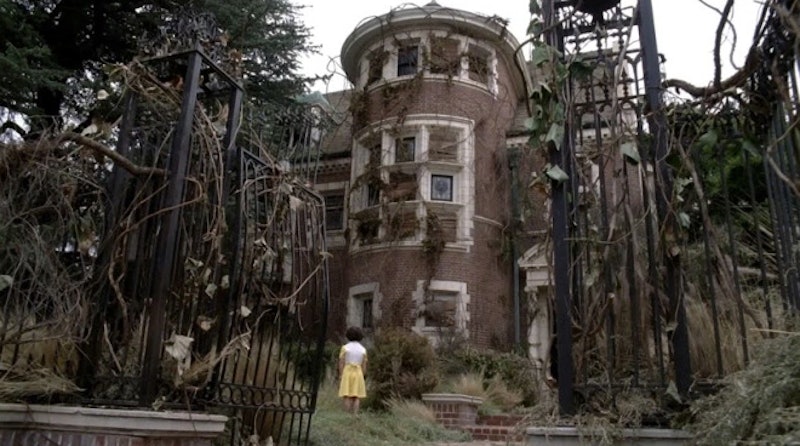 Do you have an extra $1450 laying about? Then why not use it to spend a night in the "Murder House" from American Horror Story as an Airbnb rental? The house, which is also known as the Alfred Rosenheim Mansion, has been used in countless television shows and movies including Spiderman, Seabiscuit, The X-Files, The Twilight Zone, Six Feet Under, Bones, Dexter, and Buffy the Vampire Slayer, but it's best known as the scariest home to be featured on the first season of AHS.

And it could now be yours to live in, at least temporarily. The Los Angeles historical and cultural landmark, which was built in 1908 and boasts nine bedrooms plus four and a half bathrooms, according to Variety, could be the perfect recipe for the greatest spooky house party of all time. Unfortunately, it's already been claimed — but who knows, maybe someday the option to live there will return. For now, there are a multitude of other hotels and apartments that were used as the set for horror movies that you can stay in for a night; for the right price, you can relive the horrors of each one, or if you're a scaredy cat, maybe just have a nice quiet night in and some (probably pretty creepy) room service.

1. The Yankee Pedlar Inn From The Innkeepers

This inn in Torrington, Connecticut was the setting for Ti West's 2011 indie horror film about two bored hotel employees who decide to ghost-hunt in their place of employment, The Innkeepers. In an interview with Indiewire, West spoke about how he and his crew stayed at the hotel while shooting The House of the Devil, during which time he was inspired to create another film based on the experience. Said West,

"We would go and shoot this satanic horror movie nearby, but the weirder stuff would happen back at the hotel. It just started off kind of goofy, but it became this thing where most of the cast and crew started to think there was something up with the hotel. The staff at the hotel believe it’s haunted. The whole town believes it’s haunted. So it has this kind of mystique to it."

In the 2001 sequel to Silence of the Lambs, Hannibal the Cannibal somehow managed to make it all the way to Florence, where he took a job as an assistant curator in a library in the Palazzo Capponi. This luxurious space also houses apartments, which just so happen to occasionally go up on Airbnb.

In David Lynch's Lost Highway, Bill Pullman plays a man who is accused of murdering his wife and proceeds to completely change his life and hide out as a mechanic. One of the spaces featured prominently in the film is the Death Valley art space created by Marta Beckett. According to the space's website, Beckett used to put on dance shows every evening for guests, locals, and sometimes an audience of no one. Unfortunately, she no longer does the shows, but you can still get your art fix from the murals in each room.

4. The Timberline Lodge From The Shining

Though Stephen King got his idea for this film about a man who goes crazy and attempts to murder his family from a spooky visit to the Stanley Hotel in Colorado, the Timberline Lodge in Oregon is where they shot the creepy exteriors. This space is great for those who love to ski (and be terrified).

In the 2001 remake of the horror classic Halloween, Mike Myers kills the town bully in the woods of his Illinois hometown. This scene was actually shot in the woods of Los Angeles' Griffifth Park. You can experience a bit of that thrill by taking part in the park's Great Horror Campout, an event where you can camp in the woods and be tormented all night by actors playing ghouls and ghosties.

6. Chatsworth House From The Wolfman

If you are OK with the possibility that you may be bitten by a werewolf and become a child of the moonlight, then a visit to Chatsworth House is right for you. In The Wolfman, this home of the Duke of Devonshire became the Talbot House, a home to a wealthy family with a horrible curse. You can take advantage of the cottages, hotels, or caravans on the estate, but don't forget your silver bullets.

7. Ettington Park Hotel From The Haunting

If you're already in the UK, you might as well swing on over to another massive estate turned hotel, Ettington Park. This mansion served as an exterior location for the film's Dr. John Markway, an anthropologist who takes two women who are pre-disposed to psychic phenomena to a supposedly haunted mansion. Hopefully, if you book a stay at this luxury home, the horrifying things that went down there in the film won't happen to you, but I'd write out a will before going just in case.

It's time to start saving up, because all these wonderful and spooky experiences won't come cheap. But for a lover of horror, they would all be well worth the expense.