I'd bet that many teen girls spent their weekends dancing to "Hotline Bling" — but only one of them got to have Drake himself perform it at her Bat Mitzvah. Yup, the famous rapper and the Rihanna "Work" video co-star made dreams come true on Saturday, reports Complex, when he performed his hit song at a New York City Bat Mitzvah. It's not the only time Drake has made a surprise appearance, captivating audiences with his willingness to take part in an event and have a little fun, but it's definitely one of the best. And while it's unclear how the Bat Mitzvah girl got him to perform, it clearly wasn't Drake's first time at an event like that. The rapper is Jewish, with his own Bar Mitzvah — which was depicted in his music video for "HYFR" and in his 2014 appearance on Saturday Night Live — happening years ago. He knows it's a big night for a teen.

The identity of the birthday girl and the info about how Drake got there is currently unknown, but who cares? When that Bat Mitzvah bling, it can only mean one thing — that Drake is going to make your night amazing. At the event, he sang his hit song "Hotline Bling" for the teen crowd, and the lucky birthday girl sang and danced along with the 28-year-old rapper to that song and "My Way." It all goes to show that Drake is a pro at impromptu performances that captivate us all. Watch the Bat Mitzvah videos below and revel in its cuteness.

Check out some of the rapper's other drop-in performances below.

In 2013, West brought Drake out to perform on his Yeezus Tour stop in Toronto. The singer comes in at the 1:45 mark in the video above and together, he and West put forth some rap greatness. 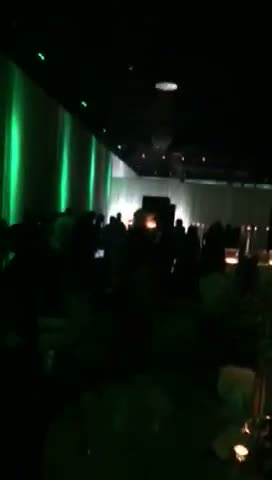 Last July, Drake attended his barber's wedding, but the rapper wanted to do more than that. He went on to give a toast at the wedding as well as perform an early version of "Hotline Bling" at the reception (video above).

In January 2015, Drake crashed comedian Red Grant's impression of the rapper at the Comedy Store in Los Angeles. Drizzy criticized the impression (but all in good fun and laughed it off) and then Grant tried to get Drake to rap for the crowd. "This is not the time for this — it's for comics and jokes," Drizzy says in the video above. "But I do appreciate you."

In 2014, Drake dropped by the Hollywood Palladium in Los Angeles to perform his verse in the song "Tuesday." And naturally, the crowd loved it.

Back in 2011, karaoke lover and international student Dee was set to perform Drake and Rihanna's "What's My Name?" for the crowd at Saddle Ranch on the Sunset Strip — and then suddenly Drake took the stage to join her. "Drake jumps up with his bodyguard behind him and was like ‘Wait, I thought I was going to do the song with you,'" she told E! News regarding the experience. Karaoke dreams come true in the video above.

Let's flashback to 2012: The Weeknd was an up-and-coming Canadian singer and fellow Canuck Drake dropped by one of his concerts at Hollywood Forever. It wasn't entirely random, though. The Weekend is credited as one of the producers of Drake's album Take Care, which included many songs The Weeknd wrote for his own album. "I gave up almost half of my album," he told Rolling Stone last year. "It's hard. I will always be thankful — if it wasn't for the light [Drake] shined on me, who knows where I'd be."