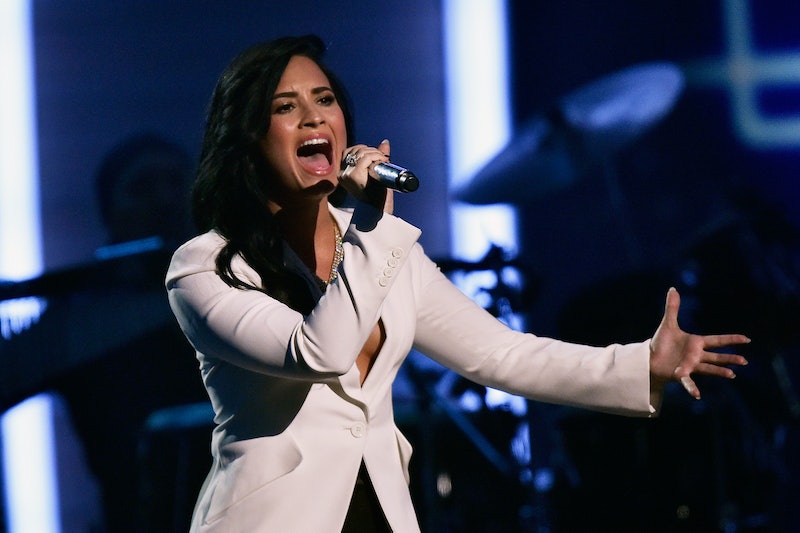 News broke on Friday that a New York Supreme Court justice had decided against Kesha's request to break her contract with Dr. Luke. In 2014, Kesha filed a lawsuit against Dr. Luke (real name Lukasz Gottwald), alleging that he sexually and verbally abused her over the course of 10 years (Gottwald has repeatedly denied these allegations and filed a countersuit against Kesha for defamation). Social media rallied around the "Tik Tok" singer by using the hashtag #FreeKesha, and celebs ranging from Kelly Clarkson to Ariana Grande showed their support for the star, who was seen crying in court on Friday. Another person on Kesha's side is Demi Lovato, who posted a series of tweets about the ruling. On Saturday afternoon, she wrote,

#FreeKesha this is only gonna make you stronger, you brave and beautiful girl. Prayers are with you @KeshaRose

That in itself is a heartfelt show of support, but Lovato wasn't done yet. Early Sunday morning, she shared even more messages about the situation, voicing her frustration at the fact that some people would dismiss women like Kesha's claims and not commend her for her bravery. This is an idea that was summed up perfectly by HuffPost Women's Emma Gray:

Kesha is a wealthy, beautiful, white celebrity working at the upper echelons of an elite industry. Yet, even these privileges don't set her apart from other victims of sexual abuse who face a justice system that often doesn't protect them. Her story sheds light on why rape remains one of the most grossly underreported crimes.

It's true that it's a frustrating justice system, and it sounds like Lovato is equally fed up.

Lovato's tweets continued by calling out other "self proclaimed feminists" who are not taking the opportunity to rally for Kesha. While this could be a possible dig at Taylor Swift, I would rather think of it as a call to action for any other women and men who view themselves as champions of feminism, but have yet to speak out on Kesha's behalf.

The "Confident" singer raises some amazing points. It's important to raise your voice if something makes you uncomfortable. If the allegations are true, then Kesha's situation would be an enormous display of injustice. And either way, she shouldn't be forced to continue working in a situation that has clearly caused her so much distress.

In 2014, back when the lawsuit was first filed, Kesha's lawyer Mark Geragos told Billboard:

As far as Lovato's emphasis on women's empowerment goes, it's important to acknowledge both sides of the coin here. Just as it's difficult for women to come forward against their alleged abusers, you can't expect everyone who considers themselves a feminist to drop everything and speak out on controversial subjects. Each person has their own level of comfort, especially with conversations about such an intense topic. However, anyone who does feel compelled to do so certainly should voice their opinions.

After all, an important aspect of women's empowerment is raising other women up; I don't think Lovato's comments should be viewed as a dig at others, just an invitation for others to join her. Props to Lovato for not being afraid to speak her mind — the world could use more fearless voices like hers.