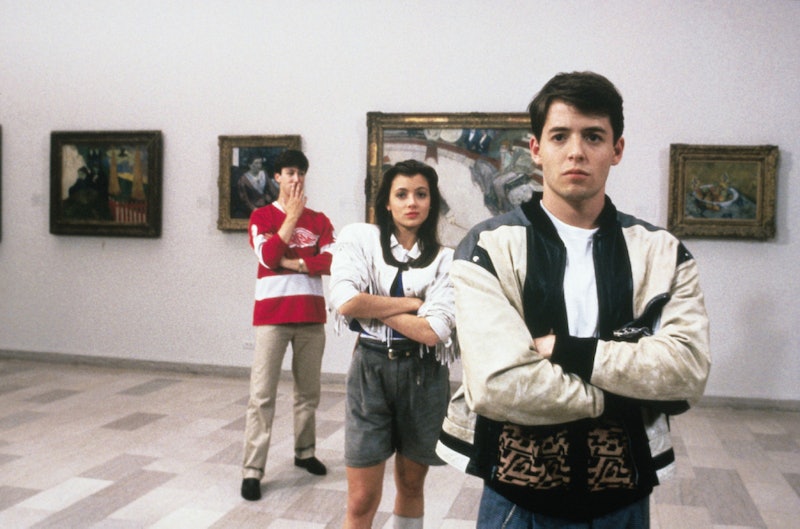 Big news, John Hughes fans: to honor the 30th anniversary of the iconic '80s film, Chicago is hosting a Ferris Bueller's Day Off- themed "Ferris Fest." As CNN reports, the festival is scheduled for May 20-22 in the Chicago area, and it will include a screening of the classic film, followed by a Q&A with some of the actors, a recreation of the iconic parade scene (of course), a replica of Ferris Bueller's room, and a bus tour of iconic places from the film. Unfortunately for those interested, the events aren't public, but instead are part of a festival pass system, with full-weekend tickets costing $300 and single-day tickets at $175.

As the many people who love the film might remember, Chicago plays a large role in the film as its primary setting, so it makes sense why the city would want to celebrate the movie. After all, its iconic scenes certainly brought a good deal of attention to some Chicago tourist sights, including the Sears Tower and the Chicago Institute of Art. The festival is a perfect fit, and it's not the first time a town, place, or organization has organized a fun celebration of a beloved associated movie, either. Here are some other festivals that have taken place or are scheduled for the future that celebrate iconic movies.

A festival that is strangely located in Illinois, not in Kansas, the Midwest Oz Fest occurs every year to honor The Wizard of Oz with a corn maze, a talk from a leading Oz scholar, and characters walking around.

JawsFest was traditionally held on Martha's Vineyard, which was where most of the film was shot, to mark major anniversaries of the film, but the high cost of hosting a festival on the island caused the planners to skip its 40th anniversary.

While not exactly a celebration of The Shining, this horror film festival takes place at the hotel that the iconic film and book was based on, and it has a lot of fun with the hotel's haunted past.

The We're Going Back festival notably took place on the date that Back To The Future jetted forward to in California.

To Kill A Mockingbird Celebration

The town of Monroeville Alabama celebrated the book's 50th anniversary with a subdued festival honoring both the novel and the film.

Yes, it exists. If you want to learn the iconic moves from the film and more, head to Lake Lure, California for its annual festival honoring Dirty Dancing.

If you don't live in Chicago, or don't have the money to spare right now, it's good to see that there are lots of cinematic festivals happening all around.