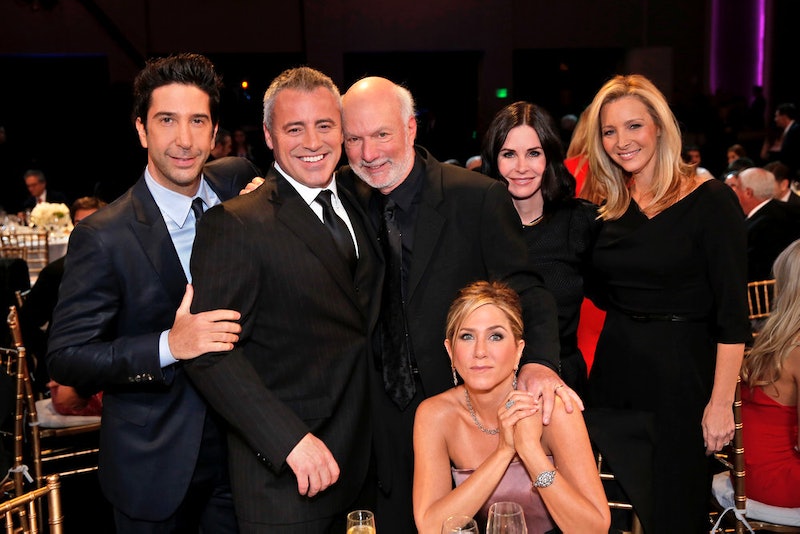 NBC was just as excited about the Friends reunion as its fans were during Must See TV: An All-Star Tribute to James Burrows. The tribute started with the Friends' theme song — The Rembrandts "I'll Be There For You" — but the Friends cast reunion didn't occur until the last portion of the two-hour special honoring the TV producer and director Burrows. Although, Chandler Bing — I mean, Matthew Perry — couldn't be in physical attendance, he did a pre-recorded video and the rest of the gang of Jennifer Aniston, Courteney Cox, Lisa Kudrow, Matt LeBlanc, and David Schwimmer showed up for Burrows and reunited onstage.

The Friends cast were definitely the belles of the ball during the Burrows tribute with the show hyping up the moment the five cast members would appear together. As interviewer Andy Cohen said on behalf of all America, "We all love seeing you together." And as I unintentionally prepped for the reunion by rewatching Seasons 4 and 5 of Friends this week on Netflix, I couldn't agree more. Cohen focused on how the actors who portrayed Ross, Rachel, Monica, Chandler, Joey, and Phoebe for 10 seasons were not only friends on-screen, but also off and LeBlanc credited Burrows with initially encouraging all of them to be nice and supportive of each other when Friends started back in 1994.

Aniston also said that it wasn't hard for the Friends to bond in real-life. "We just fell in love and adored each other instantly," Aniston said. The cast even revealed that during the first season, they would all watch the show together and help each other grow into their characters based on the episodes. Other aww-worthy moments of friendship included Cox saying the three women ate lunch everyday together for the 10 years that they were on Friends. (The dish of choice? A "Jennifer salad," which Aniston simply said she just tossed, while Cox gave her more credit for her culinary skills.) And poker nights in Burrows' dressing room, which inspired the episode "The One With All The Poker."

Although this Friends reunion wasn't enough to fill the void of the NBC show, it was fantastic to see five out of six of Central Perk's regulars all together again. And it was even more fantastic to see that the beloved Friends are still (for lack of a better word) friends after all these years. Now, back to watching Chandler, Monica, Joey, Rachel, Ross, and Phoebe on Netflix.