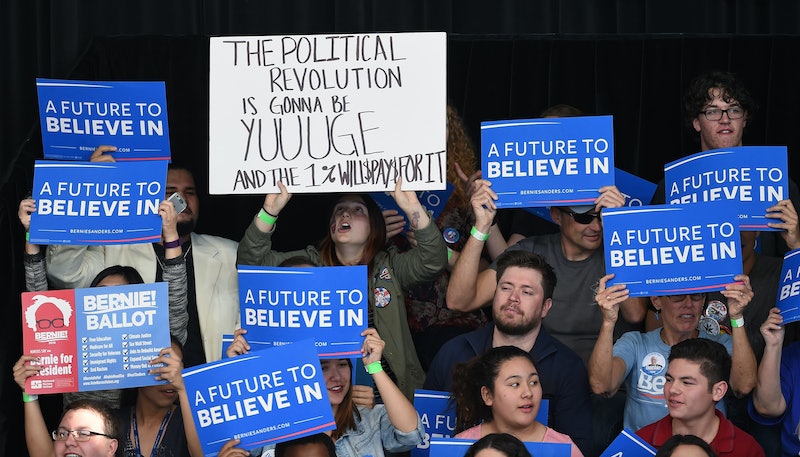 If you've heard Democratic presidential candidate Bernie Sanders campaign against the "ruling class," the Koch brothers have probably come up. Let's just say Sanders is not their biggest fan. They own the second-largest private corporation in the country, and they've used their wealth to try to influence elections. In 2012, the Koch brothers raised nearly as much as GOP candidate Mitt Romney, and they outspent the country's top ten labor unions.

This election season they're on track to spend nearly $900 million — that would put them on the same footing as the campaigns of the actual candidates who are running for president. They're the big bad business billionaire class, and yet one of the Koch brothers says he agrees with Bernie Sanders — at least on one thing. Charles Koch wrote an op-ed in The Washington Post explaining their unexpected overlap:

The senator is upset with a political and economic system that is often rigged to help the privileged few at the expense of everyone else, particularly the least advantaged. He believes that we have a two-tiered society that increasingly dooms millions of our fellow citizens to lives of poverty and hopelessness. He thinks many corporations seek and benefit from corporate welfare while ordinary citizens are denied opportunities and a level playing field.

I agree with him.

It may sound shocking: It sounds like Koch's worried about America for the some of the same reasons. But don't worry — the world has not ended — his solutions are about a 180 from all of Sanders' proposed policies. First off, even his view of the problem is not quite the same. Yes, he's worried that we live in a two-tiered society — but the two tiers are made up businesses, not people.

Small businesses are on the lower rung with big corporations a step up. In his op-ed Koch attacks the tax code for its exemptions and "special-interest carve-outs," complains about regulations on businesses, and says that government subsidies and corporate welfare shouldn't pick the winner. "Whenever we allow government to pick winners and losers, we impede progress and move further away from a society of mutual benefit," Koch wrote. But the winner would be the entrepreneur, not the elementary school teacher.

He thinks any business should be on an equal footing to get rich, and competition in the market will ensure that everyone benefits. But the way he would do that is get rid of government. Hence Sanders' solutions are not Koch's. Koch is advocating cutting social programs, while Sanders' would like to expand them.

So, no, Charles Koch is not feeling the "Bern."

I applaud the senator for giving a voice to many Americans struggling to get ahead in a system too often stacked in favor of the haves, but I disagree with his desire to expand the federal government's control over people's lives. This is what built so many barriers to opportunity in the first place.

He says we need to see results in policies and faults the War on Poverty, began under Lyndon Johnson in 1964 for failing to show results, leaving the poverty rate at nearly 15 percent some 50 years later. That ignores the fact that the legislation Johnson sponsored would later be amended; poverty at the time fell from 17 percent to 11 percent. In addition, the safety net has kept poverty rates from soaring during the recent recession.

In other words, if we were to go the Koch route of smaller government, things would undoubtedly be worse. Koch points to poverty not being eliminated as showing these programs don't work, whereas if he's really worried about a two-tiered America, he should be arguing about how to improve them so that they work better.

That's just not his M.O. Koch says he longs for a candidate that provides "peace, civility and well-being rather than conflict, contempt and division." The best way to do that would be to make sure every American has affordable healthcare, a quality education, a food on the table, and a place to call home.