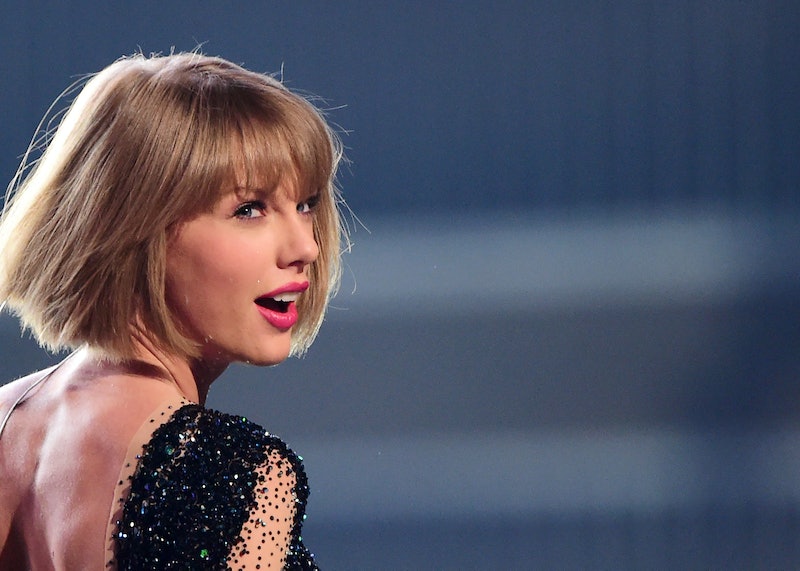 Think the bob is boring or a one-note style that you can only do so much with? Well, think again. Taylor Swift, who debuted a blunt bob with bangs at the 2016 Grammys last week, taking a bit of inspo from Vogue editor-in-chief and style queen Anna Wintour, is proving that the short, sassy, and mega chic cut is totally versatile and malleable for multiple occasions. While she opted to rock her new bob blown out while performing and accepting an armful of statues last week, the singer served as the Maid of Honor in her BFF's wedding and styled her bob in a fresh way.

See, the bob, which we predicted would be one of the biggest hair trends of 2016, works in a variety of professional and personal situations, as evidenced by the stunning T. Swift.

Instead of straight and center-parted, the "Out of the Woods" singer wore a deep side part, sideswept bands, and added some soft waves. There was just a little bend in her golden locks and it added the perfect amount of texture. The cut is the shortest that Swift has ever gone and she was still able to dress it up with the right waves.

What an amazing and wedding-approprite style, right? This was vintage Old Hollywood glam and it quickly upgraded the bob and made it look new again. It also paired wonderfully with Swift's Grecian goddess-like gown.

If you have a bob with bangs like Swift, you can totally take some inspo from her. You don't have to reserve the soft waves for a formal occasion like nuptials. You can add a little bend via a curling iron for a day at the office or for date night.

The bob totally framed her face her.

While I personally love the straight, Wintour inspo bob, you can also tuck some pieces behind the ears for a little switch up, too. See how Swift totally freshened her bob with minimal styling tricks?

The short bob with bangs really does avail itself to updates with tiny style tweaks. Swift just proved that in a few public appearances.

More like this
Doja Cat Wore Surrealist-Inspired Schiaparelli To The BBMAs
By Dominique Norman
The Very Best Quotes From Dr. Taylor Swift’s NYU Graduation Speech
By Grace Wehniainen
Machine Gun Kelly Wore A $30K Diamond Mani To The BBMAs
By Paris Giles
How To Master Baby Braids, According To TikTok
By Tomi Otekunrin
Get Even More From Bustle — Sign Up For The Newsletter