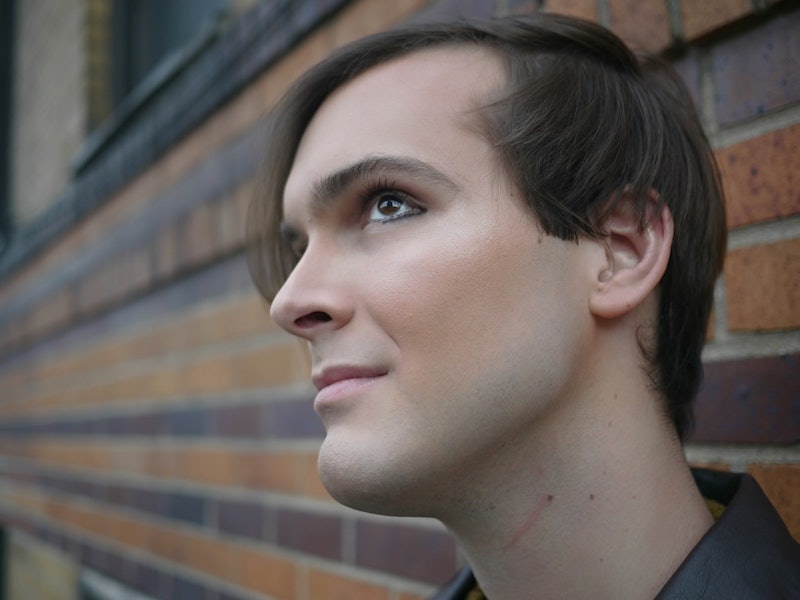 Recently, I found myself looking through photos of Kim Kardashian, and I realized that as I scrolled through each image, I was asking myself the same question. Her makeup looked amazing in the pictures, but what might her flawless contour look like in person?

Admittedly, I probably wouldn't have arrived at this burning question if I hadn't also seen a random stranger on the street sporting contouring. It occurred to me that without a Kardashian-level makeup artist, drawing dark lines all over your face and blending them might not be as unnoticeable as one would hope. In fact, this particular woman's nose contouring was the very first thing I observed about her appearance. The thought I had in that moment? "I bet she looks amazing in photos, but right now her nose looks kind of dirty and weird."

Between that and the slack-jawed hour I spent on Instagram observing the Kontouring Kween's photos, I had to figure out exactly what was going on: Does contouring look different in real life than it does in photos? Is it only noticeable if the contouring in question is amateur at best? Or does it all look relatively the same, only discernible to someone who is really looking out for it?

I decided to conduct a bit of an experiment to answer these very important, potentially life-altering questions.

Let's start with the makeup artist in action today: Me. I wear mascara and lipstick, and once when I tried to contour my face I legitimately frightened my roommate's partially blind senior dog when I walked into the room. In other words, my experience is limited and I am not even really that good at applying lip balm precisely. Not exactly Kim Kardashian glam squad material, but a fine representative of the large percentage of warm-blooded Americans who don't know what in the actual fuck contouring actually entails.

My "training" for this experiment was as follows: Look at contouring guides on the Internet. And my subject? My good friend Cooper, who explained that he became interested in the world of contouring while studying abroad in Paris. After all, he was a broke American student in one of the world's most beautiful and culturally rich cities: Naturally, countless hours of YouTube makeup tutorials found their way into his schedule. C'est la vie.

For the purposes of this experiment, I won't get into which products we used because it doesn't really matter. The important thing here is what happened after the products were applied and blended. Still, there's always room in one's heart for a pre-blend contour photo, isn't there?

Before all of you talented makeup artists grab your pitchforks fashioned out of incredibly precise cat eyeliner pencils, know that this is a very, very rough take on contouring, using a blend of liquid foundation and dark powder. I know my interpretation of contouring isn't Kardashian-approved, but I hoped it would achieve the same effect once I blended. I may have broken the Kontouring Kode, but life is all about taking risks.

After I used my beauty blender to spread all the makeup together in a way that seemed reasonable, our documentation process began. Here are the different photos we took in various lights and settings.

While we were taking this, everyone else in the room was cooing over the shots, and it's not difficult to see why: Cooper looks very glamorous, and his contour is just subtle enough to look like I actually knew what I was doing. The flash washes out skin imperfections (not to mention most of that pesky five o'clock shadow).

As you can see, this was a slightly more unforgiving scenario. Without the flash, each imperfection appears more prominent, and the lines created by the nose contouring are way too obvious. This photo might be the most honest, but it's also incredibly telling: If natural light indoors made the photos look so different from the use of the flash, how would it look outdoors?

This is where things start to get really interesting. Despite the fact that I was not using a flash, the natural light outdoors was far more forgiving than it was indoors. Kardashscience tells us that here, the contour was determined to be 99.03 percent on fleek. However, here's what happened when I took the picture from straight on.

Suddenly, the fleek factor dropped by a significant percentage, leaving the makeup artist fighting the urge to lurch back to her fourth floor walk-up laboratory. Her subject was quite unhappy about the situation as well.

After considering this vast difference for a bit, I decided that the natural beauty of a contour isn't just about the expertise of the makeup artist doing it (though I'm sure most could do better than I), but about the angle from which you view it. Without a flash, there's a chance that a straight-on shot will come out looking a little bit intense. Viewed from an angle, though, and hark, the heavens open and choirs of Beyoncés begin to sing and you are the most perfect, chiseled being to every grace this planet.

Clearly, even Cooper was moved by the drama and intrigue of it all. And despite my satisfaction with my conclusions, I wanted to experiment with one other medium — one that I feel is much more reflective of how things appear in real life: Video. While I was so busy trying to figure out how contouring appeared differently in photos versus face to face, I neglected to realize a crucial part of the story: When you're contoured, do you see yourself differently?

You heard him: Seeing himself in a photo versus seeing himself in the mirror was a strikingly different (and yes, slightly disturbing) experience. Granted, the outcome might have been different had he been contoured by an expert instead of a "skilled amateur," but aren't most of us coming from the latter perspective anyways? What looks good in tutorials or on Instagram might look a little hellish in real life. But then again, when your cheekbones look this good from the right angle, it might all be worth it.

More like this
What Are "Gym Lips" & Why Is BeautyTok So Obsessed With Them?
By Olivia Rose Ferreiro
Kim Kardashian's Ombré Pink Mani Features A Nod To BF Pete Davidson
By Paris Giles
19 Memorial Day Beauty Sales To Shop In 2022
By Audrey Noble
5 Easy (& Wearable) Red Eyeliner Looks To Try
By Olivia Rose Ferreiro
Get Even More From Bustle — Sign Up For The Newsletter