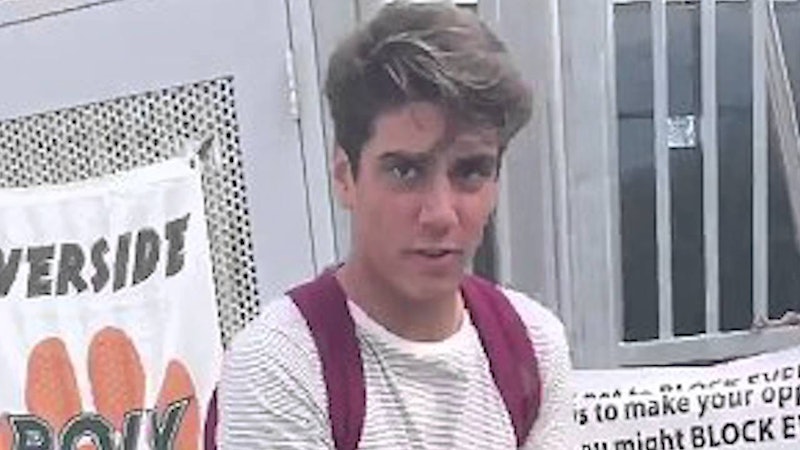 If you've been on the Internet at all over the past few days, you've probably wondered who is "Damn Daniel", and why is everyone talking about his Vans? Fortunately, I'm here to clear the air for you, and try to make sense of a phenomenon that is the "Damn Daniel" meme. Spoiler alert: this has about as much logic as Alex from Target meme in 2014 (except hold onto your chair, because this is even more insane yet fantastically hilarious).

Last Monday, a high schooler named Josh uploaded a video featuring a few different segments of his friend Daniel walking around, on top of which he narrated "Damn, Daniel," along with a running commentary on his white Vans sneakers. For reasons unbeknownst to really, uh, anyone, the video was retweeted more than 250,000 times, and it's become nothing short of a phenomenon.

Daniel Lara now has almost 150,000 followers on Twitter, and is understandably stoked at what's going on. His video has prompted all kinds of things to arise out of the strange corners of the Internet, including a "Damn Daniel Starter Pack" which consists of white Vans, jeans, a t-shirt and a red backpack; dance routines; remixes of the 30-second audio, and all kinds of other shenanigans. Needless to say, the video is officially meme-famous, with people going as far as taking pictures of their white sneakers in bathroom stalls and posting: "Thinkin' about you, Daniel."

But who exactly is Daniel Lara? According to his Twitter page, he's a teen living in Los Angeles, California (who clearly knows how to dress to impress). His username is danlaraa on Instagram, which, despite only having five photos, has already amassed 195,000 followers. In one of his photos, he even shows us what he is wearing on his feet on the rare day that he is not spotted in his white Vans. (PLOT TWIST, you guys: it's black Vans.) Although he hasn't said much yet the meme started trending, he has expressed his gratitude to his many thousands of new fans:

As with most things on the World Wide Web, it's hard to say whether or not this will be just a passing trend, or if Daniel will be with us for the long-haul. Check out the original video below, and some notable tweets from fellow humans partaking in the method and madness that is this boy named Daniel, who is now the only thing your friends will be talking about for at least another week.

Even Daniel Radcliffe Has Been #Inspired

Yep, Just As You Thought

A Work Of Art, If You've Ever Seen One

Your Childhood Will Never Be The Same

Whoever you are, Daniel Lara, thank you for giving us all some much needed distraction from our day jobs, and for giving us a way to torture your fellow Daniels until the end of time.