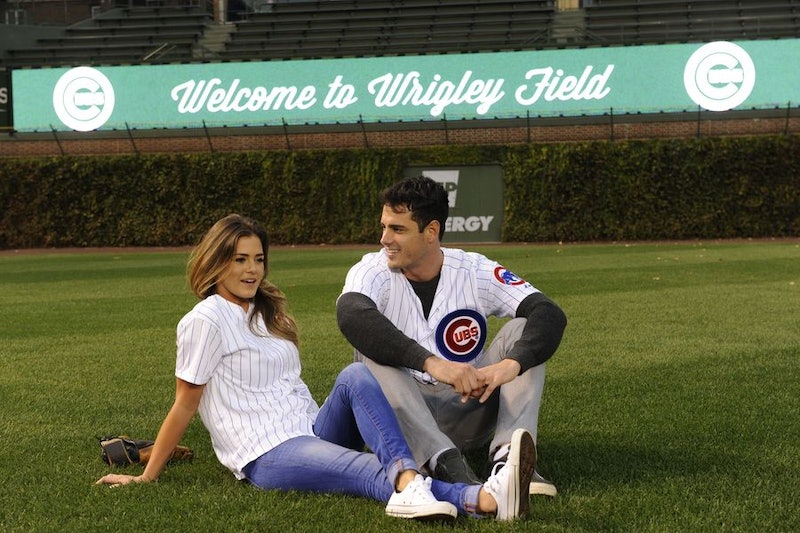 On Monday night's episode of The Bachelor, Joelle "JoJo" Fletcher is the center of some serious drama. The previews show that while she's in Texas with Ben Higgins for hometowns, JoJo's ex-boyfriend Chad sends her a letter, possibly in an attempt to win her back. All I know is that the promo showed the last line of the letter which read, "I will love you with all of my heart! Love, Chad XOXO." But, who is JoJo's ex Chad? Whoever he is, he's sure to cause some problems for Ben and JoJo.

Ben and the remaining women have certainly experienced their fair share of drama this season, with discord amongst aggressive Olivia and Amanda, Leah and Lauren B., and Lauren B. and everyone else. But the preview for Monday looks like it's really upping the ante. JoJo's brothers appear to be giving Ben a particularly hard time, with one even accusing Ben of "brainwashing these girls way too much" (with absolutely zero evidence, as far as I can tell, having actually watched the season unlike her brothers at that point). But, the dramatics don't end there for JoJo since we know Chad's letter (and maybe Chad himself?) make an appearance in the episode.

Here's everything you need to know about her ex:

His Name Is Chad Rookstool

The ominous trailer showed JoJo picking up a card signed "Chad." According to OkHereIsTheSituation Chad's last name is Rookstool. And, according to a Yahoo! interview with Chris Harrison, it hasn't been long since the two were together, with Harrison saying that JoJo "recently went through a breakup" prior to joining the show.

He Owns A Salon In Dallas

According to the Chad Rookstool Salon website, Chad has been in the hair industry for 17 years. The stylist seems to be doing well for himself, owning an eponymous salon that seems to be quite successful. That's no small feat, and also perhaps why JoJo's hair always looks so incredibly flawless if she learned from the best. Though Ben does know his way around a barrette, he might be feeling some real competition if Chad gets into the game.

He Spends A Lot Of Time With JoJo's Dog

Both JoJo and Chad have multiple Instagram posts with Jackson, a young pointer. According to RealitySteve Chad cared for JoJo's dog while she was on the show, but he seems to be getting pretty chummy with the animal in posts as recent as a week ago as well.

They Didn't Break Up That Long Ago

It seems as though the wound from this break up could still be fresh. On her first one-on-one date with Ben, JoJo revealed that the two of them had split up mere months before she met Ben. JoJo also claimed that Chad broke up with her. If The Bachelor started filming not too long after that, that could be a cause for some of the emotions being hinted at in the preview. Perhaps JoJo wasn't quite ready to move on? Maybe Chad wasn't ready to lose her forever? We'll find out more on Monday night!

More like this
This 'Bachelor' Contestant Had The Best Reaction To Wearing The Same Dress As Another Woman
By Grace Wehniainen
A Guide To All Of Zach Shallcross' 'Bachelor' Filming Locations
By Brad Witter
The Bachelor’s Greer Blitzer Apologized For “Uneducated, Ignorant” Past Tweets
By Brad Witter
Brooklyn From 'The Bachelor' May Have Accidentally Predicted Her Time On The Show On IG
By Grace Wehniainen
Get Even More From Bustle — Sign Up For The Newsletter
From hair trends to relationship advice, our daily newsletter has everything you need to sound like a person who’s on TikTok, even if you aren’t.