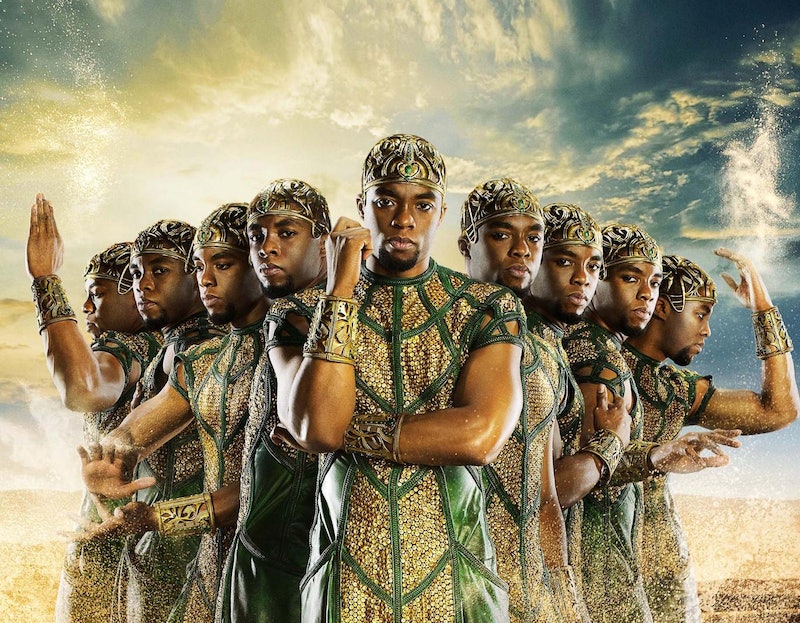 The new movie Gods of Egypt looks, for lack of a better word, insane. The trailers depict a flashy, CGI world full of crazy effects, intense dialogue, and enough drama to fill the Great Pyramid of Giza. Yet despite its clearly 2016-made craziness, the film actually draws the bulk of its characters from real Egyptian history. The gods in the movie were worshipped by the people of Ancient Egypt for centuries, but for the most part they're far less familiar to Western audiences than their Greek or Norse counterparts. So just who are the Gods of Egypt?

The Ancient Egyptian religion is a tough one to pin down. It lasted for around 3,000 years, with its roots starting sometime in Egypt's prehistorical period. Like many ancient belief systems, the Egyptians attributed natural phenomena that they didn't understand to various deities. The gods were also given human-like attributes and backstories, often engaging in jealous or murderous behavior within their respective family dynamics. One of these stories, about the rivalry for the Egyptian Throne between the gods Horus and Set, provides the main plot for Gods of Egypt . And since the religion lasted such a long time, the gods often saw their statuses change over time. In some myths, for example, Horus and Set are brothers, and in others they're uncle and nephew. Horus also eventually became merged with the god Ra, and the two were worshipped as one deity known as Ra-Horakhty.

I know this can all get a little confusing, so here's a basic rundown of the gods you can expect to see playing a part in Gods of Egypt.

Played by Nikolaj Coster-Waldau in the film as the main protagonist among the gods, Horus was the God of the Sky and one of the most important of Egyptian deities. Often depicted with the head of a falcon, Ancient Egyptians believed the Pharaoh to be the living embodiment of Horus. The movie taps into this a bit, with Horus needing to save Egypt by reclaiming the throne from Set.

Set, who is also sometimes referred to as Seth, is played by Gerard Butler in the film. He was the main rival of Horus, the murderer of Horus's father, Osiris, and was also responsible for ripping out Horus's eye. He was the God of the Desert, and his associated animal was a doglike creature that is unknown in modern times.

Played by Élodie Yung, Hathor was the Goddess of Love, and was one of the more prominent gods worshipped. She also represented fertility, and was associated with the cow. In the film, she has to decide between continuing to let Set rule or joining forces with Horus, and her power could tip the scales in either direction.

The God of Wisdom, Thoth is brought to life by Chadwick Boseman in the movie. He was associated with the Ibis in mythology, and was considered the progenitor of science and writing. In the movie, he is shown to have the ability to clone himself, and his wise counsel is sought by Horus.

The Sun God, Ra was at times considered to be the most important of all the deities in Ancient Egypt. He is shown in the film as being an older god, played by Geoffrey Rush, and is the creator of the world. His endorsement could go a long way toward deciding who wins the battle between Horus and Set. Like Horus, he was also associated with the falcon.

The God of the Underworld, associated with the jackal, Anubis makes for a pretty intimidating figure. Not much is known about his role in the film, as this CGI incarnation is the only photo released of him. He is played by Bryan Brown in the film.

Anat was worshipped in other regions before making her way to Egypt, and was a War Goddess. Once she was absorbed into the Egyptian religion, she became an ally of Set, and it seems she'll keep that job in the film. Abbey Lee, who plays the character via CGI motion capture, told Collider she is an "albino, serpent-riding assassin". You know, that old chestnut.

There are probably a few more gods kicking around in the film, but these are the deities who have been revealed so far. And although you shouldn't expect the movie to be any kind of history lesson on Egyptian mythology, it is nice to see these largely forgotten deities getting some attention in modern times.