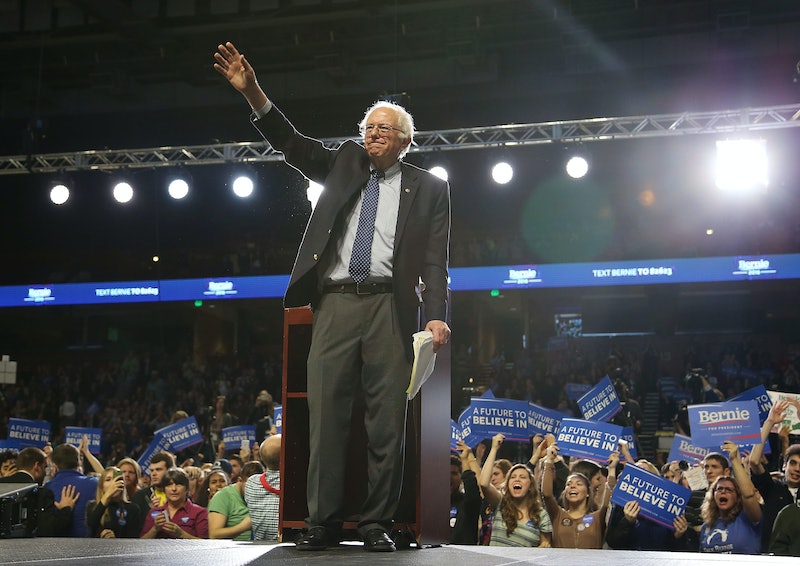 Sen. Bernie Sanders isn't exactly an open book about his personal life, but the precious few words he has said about his father leave us hungry for more. Who was Bernie's father, Eli Sanders? We know from the little Bernie has given us that Eli was a Polish immigrant, that he was a paint salesman, that he never made much money, but that's about it. We can find out more thanks to the internet, and to Bernie's brother, Larry.

Eli Sanders left his home of Slopnice, Poland, in 1921 at the age of 17 to pursue the American dream, with no money and barely any ability to speak English, as his son has told us. Eli had dropped out of high school, according to Time. Most of Eli's relatives in Poland were later murdered during the Holocaust, reported Tablet. Settling in New York City, Eli married a native New Yorker named Dorothy Glassberg and had two children: Lawrence ("Larry") Sanders, born in 1934, and Bernard ("Bernie") Sanders in 1941. Eli Sanders raised his family in Flatbush, Brooklyn, and he provided for his family but, Bernie has noted, they were never able to fulfill his mom's dreams of moving out of a rent-controlled apartment.

The lack of money was an emotional issue for Eli, a factor that likely contributed to Bernie's emphasis on economic justice as a politician. According to Time, Eli began to cry at a performance of Death of a Salesman, because he was moved by character Willy Loman's underemployment crisis. The family's economic hardships were likely why Eli was a supporter of New Deal programs, according to Larry. Though the family didn't directly benefit, Larry told Seven Days VT that his father "always believed it was the right thing to do. We lived in an environment where New Deal politics were quite normal. It was widely understood that the government could do good things." Bernie has credited Larry with getting him into politics, and it would appear his big brother was influenced by his father.

Eli became a widower when Dorothy died young in 1959, according to Tablet. Larry told Seven Days VT that Dorothy's death left Eli "desperately depressed," and Larry took time off law school to be with his dad. Eli passed away not long after in 1962.

By all accounts, Eli Sanders had a tough life. He left his family and home as a boy, worked hard, struggled financially, lost his wife, and died at a fairly young age himself. But Eli also raised two politically conscious, intelligent, compassionate, and successful sons, something any parent would be proud of. It is a great shame that Eli and Dorothy didn't get to see their sons do so well in life (Larry is a politician, too). But their lessons live on through their boys.