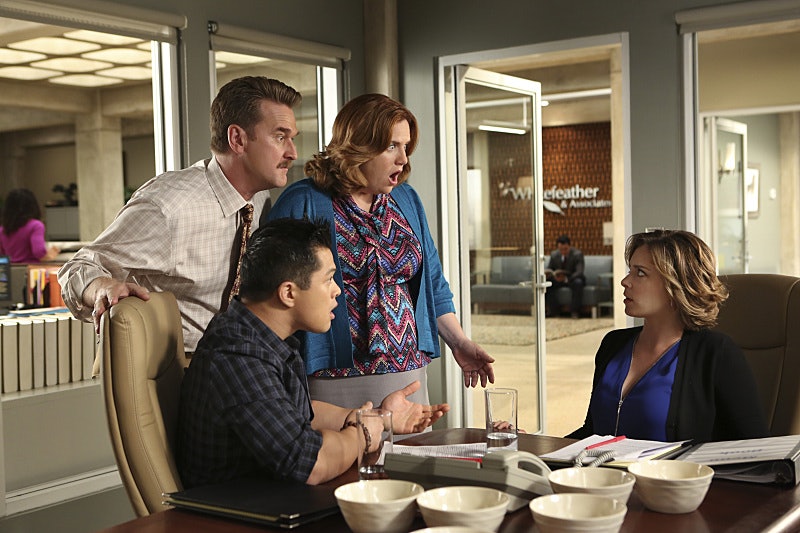 Yeah, that headline, you probably already knew that's a good rule of thumb to follow in life. However, when you have an episode like Crazy Ex-Girlfriend did on Monday night exploring what happens when a woman's feelings for a man affects her career, it bears repeating. And when we don't exactly know how this whole situation for Rebecca is going to end up, that's especially the case.

After Rebecca basically ruined everything with Josh in the last episode of Crazy Ex-Girlfriend, she was going to do just about whatever it took to get their relationship back on track. This meant an elaborate plan orchestrated by Paula involving a not-so-random meeting at the auto shop, a coupon for free drinks and appetizers at Jalapeño Jack's, and Rebecca's fictional relationship with a real man named Trent. Unfortunately, all of Paula's efforts ended up in a group hang between Rebecca, Josh, and a bunch of Josh's friends, which was secretly set up by Josh, by the by, and which was no bueno in terms of rekindling Rebecca and Josh's budding flirtmance.

But of course when one plan fails, Rebecca always has another one up her sleeves. After overhearing her Canadian colleague opine about how annoying it is to have to spend so much time with his client, Rebecca got the bright idea to represent Josh in a case against his landlord, who hadn't done anything about the absence of warm water in his apartment complex.

Josh is very naive, so he didn't realize that Rebecca had ulterior motives here. In fact, no matter how many schemes Rebecca performs, Josh never seems to realize that. But by now, Valencia and Greg are very hip to Rebecca's tricks, so they teamed up to convince Josh to not pursue this case with Rebecca.

They were successful in doing so at first, but after Rebecca convinced all of Josh's neighbors to sign onto this lawsuit (in a song that parodied "Ya Got Trouble" from The Music Man that warmed my musical theater-loving heart) that could net all of the tenants way more moolah than Rebecca had initially anticipated, Josh agreed to move forward with the case.

After spending night after night going over the details of the case with Josh over takeout dinners, Rebecca was practically in Heaven. However, her dreams almost came crashing down when the landlord called and said he wanted to settle the case for $1 million, which would have gotten Josh and his fellow tenants a ton of money each. Everyone told Rebecca to take the deal, but she wasn't quite ready to give up her legal dates with Josh. Instead, she tracked down a "water truther" whose flyer she found on the wall of Jalapeño Jack's and discovered that there's an even bigger conspiracy going on with the water at Josh's apartment complex that has a major corporation behind it and could earn the plaintiffs a whole lot of dough.

So it looks like Rebecca is going to move forward with the case, and technically it could work out for her and not end in disaster. However, even when Rebecca discovered that there's a major case here, all she was still concerned with was winning Josh's heart, not advancing her own career. Of course, Crazy Ex-Girlfriend wants us to recognize the absurdity of the situation. That's the whole point. But I can't help but continue to feel sad for Rebecca as she continues to make seemingly detrimental life decisions. I hope she gets a win, be it personal or professional, sometime soon.