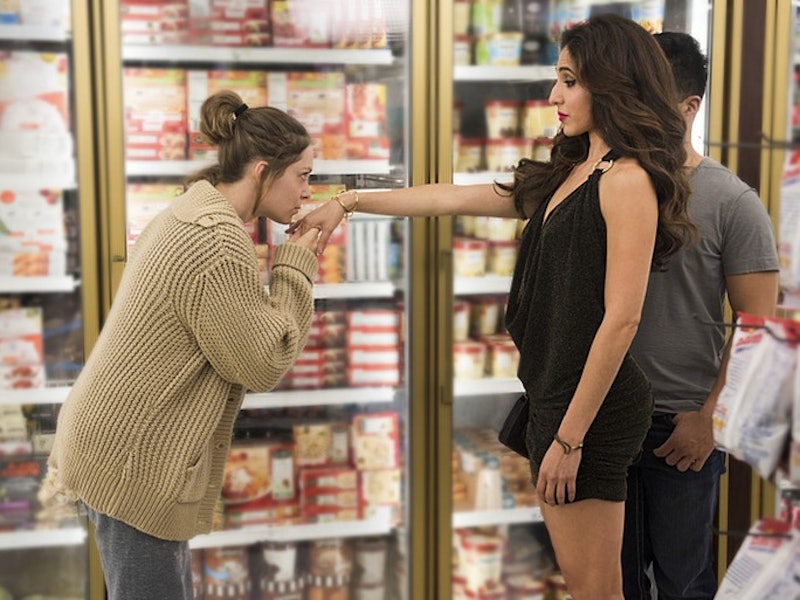 When it comes to TV shows, I'm usually pretty down for grossness, as long as it comes from a place of honesty. Give me your Girls-level sexcapades, your Broad City-esque toilet humor or your Game of Thrones-equivalent Red Weddings, and trust me, I'll watch. So it was no surprise that I was so thrilled when The CW's breakout musical comedy series, Crazy Ex-Girlfriend, launched right into its first memorable song-and-dance number, with protagonist Rebecca Bunch shimmying into a pair of tiny Spanx, burning her neck with a curling iron and spackling her bathtub with blood in attempt to rip off a strip of hot wax. Even better? That scene was just one of the many great feminist moments that Crazy Ex-Girlfriend has gifted fans so far during its short but so far fantastic run.

Seriously, this show is filled with great feminist shoutouts and moments, and it's a rare gem of high-quality, female-fronted primetime TV. So, in celebration of the show's first six episodes and the great messages that it's spreading about women week after week, here are the eight best feminist moments from Crazy Ex-Girlfriend thus far.

1. When Rebecca Totally Called Out Her Friends For Their Sexism

Right from the credits, when animated versions of the show's supporting cast sing the show's title to her, Rebecca retorts: "That's a sexist term [...] The situation is a lot more nuanced than that."

2. When It Referenced "Patriarchal Bullsh*t"

After witnessing Rebecca's rigid pre-date beauty regime, a male rapper notes, "This is horrifying. Like some scary movie or something... Like some, nasty-ass patriarchal bullsh*t."

The way Rachel brazenly acknowledges the stereotype of women needing approval from female friends is brilliant.

That scene when Rachel takes home a guy she meets on Tinder and simultaneously spoofs Beyonce's "Partition" is too, too perfect.

5. Every Time Rebecca Wasn't Accused Of Being Bossy

Rebecca Olivia Pope-level kills at her job, but she has yet to be accused of being bossy. Very, very cool.

6. When Rebecca Faced Her Fears

I adore seeing Rebecca's older coworker, Paula, encourage her to face her fears in the most ridiculous ways possible.

7. When Paula Told Rebecca How Confident She Was

One great scene has Paula telling Rebecca, "You're a smart confident woman in charge of your own destiny. That sounded like a tampon commercial."

Especially the scene in which Paula recalls, "I period-ed on an ultra suede settee in 1987 at Roberta Janatelli's condo and I gotta tell you it was still a great party. I wrapped a sweater around my waist, then hooked up with Bobby Henderson anyway! And I started the whole sweater-around-the-waist trend! So, you're welcome."

So there you have it: no matter what it's doing, Crazy Ex-Girlfriend manages to find empowerment through its ability to simultaneously mock and embrace stereotypes of women like no other show on television right now. If you need me at 8 p.m. on Monday nights, you know where I'll be.