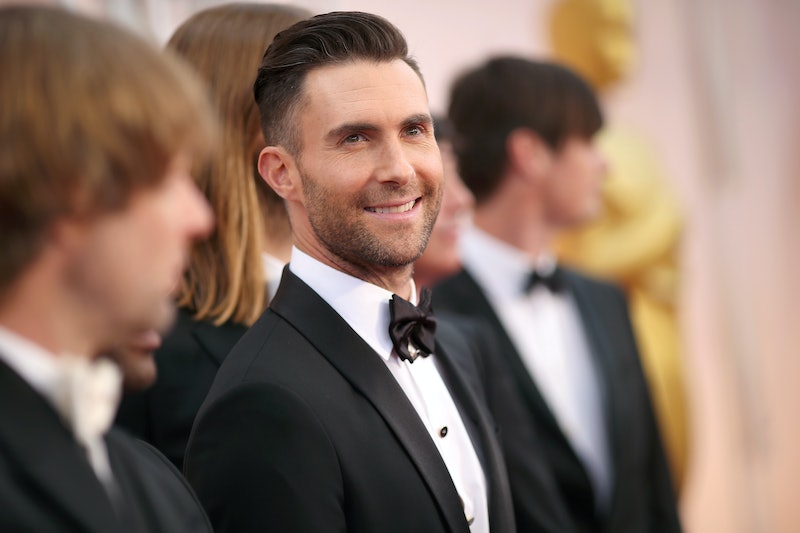 It takes serious commitment and a genuine love for body art to get something as epic as Adam Levine's full back tattoo, which the singer proudly revealed for the first time today. The process of getting his entire back covered in ink took half a year to make, thanks to the skillful hands of California-based tattoo artist Bryan Randolph. Levine shared a photo of the finished product on Instagram.

"Six months in the making," he said. "Thanks @bryanrandolph for absolutely blowing my mind with this one! Woooo hooooo!!!!" Levine's back tattoo features a siren — a winged mermaid from Greek mythology — holding a skull. The creature is surrounded by the ocean, with a ship on one side and the rising sun on the other. His wife, Victoria's Secret model Behati Prinsloo, posted a photo of Levine getting his full back tattoo done at home last November.

While the siren is the latest addition to Levine's growing collection of body art, the new design also covers up two old tattoos, a pinup girl and an animal paw in honor of his pet dog Frankie. The singer has yet to reveal the meaning behind his new tat, but the impressive new ink puts Levine in the same company of celebrities with back tattoos, including Kim Kardashian, Ben Affleck, and David Beckham.

Prinsloo gave a sneak peek of Levine's back tattoo a few months ago.

Aside from his entire back, here's where else Adam Levine sports tattoos on his body:

The Maroon 5 frontman has a guitar on his left forearm and a tiger on the right.

Levine commemorated his band's 10th anniversary with an "X" tattoo.

He sports a "Los Angeles" tat on his shoulder. Hometown love!

One of Levine's most well-known tattoos is an eagle right below his chest. He also has a sun near his upper right shoulder and a shark on the side of his torso.