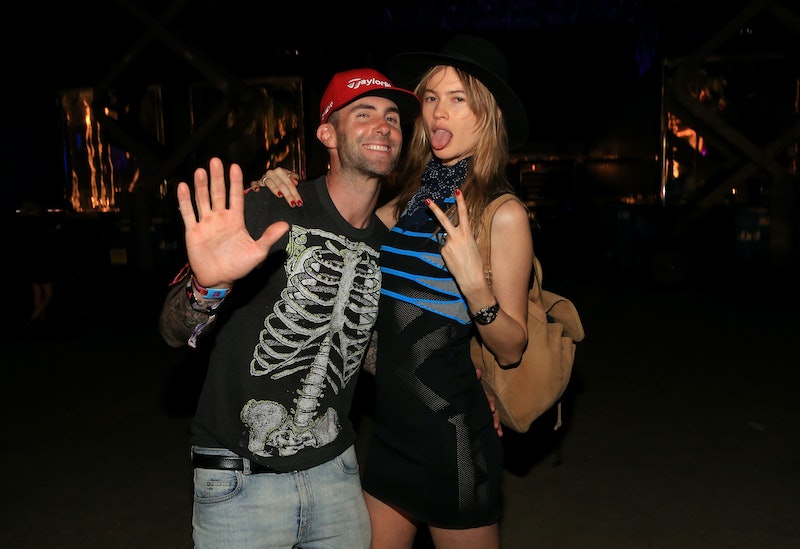 Not all, but some couples on Instagram take the fun and spontaneity out of uploading a new pic. It may sound a bit harsh, but you know what I mean. Some people are just so over-the-top with their lovey dovey-ness that it makes the rest of us scroll past in fury as we roll our eyes. Thankfully, married celeb couple, Adam Levine and Behati Prinsloo, are a different breed of Instagram duo. Their pictures aren’t cliché or typical or trite. They’re fun and weird and they make a relationship seem like a party everyone wants to go to. Even the more cynical among us.

As Just Jared points out, Prinsloo posted a simple yet poignant quote to her Instagram on July 20 to commemorate the couple's first wedding anniversary. But only a day after that, they was at it again revealing Levine's newly shaved head. These two move seamlessly between slightly cheesy and totally chill, and that's what's so great about them.

So, in honor of their first year together and their cool couple status, let’s take a look at Adam Levine and Behati Prinsloo’s quirkiest Instagram pictures. I assure you, your faith in genuine, weird, wonderful love will be restored.

1. When They Posed For A Photo While Dripping In (Fake) Blood

2. That Time They Were Pool-Time Fun Champions

My 7-year-old self bows to their greatness and creativity.

Trust. That's what relationships are all about, right?

4. When They Were Coachella Outlaws...

5. When They May Have Actually Found A Working Time Machine And Travelled To The '80s

It's too good. They look too natural.

7. When They Made This Trippy Little Video/GIF Thing

Pretty sure they could have fun in a paper bag.

8. When They Became Human Transformers

9. When They Dressed Down Their Leather Jackets With Exposed Tongues

Dressed to... possibly take a nap right after this picture.

10. When They Submitted A Late Audition For American Horror Story: Coven

11. When They Mean Mugged It

Though the cat ears do sorta take away from the ferociousness.

12. When They Made Golf Cart Riding Look Impossibly Cool

Ugh. Take me with you guys.