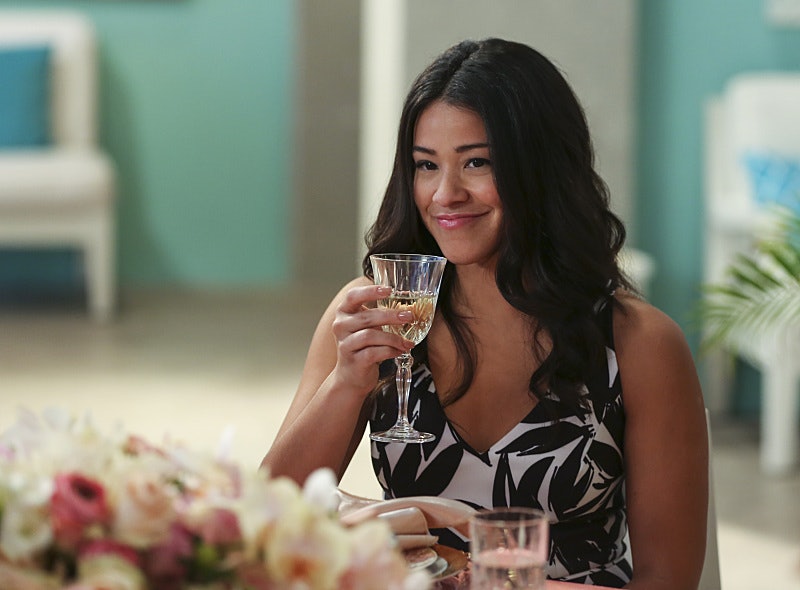 On behalf of Team Michael 'shippers everywhere, let me be the first to say IT'S ABOUT TIME! Every since the show began, viewers have been eager to see which guy would inevitably win over our beloved heroine's heart. Would Jane choose to be with Michael or would she fall for her baby daddy Rafael? And at long last, Monday night's episode finally brought that decision to its inevitable conclusion by having Jane tell Michael that she still loves him. That's right, my friends — Jane and Michael are back together on Jane the Virgin and I, for one, could not be more thrilled with this outcome.

Throughout the entire episode, Jane contemplated losing her virginity to Jonathan, but when she was on her way to do the deed, a police officer's badge reminded her of Michael and suddenly she just couldn't bring herself to do it. Why? Because she didn't want her first time to be with some sort of casual fling. She wanted it to be with someone she loves and that person just so happens to be Michael. The only problem was, he's been trying to keep his distance from her until he could close the Sin Rostro case. But now that Rose is apparently dead (thanks to Mutter), Michael immediately rushed over to speak with Jane and declare his true feelings for her. And when he asked whether or not she still loved him, she responded with a resounding "YES!"

Now, obviously, our girl Jane is fiercely independent and doesn't need to be with a man in order to feel complete, but that doesn't she also doesn't deserve happiness and romance with someone she truly cares about. We've watched these two secretly pine after each other for months and months. They've come so close to reuniting only to have it ripped away from them moments later. But this time, it looks like the decision is going to stick. Granted, I'm sure they'll still run into a ton of obstacles along the way, but for now let's just relish in their adorable romantic bliss. I can't wait to see what this rejuvenated relationship has in store. Also, #TeamMichaelForever!