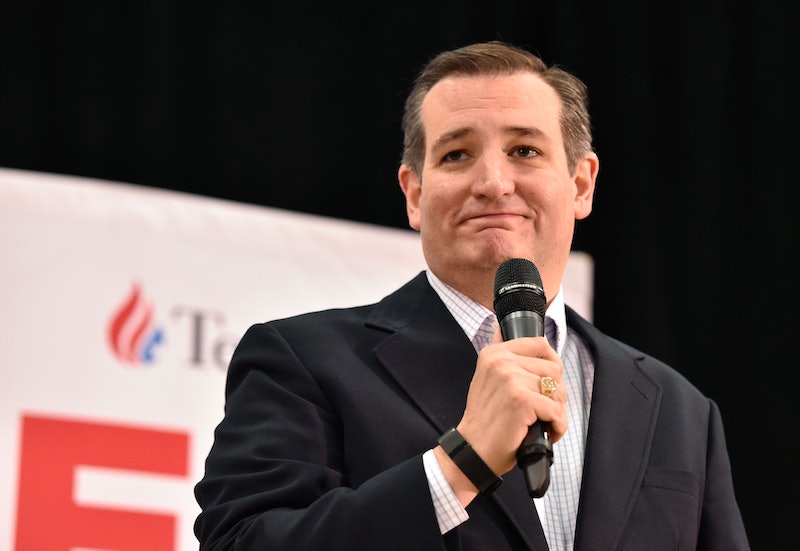 As they say, everything is bigger in Texas. The Lone Star State even lives up to that reputation when it comes to the number of delegates it awards on Super Tuesday, particularly in the GOP. Clocking an impressive 155 delegates, Texas easily beats out all of the other Super Tuesday states. So the GOP candidates vying for a boost in the polls come March 1 will more than likely be setting their sights on those delegates (perhaps the Texas-born Jeb Bush dropped out just a few days too early after all). A win there would be crucial for any of the candidates — who, aside from Donald Trump, all place within an easily passable range of one another.

Trump is currently winning the primary race with 67 delegates, while Ted Cruz and Marco Rubio share only one delegate difference (Cruz's 11 to Rubio's 10). Even John Kasich and Ben Carson — who, despite momentary jumps in the polls, have been more quiet than the top three candidates — could be greatly helped out by Texas. And since the Lone State State accounts for nearly a fourth of all GOP delegates awarded on Super Tuesday, a victory there could push a candidate that much closer to a nomination.

The Republican's last showdown before Super Tuesday took place in Texas' most populated city, Houston. This past week's heated debate showed just how far the candidates would go to court Texas voters. Tuesday's greatest prize seemed to slip out of some candidates' hands, while others only tightened their hold over it. Regardless of any of the debate results, one candidate certainly has a large stake in the Texas primary election: Cruz. The Texas senator is expected to win by a large margin in the state, which he's represented in various capacities for the last 13 years. If Cruz wins only by a slight margin, or loses altogether, then Trump is expected to take the senator's state and turn it against him. A victory here for Cruz could inch him closer to beating out Trump, but a loss could spell out the beginning of the end for his shot at the GOP nomination.

Though it obviously has to compete with the other states participating in Super Tuesday, the Lone Star State has an undeniable appeal for the GOP candidates. Texas could very well be the difference between a Trump, Cruz, or Rubio nomination — or, at the very least, a solid pathway to it.

Believe it or not, both primaries and caucuses can be laugh-out-loud hilarious. Don't believe us? Have a listen to Bustle's "The Chat Room" podcast …